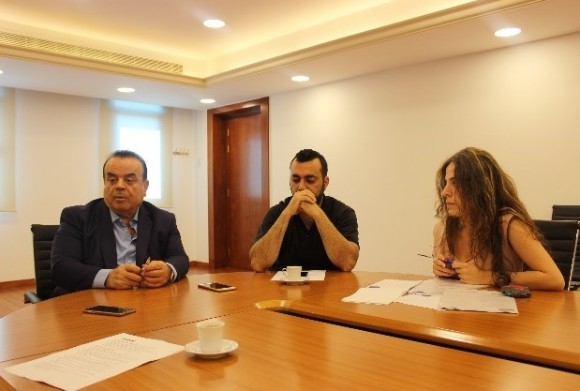 Only seven kilometres away from bustling Beirut, the Jdeideh-Baouchrieh-Sed (JBS) region is home to several industrial giants and dynamic commercial streets. In recent years, JBS has received diminished governmental financial support, which is accentuated by the current economic recession in Lebanon. In addition, environmental issues have been aggravated by unplanned constructions, increased water and air pollution, rising levels of household waste, and decreased green spaces in industrial and commercial zones. 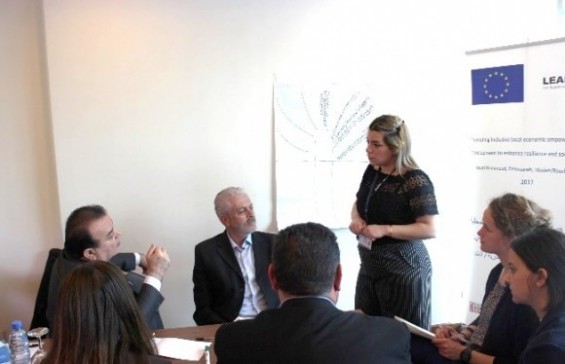 ACTED 2017
Head of Municipality Mr.Antoine Jbara, during the JBS Dialogue Table with ACTED

Group discussions with various local stakeholders and government officials led to the development of project proposals for JBS, focused mainly on basic service delivery improvements such as waste management, health services, and on economic development opportunities. Through the LEADERS consortium, ACTED will implement a holistic renovation project in selected streets of JBS in collaboration with local partners and stakeholders, with the aim of improving the environmental and economic health of the region as well as fostering social cohesion among communities. The proposed projects will include sidewalk renovations, creating green spaces in urban areas, and installing city bike rails. These renovations will offer the opportunity for events such as street festivals, car-free days, and other cultural activities. These activities will revive the economy at a local level, and foster greater social cohesion among the various communities of JBS and surrounding neighborhoods.

The Municipality of Jdeideh-Baouchrieh-Sed has been an active partner since the beginning of the LEADERS programme. Across the implementation stage, several meetings and field visits have been held with ACTED and the Municipality, allowing collaborative discussion on the key needs and optimal projects within the area.

Social Worker Ms. Daisy Saba stressed that the local community must be engaged in social and economic development projects, stating: “Everyone present during the discussions seemed extremely interested with the topics and solutions brought to the table”.

The Head of JBS Municipality, Mr. Antoine Jbara, also spoke to ACTED about the Municipality’s views of the project, and ACTED’s approach to the problems faced by JBS. He stated: “Cooperation and communication are very important for our Municipality when addressing the issues we face on a daily basis, both of which were beautifully present during ACTED discussions and dialogue tables.”

A local authority point of view

Mukhtar Kamal Abdelmassih of the JBS Municipality is an active part of LEADER’s community working group in his area as part of the holistic “Promoting inclusive local economic empowerment and development to enhance resilience and social stability” project funded by the EU Regional Trust Fund in response to the Syria Crisis – The MADAD Fund. He shared his experience with LEADERS:

“It’s great to see that the JBS Municipality is taking part in such an empowering initiative that presents efficient, effective and simple solutions to a number of health, environmental and social issues.. The platform allowed everyone to discuss the topics that most interest our community which boost both our area’s economy and social cohesion, from sidewalk renovations, to street-markets, and women empowerment activities.”

A private sector point of view

Mr. Bechara Azar is a business owner and consultant in the JBS Municipality and also an active part of LEADER’s community working group in his area. “I’m proud to have been part of a platform where everyone is able to present their ideas and share their concerns about the topics that most interest our community. Initiatives that meet the needs of Jdeideh – Baouchrieh – Sed residents are a priority for everyone involved in these Dialogue Tables. The proposed initiatives are just one example of the many vital projects our area desperately needs, and even though this is the first step of many towards our ultimate goal, we are already making considerable progress towards achieving true development and empowerment in JBS.” Holistic renovation projects proposed by the community will be implemented in selected streets in collaboration with local partners and stakeholders. The proposed projects will include sidewalk renovations, increased green spaces in urban areas, and installation of city bike rails. 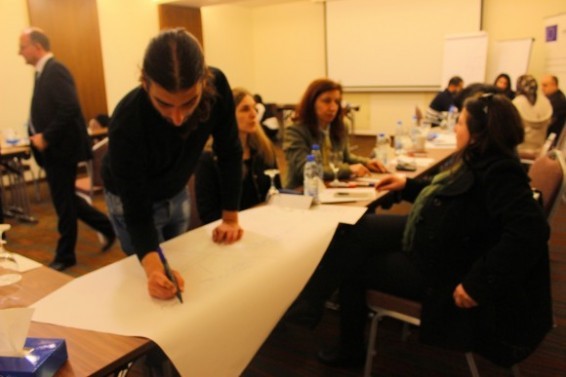 The above programme (“Promoting Inclusive Local Economic Empowerment and Development to Enhance Resilience and Social Stability”) is funded by the EU Regional Trust Fund in Response to the Syrian Crisis (MADAD Fund). Through this programme, the MADAD Fund and the LEADERS Consortium members work to support local initiatives for socio-economic development in Lebanon. The MADAD Fund was established in December 2014 to enable a more coherent and integrated EU response to the Syria crisis. It primarily addresses longer term resilience and early recovery needs (economic, educational, social and psycho-social) of Syrian refugees in neighbouring countries such as Jordan, Lebanon, Turkey and Iraq, and supports overstretched host communities and their administrations.

Update on ACTED’s Response to the Beirut Explosion 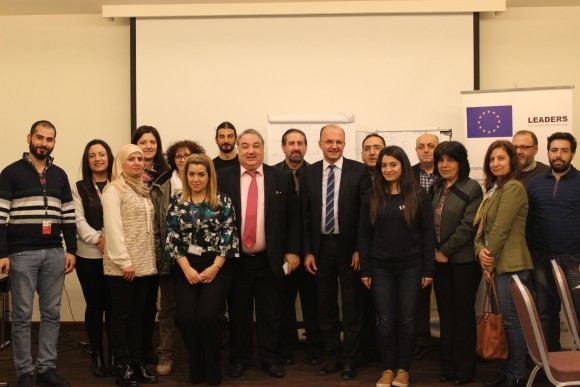 Only four kilometers away from bustling Beirut, the town of Bourj Hammoud has been suffering from serious water and air pollution problems as well as overpopulation aggravated by the recent refugee influx, with negative impacts on the economy of the town. Water treatment, electricity and waste management infrastructure have also been severely affected.

Basic services such as public lighting, traffic control, street cleaning and solid waste management are primarily coordinated directly by each municipality in the region. ACTED, in coordination with other local partners, is holding dialogue tables to bring together different stakeholders including representatives of the municipality, the private sector, local civil society actors as well as other relevant components actively engaged in their respective communities. The LEADERS Consortium (composed of ACTED, Danish Refugee Council, CARE, Oxfam, Save the Children and Makhzoumi Foundation), is contributing to the economic self-reliance, resilience and social stability of displacement-affected populations of Beirut and Mount Lebanon.

Through the holistic “Promoting inclusive local economic empowerment and development to enhance resilience and social stability” project funded by the EU Regional Trust Fund in response to the Syria Crisis – the MADAD Fund, the Consortium members work to support local initiatives for socio-economic development in Lebanon. The MADAD Fund was established in December 2014 to enable a more coherent and integrated EU response to the Syria crisis. It primarily addresses longer term resilience and early recovery needs (economic, educational, social and psycho-social) of Syrian refugees in neighbouring countries such as Jordan, Lebanon, Turkey and Iraq, and supports overstretched host communities and their administrations.

Keeping in mind that the issues Bourj Hammoud and other Lebanese areas face are affecting both Lebanese host communities as well as Syrian refugees, ACTED’s economic development and livelihoods team conducted an outreach session with syrian refugees residing in Bourj Hammoud in order to get their input on the issues the area is in dire need of handling.

Concerns were quite similar: reforestation, solid waste management, restoration of existing infrastructure and mitigation activities to reduce tensions and prejudice between both communities were brought up by both groups. Given the difficult circumstances at hand, both communities showed a willingness to meaningfully contribute throughout the discussion.

Strategic solutions to improve the health and economy of Bourj Hammoud

In Bourj Hammoud, proposals for projects designed through these group discussions focused mainly on basic service delivery improvements such as waste management, health services, and on economic development opportunities. In order to support community-led decision-making, ACTED’s team facilitated a voting session in which stakeholders decided on social and economic development priorities. In Bourj Hammoud, priorities focused mainly on both the health and economic sectors. The projects proposed centred around strategic solutions to improve health facilities in Bourj Hammoud including a public hospital, equipment for dispensaries in the area and various health prevention and awareness raising initiatives. In the economic sector, projects were designed to respond to the volatile security and economic situation, and focused on regulating foreign competition, promoting local produce and products, and establishing a local market for local artisans and vendors.

Through this consortium, ACTED will implement three community support projects in Mount Lebanon based on this community decision process with the aim of improving job creation and problem solving mechanisms for vulnerable communities in Lebanon. 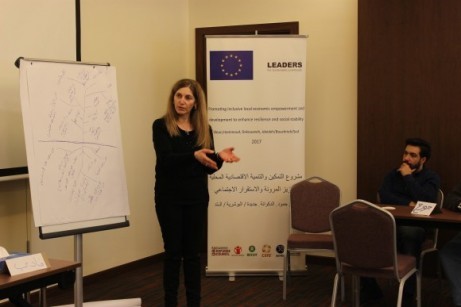 Securing access to basic hygiene products for Lebanon’s most vulnerable

Providing meaningful training and work opportunities for women in Lebanon