Since 2003, ACTED has been working in Iraq to provide humanitarian support to vulnerable populations through a multi-sectoral response to the Syrian refugee crisis and the Iraqi mass displacement challenges. ACTED teams in Iraq implement a comprehensive response ranging from emergency and camp management activities to reconstruction, stabilization, and resilience programmes across 15 governorates.

With the end of military operations against ISIL in 2018, Iraq was able to begin its transition into a post-conflict state. Many Iraqis began their journey back home, not knowing whether they had homes to return to, nor what remained of their communities. Iraqis face damaged infrastructure, a complex and hypersensitive community reconciliation process, and limited livelihoods opportunities, all of which will have to be addressed if the country is to move on meaningfully from its recent history.

Given these conditions, ACTED has gradually adapted its programming from emergency assistance to reconstruction, stabilization, and resilience, especially targeting areas of high return in order to help those affected by conflict rebuild their lives.

Iraq has seen a wave of approximately four million returns in 2018. Despite considerable recent investment in the recovery, for the two million Iraqi families still displaced, many barriers need to be addressed before they can return home. Unresolved concerns regarding the lack of security in their home region, the destruction of basic infrastructure, or a lack of prospects all serve to deter those displaced from reintegrating back into their communities.

To cater for the needs of those facing protracted displacement, in 2018 ACTED consolidated its status as a forefront actor in the coordination and management of camps housing displaced populations, as well as the accommodation of displaced persons living outside of camps. ACTED targeted the governorates of Ninewa, Diyala and Dohuk as the regions housing the highest concentrations of displaced persons nationally. ACTED’s work ensured that living standards were sustained and that families could access lifesaving assistance such as: emergency shelters, key supplies (e.g. cooking items and blankets), food, safe drinking water, and sanitation facilities.

In West Mosul, site of some of the heaviest fighting in 2017, ACTED created a number of ‘Quick Impact Projects’ to help rehabilitate vital infrastructure and reinstate municipal service. Such work is all the more vital given the high number of IDPs hoping to return to Mosul for whom a lack of basic services remains a key barrier. ACTED’s work included distribution of collective refuse bins, the repair and reinstatement of refuse collection trucks, street cleaning, and the rehabilitation of a water treatment facility. All actions were requested directly by Mosul residents, with ACTED giving setting priorities on the basis of community inputs. 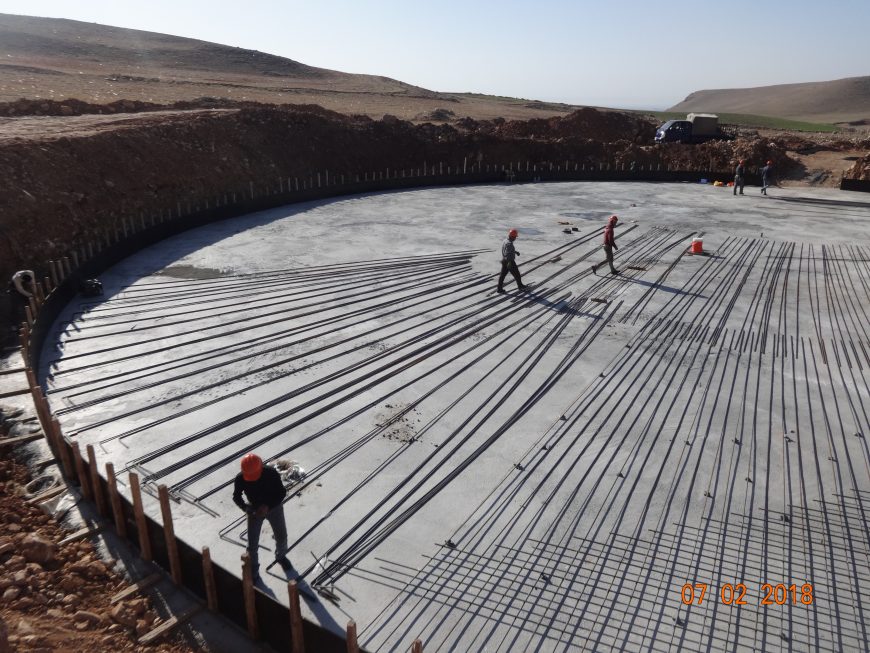 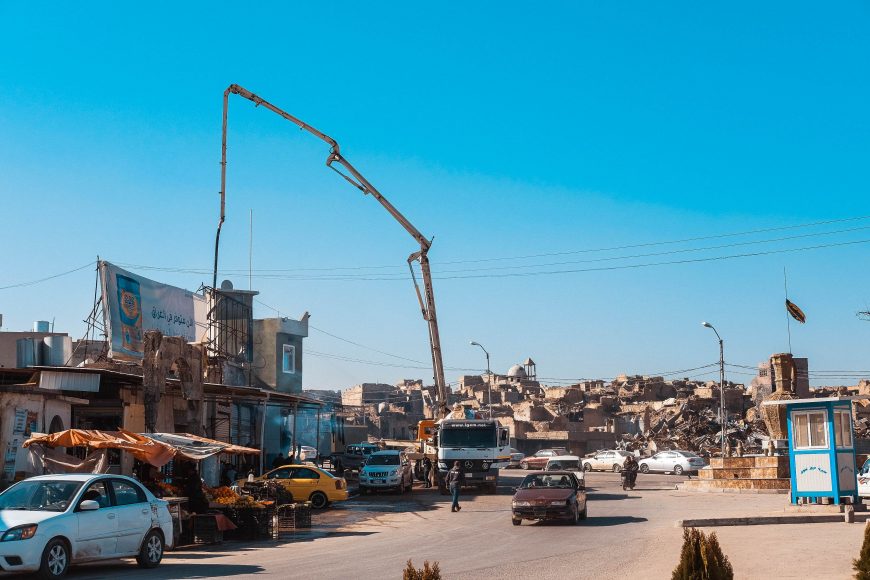 In Mosul, ACTED begins the cleanup operation following the retreat of ISIL. 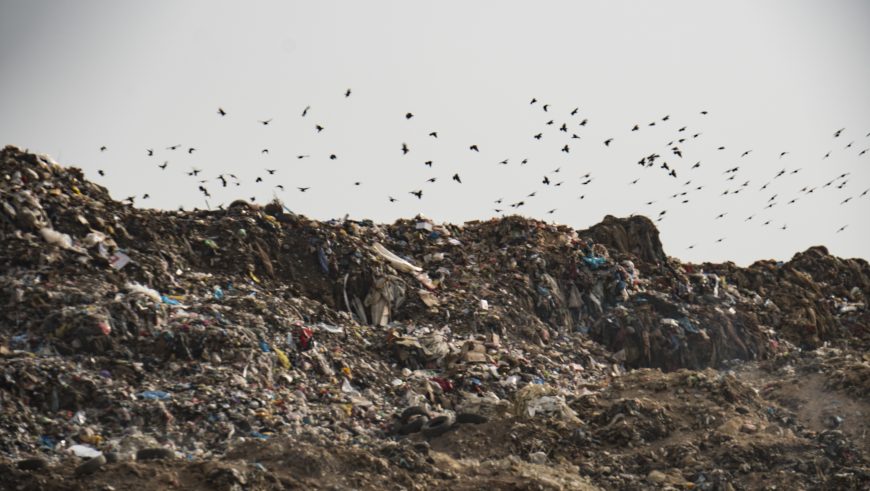 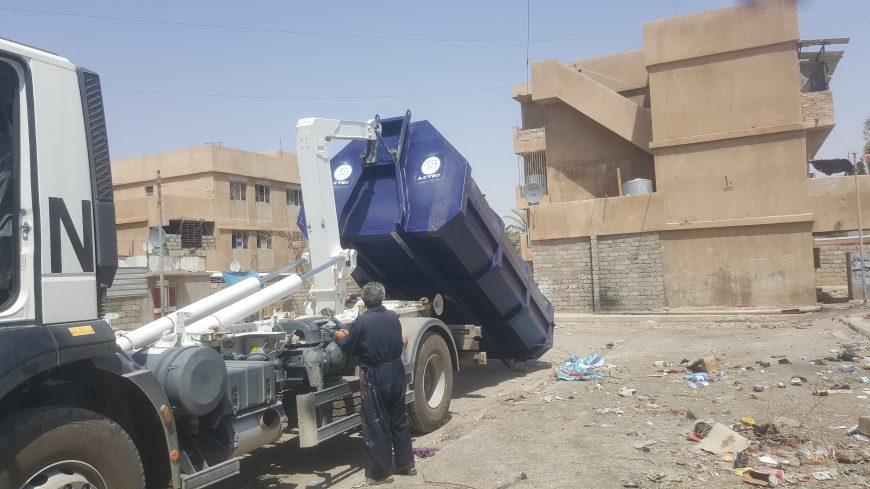 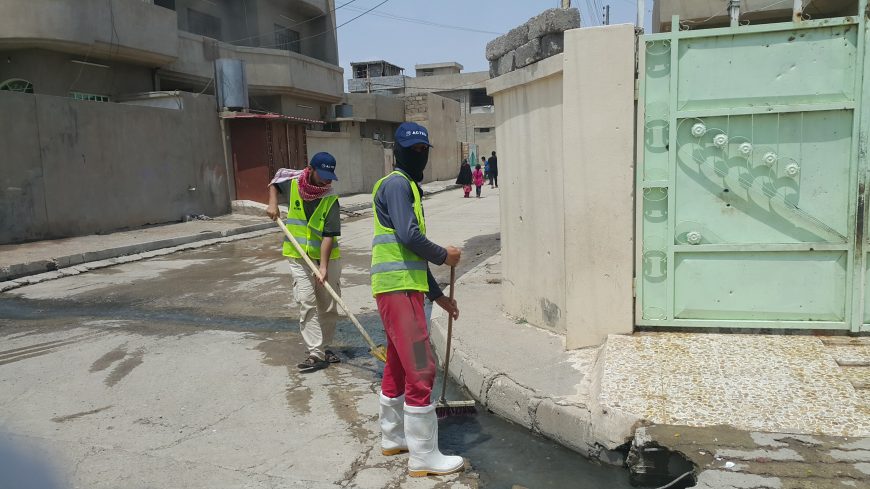 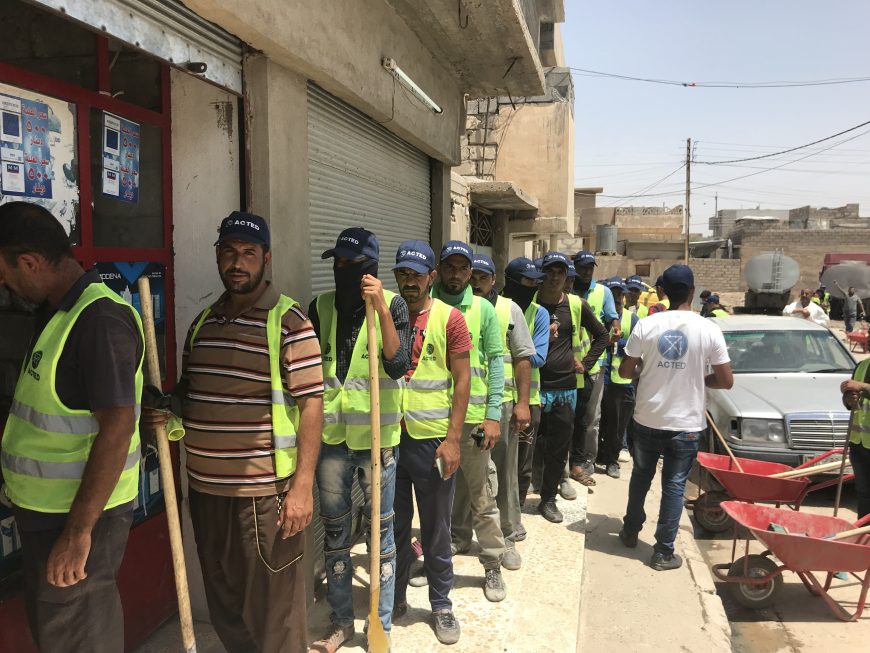 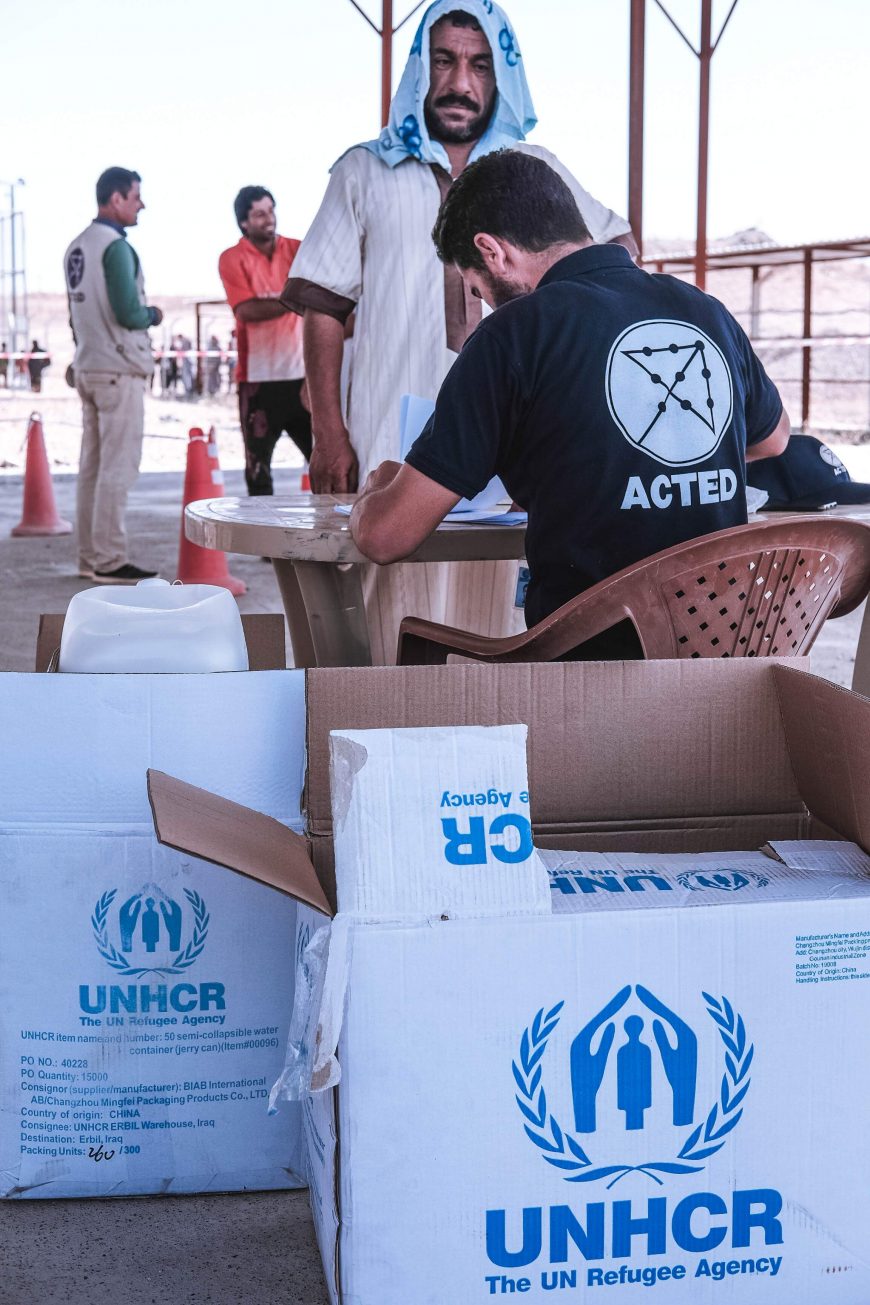 ACTED staff oversee a distribution of essential items at Salamiya camp. A camp in which many of those displaced from the Mosul conflict remain until this day. 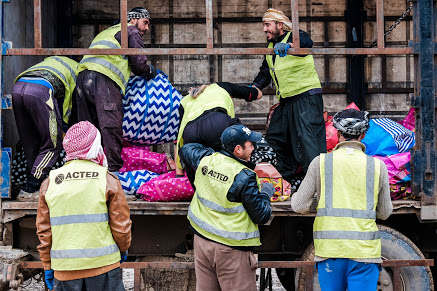 In Hawiga, locals lead the distribution of items to help displaced persons make their shelters resistant to the elements in preparation for the winter. 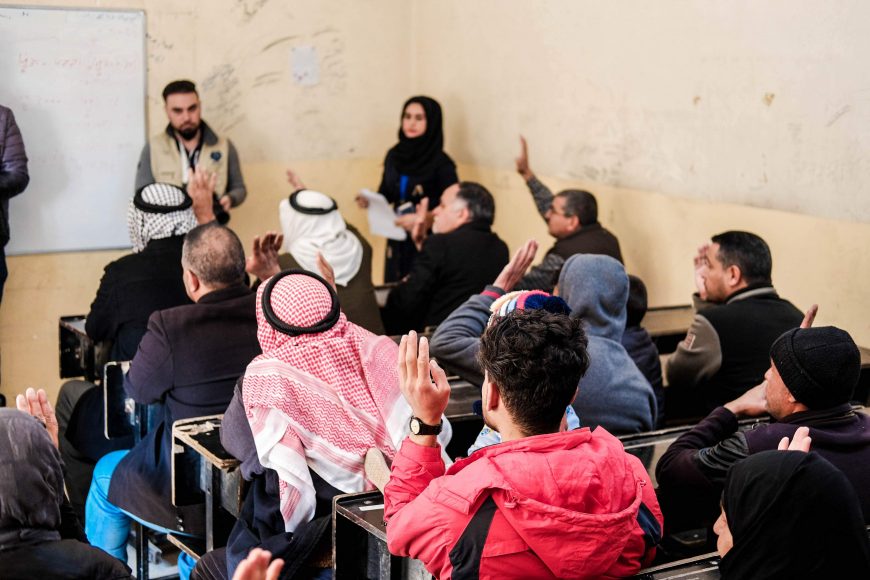 In Mosul, ACTED engaged with returning residents to help decide what the most pressing issues were in their neighbourhoods. 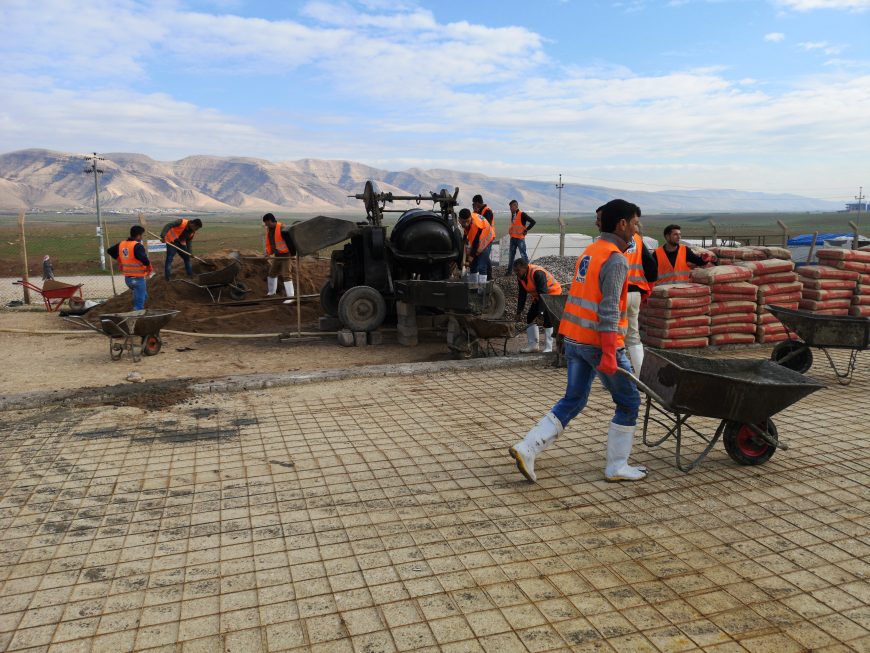 rrem
ACTED in Iraq remains heavily involved in the management and improvement of camps in Iraq and the KRI.

In Dohuk in the Kurdish Region of Iraq, the heavy influx of conflict-affected persons created serious environmental and health concerns due to the fact that solid waste management services were overwhelmed. ACTED worked to mitigate these impacts by investing in new water treatment infrastructures. To minimise the negative implications of toxic wastewater produced from the decomposition of landfill waste, ACTED piloted the construction of Iraq’s first leachate treatment system. This pioneering project helped position ACTED as a key player in the Water, Sanitation and Hygiene sector in Iraq, while providing a sustainable, locally-managed solution to one of Dohuk’s most pressing environmental issues. Now that the site is completed, local communities, livestock and groundwater are no longer at risk and local farmers have a new source of clean water for irrigation.

Emergency SNFI and CCCM response to vulnerable populations in Iraq

Child protection services for Syrian, non-Syrian refugees and asylum seekers from other nationalities in camps and out of camp locations, Duhok Governorate

Assessment and information management support to UNHCR: IDPs and refugees residing in and out of formal camps, Iraq

Assessment on the working conditions of women across key sectors (including IDPs, refugees and host community members)

Improving communication with the IDP communities in Iraq 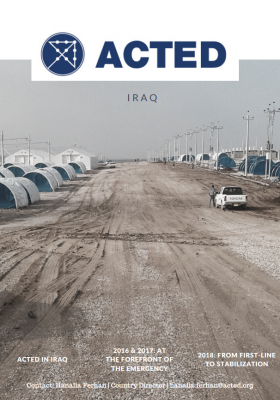 Building resilience in most affcted communities in Iraq 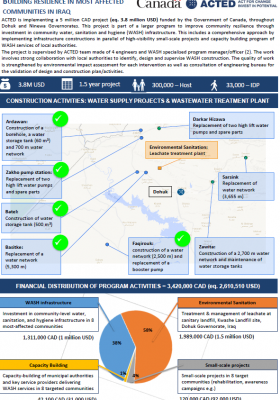 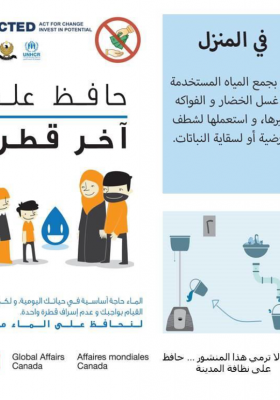