The military offensive to retake the city of Mosul, the last major remaining ISIL stronghold in Iraq, started on 17th October 2016 and, after 9 months, finally ended on 9th July. At the end of January 2017, after three months of fighting, East Mosul was retaken. However, the military operations to retake the western part of the city, which began on 19th February, turned out to be lengthier, due to the urban configuration of the area, which is densely populated and characterized by narrow streets filled with a high numbers of inhabited buildings. Even though the city of Mosul has been retaken, the humanitarian crisis is far from being over.

In the five months after the beginning of the operations in West Mosul, the number of men, women, boys and girls who have fled has reached unprecedented proportions. In June alone, the average number of people fleeing West Mosul on a daily basis has ranged between 2,000 and 5,000 individuals; picking to up to 10,000 individuals fleeing the city each day due to the proximity of the fighting, but also due to the exhaustion of stocks of food, water, medicines and other basic survival items.

Currently, 709,000 individuals remain displaced along the Mosul corridor. Nevertheless, given the volatile security situations and the ever changing context, it is difficult to accurately estimate the number of civilians remaining in West Mosul. While 224,000 civilians returned home as soon as their neighbourhood was retaken and the security conditions were perceived to enable a safe return, others never left the city, in particular those who remained trapped in their houses in West Mosul (in Hawsh al-Khan, Al-Imam Ibrahim neighborhoods and Al-Qadima ). For them, living conditions were dire, due to a shortage of food, water, and basic non-food items, and the inability to receive emergency assistance due to access problems. Additionally, these communities have been enduring a high level of psychological distress caused by the ongoing fighting. 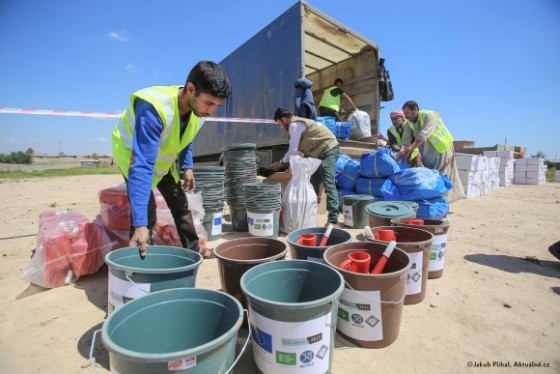 In order to address the needs of the most vulnerable, ACTED and People in Need (PIN), two members of the Alliance2015 network, have started the implementation of a project, funded by the European Commission’s Civil Protection and Humanitarian Aid department (ECHO), which will provide relief to 12,040 vulnerable internally displaced people (IDP), returnees and host community families currently in West Mosul or along the Mosul corridor. ACTED and PIN have a strong presence in country and extensive experience in humanitarian and development projects, including joint programming.

ACTED, PIN and Welthungerhilfe (WHH) as part of an Alliance2015 Consortium have recently finished the implementation of a project aimed at supporting vulnerable individuals in Mosul and newly retaken areas through the provision of non-food items, winterized items, emergency water trucking and WASH infrastructures. As a result of this project, 94,414 residents of two neighborhoods in East Mosul, Qahira and Tahrir, were ensured daily access to safe and clean drinking water. The partners also distributed 3,770 basic, hygiene and water storage kits and 1,322 baby kits to 3,734 households in East Mosul and Nimrud sub-district (Hamdaniya district). 128,081 liters of kerosene, together with jerry cans, were distributed to 397 household in newly retaken areas in Shikhan and Hamdaniya district. Heaters were also distributed to 1,264 households in eight different villages in Tilkaif, Hamdaniya and East Mosul. Lastly, 9,887 displaced people residing in Salamyah camp 1 benefitted from improved access to water in the camp thanks to the construction of a water distribution line and seven elevated tanks. This project had also an education in emergencies component: 2,450 children were reached with psychosocial support, including recreational activities, and schools were supported with scholastic materials.

In the aftermath of displacement, non-food items are crucial as most of the people fleeing leave all their possessions behind. Through this intervention, vulnerable households will receive basic non-food items kits, including summerization and winterization items, but also water storage, hygiene and baby kits. ACTED and PIN recognize the importance of providing an age and gender-appropriate response; in this regard, hygiene kits are instrumental to ensuring women’s dignity, while baby kits provide essential items for infants, which are often not prioritized by families in need due to the high cost and limited availability of these commodities in recovering markets.

The loss of a regular source of income and the consequent lack of cash is one of the main challenges for the hundreds of thousands of individuals who suffered through the conflict and in particular through the siege on the city. Living in a city under siege, with limited access to income-generating activities, most residents had to rely entirely on their savings. Due to the prolonged duration of the conflict, many have depleted their savings, which forced them to resort to negative coping mechanisms, such as borrowing money. This cycle of poverty and indebtedness causes a progressive inability to purchase essential commodities. This joint intervention will aim at addressing this pressing need with a one-off emergency cash transfer to vulnerable households. Market and household-level vulnerability assessments will allow ACTED and PIN to identify the most vulnerable families, together with the functioning markets in West Mosul, and to plan a cash intervention accordingly.

Recognizing the increased vulnerability of children in conflict and post-conflict scenarios, this intervention will also aim to address the social and emotional needs of children who have lived for a prolonged time under ISIL and who, in addition to having their educational pattern disrupted, found themselves living in an environment not appropriate for healthy growth. Through participation in a wide range of age-appropriate recreational and non-formal education activities in Child Friendly Spaces (CFS), Youth Friendly Spaces (YFS) and Temporary Learning Spaces (TLS), children and youth aged 5-17 will be able to restore some normalcy in their lives and slowly work towards overcoming the trauma they have endured. Furthermore, through a mobile approach, children in need will also receive Psychological First Aid and Case Management. Child and Youth Friendly Spaces will play an important role in helping identifying new cases of children with serious medical conditions, including physical and mental disability but also psychological distress. Once these cases are identified, they will be referred to case management workers, who will provide psychosocial support to children and their families and, where needed, will accompany them to the hospital to receive medical services.

Reasserting the role of civil society in Iraq