Since the retaking of Hawiga and Shirqat districts in northern Iraq from ISIL, ACTED has been a front-line responder in meeting the needs of the most vulnerable families, with funding from the European Union Civil Protection and Humanitarian Aid Operations (ECHO) and in collaboration with Alliance2015 partner People in Need (PIN).

In October 2017, an estimated 60,000 residents of Hawiga and Shirqat districts in northern Iraq returned to their homes. Forced to flee due to conflict, many of these families have spent three years living under ISIL occupation. More than 109,000 persons who have fled these areas still remained displaced at the end of November 2017, according to IOM. However it is expected that there will be further movements of return to these districts.

Families who lived in these areas throughout occupation were already vulnerable, having experienced difficult living conditions. As reported by the REACH Initiative, families who stayed in Hawiga district faced a lack of medical services, a scarcity of clean drinking water, and a crumbling school system (REACH, Hawiga District, Iraq – Rapid Humanitarian Overview, 17 September 2017). The prices of both food and household items were high due to inflation and items smuggled into the districts were of low quality.

The same REACH Initiative report found that to flee conflict, some families were smuggled to safety, paying for direction to safe routes or being provided transport by smugglers. As the cost of the journey was reportedly between 100-250 USD per person, it is a large expense for households without an access to income, further decreasing already diminished savings and their ability to purchase needed winter items. 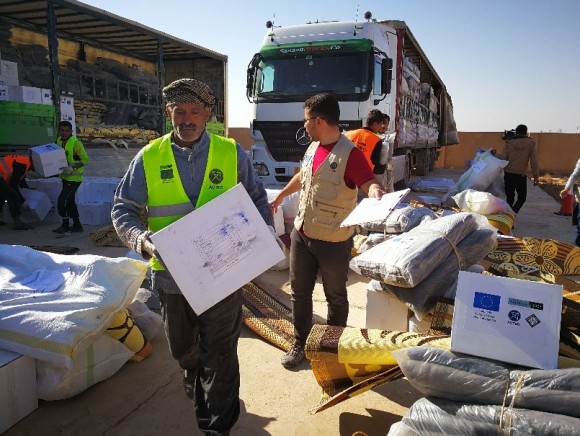 As families return to their homes in Hawiga and Shirqat districts, many have found their houses looted and damaged by the conflict, with possessions stolen, resulting in many living in unsuitable conditions through dropping temperatures. With many households without access to income and therefore without the means to purchase goods to keep themselves warm, it is essential for humanitarian actors to respond quickly.

An assessment of the needs of multiple villages in Hawiga district found that up to 70% of houses were looted, with no household items available. Further, families are required to travel to other towns to purchase goods, which requires fuel or cash for transportation, placing a further strain on household finances. In Shirqat district, PIN assessed multiple villages and found that many households in these villages were living in unfinished or abandoned housings, without adequate insulation for the winter months and the lack of means to purchase items to cover their basic needs.

In winter, temperatures in Iraq at night can drop as low as 2 degrees Celsius, with some nights falling below zero; families need a safe and warm place to sleep, in addition to a way to heat their home. For that reason, PIN and ACTED distributed items that are essential for winter, including mattresses and blankets to respond to some of the immediate needs of vulnerable families affected by conflict in the area and to allow them to live with dignity. In addition, as families have had their possessions destroyed or stolen and are without means to purchase more, many are lacking items essential to their health and hygiene. As such, ACTED and PIN also distributed hygiene, water storage and baby kits, containing items such as soap, diapers, and toothbrushes.

As critical needs arise, ACTED and PIN, as part of Alliance 2015, will continue to respond on the front-line of complex emergencies, seeking to reach the most vulnerable quickly and effectively.

Reinforcing communities after a conflict – Quick Impact Projects in Iraq