Today, March 15th 2017, marks the sixth year of the conflict in Syria.

This conflict has resulted in the largest humanitarian and refugee crisis of our time. The numbers are massive: almost 50% of the entire Syrian population are uprooted from their homes; five million have fled the country since 2011 and over six million are displaced inside trying to find ways to adapt and survive as the war enters its seventh year.

Alliance2015 is a strategic partnership of seven European development NGOs founded in 2000. Six partners, ACTED, Cesvi, Concern Worldwide, Hivos, People in Need and Welthungerhilfe have been providing support to Syrians, inside and outside the country, since 2012. Over the years, the partners have strived to grow, develop and improve their response to the crisis through collaboration, joint programming and information sharing. By working together, the Alliance2015 partners are able to share resources, local expertise and tools; minimising expenses and maximising impact. Our goal as an alliance is to ensure that we are able to provide effective assistance to the largest possible number of people. The Alliance2015 partners currently support over four million Syrians in Syria and its neighbouring countries.

Alliance2015 actions for IDPs and host communities in Syria

Given the large number of Syrians seeking refuge outside their home country, it is often forgotten that Syria hosts the largest displaced population in the world. A quarter of the Syrian population, more than six million people, are internally displaced. These figures, however, cannot tell the full story of the suffering caused by displacement. The figures cannot show the pain of a family’s struggle to flee from war, leaving behind life as they knew it and most of their belongings, to start all over again. For the majority of those who have lost their homes, their struggle to find new shelter is compounded not only by the insecurity, but by the need to feed, clothe and educate family members without a steady source of income or the support of a familiar local community.

In our combined efforts to relieve some of these burdens, Alliance2015 partners delivering humanitarian assistance inside Syria (Welthungerhilfe, PIN, ACTED and CONCERN), have focussed on providing emergency and resilience building assistance to displaced populations and their host communities. 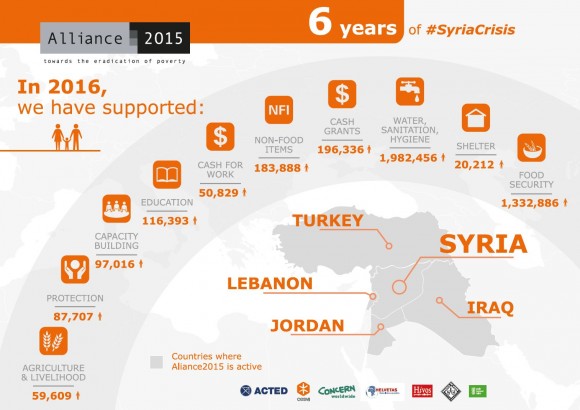 Inside Syria, our work covers many sectors, from providing one-off cash grants and shelter kits to newly displaced families, to rehabilitating water infrastructure in overpopulated villages.

In December 2016, international attention was drawn to the humanitarian crisis of east Aleppo city, which culminated in the evacuation of over 36,000 people into the countrysides of western Aleppo and Idleb. Using shared resources, Alliance2015 partners, People in Need and ACTED, quickly mobilised and effectively coordinated in order to conduct simultaneous distributions of ready-to-eat food kits, essential non-food items such as blankets, mattresses and diapers, as well as emergency cash grants. As thousands of families were displaced with virtually nothing save the clothes they were wearing, the need for basic items was immense. Suleiman was one such man evacuated from his home in east Aleppo with his family. He describes his loss and what it has been like starting over from scratch.

[In the evacuation] I moved with my wife and three children to the northern countryside of Idleb, where I am currently living in a home with four other families [..]. The town is overpopulated and prices are very high due to the large increase in number of people. Until now, I am jobless and have no source of income. Thanks to People in Need and ACTED, I received ready-to-eat food kits and a kit containing some non-food items. Today, I also received a very generous cash grant worth 120 USD, which will help me and my family in these very tough conditions. It is a terrible thing having to leave your home.

The pressure of displacement is felt not only by the uprooted families themselves but also by the communities that host them. These communities providing refuge to their fellow country men and women must share already stretched resources and endure market prices rising with short supply and large demand. Wadah Jamo, the head of the humanitarian office at a local council in Idleb, explains the challenges for host communities:

The high increase in the population has put many burdens and challenges on local councils, host communities and even humanitarian organisations. It has meant that local councils have try to adapt and find new resources especially with regard to providing sufficient drinking water and electricity. Humanitarian organisations play a vital role in reducing these burdens and alleviating the suffering of residents and displaced people alike.

Wadah Jamo, head of the humanitarian office in Idleb

Alliance2015 partner, Welthungerhilfe, is responding to this inside Syria by ensuring adequate access to safe water in areas hosting large numbers of displaced families. Ahmed Nizar, a resident from the village of Deir Hassan, explains the importance of such assistance for communities like his own:

Water is a basic need and we suffer from the scarcity of it. The only available source for water is buying it from private water tanks. The cost varies between 1200 and 2500 Syrian Pounds (about 5 to 11 Euros) per tank filling. On a monthly basis, large families need between four and five water tanks. Replacing, rehabilitating and expanding the water network will help improve our living conditions.

Ahmed Nizar, a resident from the village of Deir Hassan

As such, Welthungerhilfe has been supporting the rehabilitation of water networks and stations in Idleb governorate and will have rehabilitated several kilometres of water networks by the end of 2017. Welthungerhilfe’s assistance also includes capacity building and material support for local water councils, who are trained to provide and manage these water services in their communities.

Alliance2015 actions for refugees in the region

In Syria’s neighbouring countries, Alliance2015 partners support refugees by providing emergency support in the form of food aid and cash grants as well as improving access to essential services such as water, education, protection, and psycho-social support.

Neighbouring countries such as Lebanon and Turkey have taken in nearly four million Syrian refugees since the start of the conflict, whose needs change as the conflict persists. In Lebanon, Alliance2015 partner Cesvi initially focused on responding to the most urgent socio-economic needs of Syrian refugees and Lebanese host communities. Adapting to some longer-term needs, Cesvi is currently focusing on socio-economic inclusion of refugees and vulnerable host communities by supporting the development of vocational skills, capacity building and improved access to the labour market. Likewise, Concern Worldwide has been supporting refugees and host communities in both Lebanon and Turkey in the sectors of shelter, water, sanitation and hygiene, protection, livelihoods and education and is increasingly developing longer term interventions to ensure sustainability.

ACTED, Concern Worldwide, CESVI and HIVOS are collaboratively designing and implementing livelihoods and protection activities across Lebanon, drawing on their joint learning and experience to help ensure these essential activities reach the maximum number of Syrian refugees. This collaboration avoids duplication of effort and maximises efficiencies, by utilising and sharing the same systems and tools in different parts of the country. While Welthungerhilfe doesn’t have an operational presence in Lebanon, Concern Worldwide draws on their technical and management expertise to improve the quality of programming in north Lebanon.

With the passing of every year, the number of people affected by this conflict grows. Since the evacuation of east Aleppo in December 2016, we see that the focus of the international community has moved on from Syria, but now more than ever the people of Syria need our continued support. Today, as the conflict enters its seventh year, we call for the continued attention of the international community, that it furnishes the funds deemed necessary to meet the humanitarian needs (currently only 14% of the needs are met according to UNOCHA ) and an increase in international pressure for a solution to the conflict to be brought about by peaceful, political means. We must not let their plight be forgotten.

Securing access to basic hygiene products for Lebanon’s most vulnerable

Towards a new life: Celebrating refugees’ integration through language and skills training