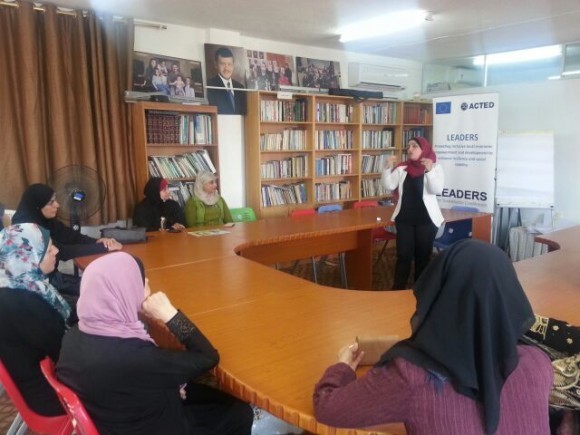 ACTED 2017
A lawyer from the community of Al Rusayfah, facilitates a discussion about the legal rights of women in Jordan

On July 19th 2017, Syrian and Jordanian women of all ages from the community of Al Rusayah came together in a roundtable discussion to discuss the challenges facing women in Jordan. This event was part of a series of community initiatives, led by ACTED in Al Rusayfah and Balama’a municipalities as part of the EU-funded LEADERS project.

On July 19th 2017, Syrian and Jordanian women of all ages from the community of Al Rusayah came together in a roundtable discussion to discuss the challenges facing women in Jordan. This event was part of a series of community initiatives, led by ACTED in Al Rusayfah and Balama’a municipalities as part of the EU-funded LEADERS project.

The date of the event was fully intentional, as it came immediately following the passage of a controversial law in Jordan on early marriage. The new law, while attempting to further restrict marriage of young girls between the ages of 15-18, came still laden with loop-holes and instead allowed individual cases to be decided on a case by case basis by a judge. The controversial nature of the new national law left many women in Al Rusayfah lacking trust in a judge’s ability to protect their interests and feeling unsure of their legal rights as women in marriage and divorce laws.

This event was facilitated by lawyer Ms. Rana Hasanien, who lives in the same community of Al Rusayfah. The open discussion gave the attendees the opportunity to learn more about the legal implications of Jordanian marriage and divorce laws, ask questions to fully understand their rights as women, and share their opinions and experiences in a safe space.

One woman, Mona, spoke highly of the workshop and stated that “this event was so important for me and for all of us. We were able to better understand out legal situation and we also benefitted greatly from hearing one another’s experiences, so that if one of us in the group had faced a big challenge with the courts or in a marriage or divorce case, we were able to learn from her experience so the same would not happen to us.”

“The topic of this event is one that touches the heart of all women in society,” said another attendee, Ola, “I was also very happy that the facilitator Ms. Rana was from our community. She was really able to understand our challenges and needs as women in Al Rusayfah.”

Because of this event’s success, ACTED alongside the community members of Al Rusayfah, is planning to conduct a similar even in other areas across the municipality to ensure as many women as possible have the opportunity to attend.

Minimizing the spread in Jordan’s Camps