Learning in practice: An innovative new approach to capacity-building and advocacy 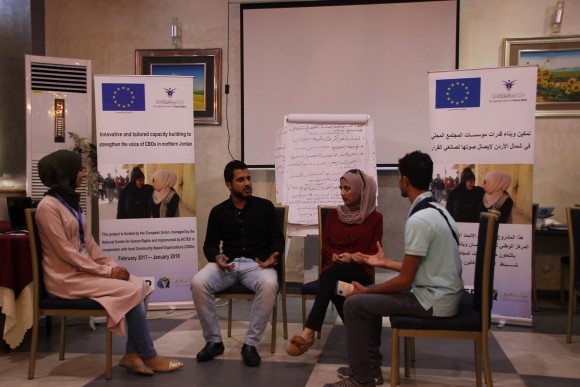 ACTED 2017
Advocacy for women’s rights, rights of people living with disabilities, and in particular, youth engagement, were popular choices among CBOs for their project designs

For the first time, ACTED is empowering small community-based organisations (CBOs) in northern Jordan not only through conducting trainings and coaching sessions, but by guiding them through a full project cycle, from the proposal design stage and budget, to full implementation of advocacy initiatives.

ACTED has been working with CBOs in Jordan since it first began working in communities hosting Syrian refugees in 2012. ACTED knows CBOs are paramount to a project’s success in – they are integrated into the local communities, knowledgeable about the community’s needs and dedicated to their work. Because CBOs’ knowledge of rural communities in Jordan has become such an important resource for ACTED programming, ACTED has always provided CBOs with capacity-building through group training sessions and experience-sharing sessions, and one-on-one coaching on the CBO premises.

But over the years that ACTED has been conducting these sessions, an unexpected challenge became more and more apparent: CBOs gain a lot from training and coaching sessions on organisational and financial management, but without the funding to actually implement projects themselves, it was impossible for CBOs to truly practice these skills. “It has always been a bit hard for us,” says one CBO director, “We learned so much from the training sessions on financial management, but we do not have large enough projects that actually require us to manage large sums of money. It was hard to get the practice and we felt stuck.”

That’s why, for the first time ever, and made possible through EU funding under an initiative “EU Support to Civil Society in Jordan,” and managed by National Centre for Human Rights, ACTED is implementing a new approach: four CBOs across northern Jordan will be given the opportunity to design a project, draft a project proposal and a full budget, receive financial support from ACTED and lead the implementation of the project.

“This is the first time I have ever received any practical guidance in how to write a grant,” says Dinah, Director of Sama Al Badiya CBO in Mafraq governorate.

This project is unique among all the other projects we have with other NGOs. A lot of other INGOs like ACTED give us trainings, but this is the first time we’ve actually been able to practice the skills from those trainings.

Rahaf, a volunteer who has been working with Aidoun CBO for the past 2 years

‘Advocacy’ was chosen in collaboration with the CBOs as a guiding theme for the project proposals, but each CBO was given the flexibility to design an advocacy initiative of their own choosing.

Advocacy for women’s rights, rights of people living with disabilities, and in particular, youth engagement, were popular choices among CBOs, who chose a focus to their advocacy work that they believed would have the greatest impact on their communities. Osama, ACTED’s Advocacy Officer, speaks passionately about the amount of promise he sees in the evolving advocacy initiatives being led by the CBOs. “Every day, when I see the amount of enthusiasm and energy youth in these CBOs possess, I realize how much their voices could have a tremendous impact on the future if we engaged them with our advocacy work,” says Osama. “I believe advocacy is the key to a successful tomorrow.”

Women tailoring their future in the sewing factory

Getting the taps running again in Jordan

Back to school with stickers and soap