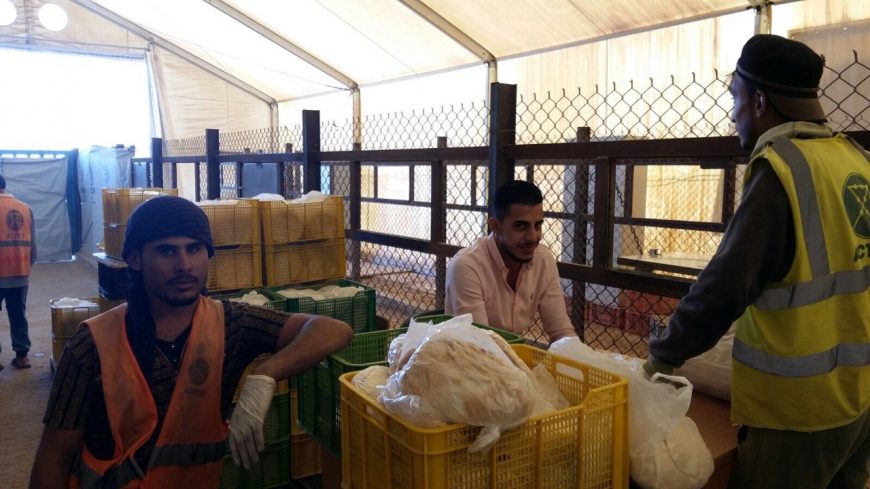 ©ACTED
ACTED IBVs are distributing bread to the Syrian refugees in the WFP distribution site.

Today, October 16, ACTED joins the international community to celebrate World Food Day, one of the most celebrated days in the United Nations calendar, which focuses for this 2017 edition on “Change the future of migration. Invest in food security and rural development”.
Here a glimpse of ACTED Jordan’s activities in Azraq refugee camp, where ACTED has been distributing bread, dry foods, dates, and vouchers to Syrian refugees every morning since 2014, in partnership with the World Food Programme (WFP).

ACTED has been working in strong partnership with WFP since 2014 on food security issues and has progressed on the way to Zero Hunger by providing daily bread and dry food distributions in Azraq camp. According to UNHCR, Azraq camp nowadays hosts over 34,000 refugees (as of September 2017).

After their arrival in Azraq camp, refugees receive vouchers, including coupons equivalent to 10 Jordanian Dinars and new vouchers for bread valid for 15 days. In 2017 alone, ACTED distributed more than 2 million kilos of bread to refugees in Azraq camp. Over the years ACTED has partnered with a wide range of local NGOs including the Jordanian Hashemite Charity Organisation, in addition to local bakeries like Anwar Al Madenah and Luminus Bakery.

Hammam is a Food Security team leader and has been working at the bread distribution site for four years with ACTED. “I interact with people every day. I share experiences with the refugees and I make friends.” For him, World Food Day means that we take into account the needs of each other. “A special event like this one makes us think about those who do not have what we have,” he adds.

Aisha is an ACTED Incentive-Based Volunteer. She has been working in Azraq camp for three years but this is her second day at the bread distribution site, where she is in charge of the women and children’s line. “I am happy to distribute food for our kids and for all. This makes life easier for refugees.”

Organized every October 16th, World Food Day marks also the founding in 1945 of the Food and Agriculture Organization, one of the United Nations agencies. This event, celebrated in over 150 countries, promotes worldwide awareness and action for those who suffer from food insecurity and hunger, and recalls the need to ensure sustainable food security and nutrition for all, while recalling commitment to reaching and implementing the Sustainable Development Goals (SDG) and celebrating the progress towards reaching a Zero Hunger world.

Every year, World Food Day theme changes in order to highlight needs for action and provide a common focus. This year’s World Food Day focuses on “Change the future of migration. Invest in food security and rural development”.

Out of the 129 countries monitored by FAO, 72 have already achieved the target of halving the proportion of people who suffer from hunger. ACTED remains committed to reaching Zero Hunger, in Jordan and in all its countries of intervention worldwide.

Minimizing the spread in Jordan’s Camps

Syrian children take the lead for a safe sanitation environment in Zaatari!