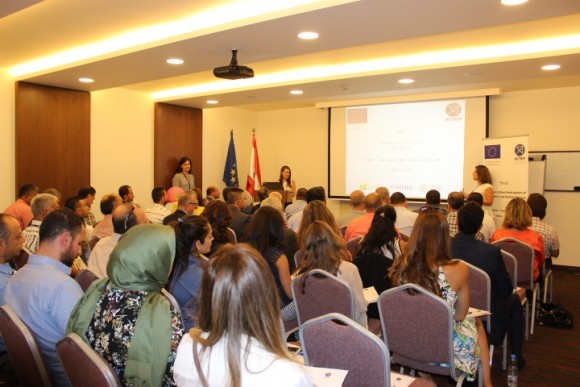 ACTED 2017
Participants during the Introductory Workshop for the new TA’CIR project, organized in Beirut, Lebanon

ACTED has been registered in Lebanon since 2006 and has an established country office in Beirut as well as a field office in Akkar. More recently, ACTED has launched activities in the South and in Tripoli, and provides comprehensive support tailored to the geographic contexts and spatial dimensions.

Towards an Active Participation of Civil Society in the Reform Process

Under the European Union funded “Towards an Active Participation of Civil Society in the Reform Process” (TA’CIR) project, ACTED organized a workshop on July 20, 2017 at Citea Hotel in Beirut. The workshop was attended by representative of the European Union Delegation to Lebanon Ms. Roula Abbas with the participation of municipalities of the fifty areas of implementation in the districts of Akkar, Tripoli, Maten, Baabda, Saida, Sour and Nabatiyeh.

During the workshop, ACTED presented the objectives of the project, which is essentially the enhancement of the capacities of local authorities to develop, implement and monitor local action plans, which will be drafted based on the actual needs of local communities. In the course of the project, civil society organisations, cooperatives, labour unions, associations and community groups will network with municipalities in order to enhance inclusive local development planning to best address the basic needs of marginalized groups in rural areas of the country.

This project, implemented in partnership with Akkarouna, Lebanon Support and SHEILD, aims to contribute to a more enabling environment for civil society in Lebanon, fostering the engagement of civil society organisations both at policy and local development levels through the implementation of the “EU Roadmap for Engagement with Civil Society in Lebanon”. The project will also strive towards developing the capacities of civil Society organisations and local authorities for inclusive planning in order to address basic needs of marginalized groups in rural areas of the country.

“Municipalities are essential stakeholders for ACTED, as they are the front line in crisis response in Lebanon. For the next three years, ACTED and partners will be working closely with municipalities, civil society organisations and the local community with the aim of strengthening cooperation between local authorities and civil society in leading local development initiatives in Lebanon.” Ms. Hart Ford, ACTED Country Director

During the ceremony, Head of Bourj Rahal Municipality in South Lebanon, Mr. Hussein Hammoud, thanked the EU, ACTED, and partners, for their interventions in their area. Mr. Hammoud added, saying that “it is with the help of NGOs like ACTED that several municipalities across Lebanon are now able to successfully implement numerous projects and initiatives that were once deemed impossible”. Mr. Hammoud also hoped that this cooperation will “help solve the many issues faced by municipalities such as the absence of decentralization and excessive bureaucratic obstacles”.

Update on ACTED’s Response to the Beirut Explosion