For the first time in a long time, global hunger is on the rise 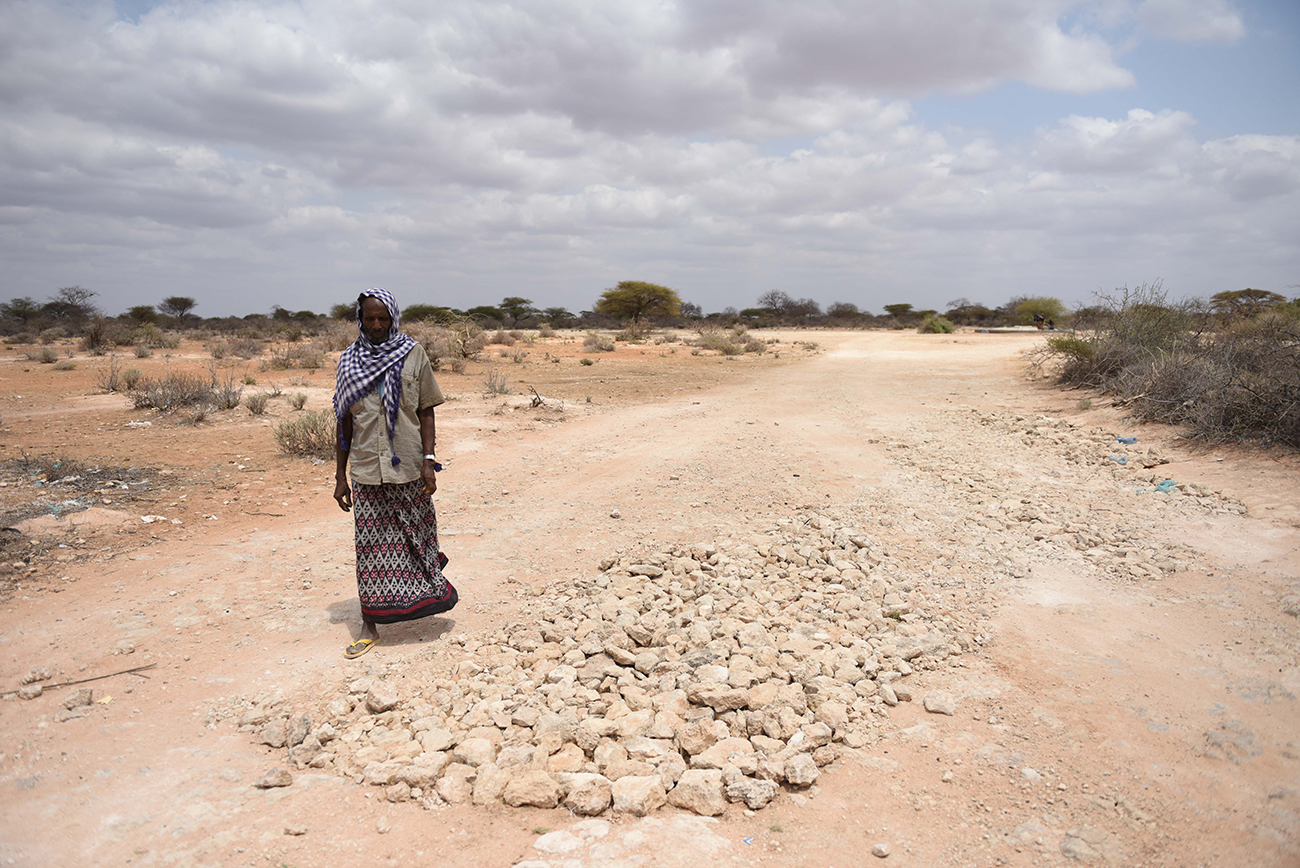 © Ilyas Ahmed for ACTED Somalia, July 2017
A man walking on a feeder road rehabilitated by ACTED through cash for work. This programme supports people displaced by drought living in Qoryooley camp, in Elwak district, Somalia.

The issue of hunger has aroused great interest among the international community when famine was declared in South Sudan last February. Since then, the United Nations has declared the famine situation officially over. However, the root causes of hunger, and therefore of potential famine situations, are still there. The number of food insecure people is increasing. According to the last WFP report on the State of Food Security and Nutrition in the World, the number of undernourished people on the planet has increased to 815 million in 2016, up from 777 million in 2015. East Africa and Yemen are among the most affected areas. Increasingly complex and protracted conflicts and the adverse effects of climate change are among the main causes of hunger.

There is a strong correlation between conflict and food crisis. In the face of collapsing systems and services, steadily worsening insecurity, lack of access to water, population displacements, access, supply and administrative constraints, food crisis is often an inescapable outcome of conflicts. The food security situation has deteriorated mainly in conflict-affected areas, often exacerbated by extreme meteorological events.
In South Sudan, the protracted conflict raging since 2013 has plunged the country into a serious food and health crisis with the proliferation of cholera. Over 1.8 million people are now internally displaced. A large part of the population of South Sudan relies on agriculture for their livelihoods. Farmers leave their land to flee violence. Land in Greater Equatoria was progressively abandoned as the conflict reached the region. Greater Equatoria used to be the breadbasket of South Sudan. With 6,072,000 food insecure people, “South Sudan is facing the worst food insecurity situation in its history” said Michael Mangano, ACTED country director. The fighting in the country has precipitated the food insecurity within the country because of the lack of people able to grow crops, a loss of livelihoods, market failings, the economic situation which has reduced people’s purchasing power and access to agricultural inputs and a lack of access to services.

In some countries, conflict and hunger are the main causes of population displacements. Displaced populations are particularly vulnerable – some of them have already been displaced more than once. They often resort to negative coping mechanisms like having only one meal a day, eating less nutritional food or selling goods. The number of refugees and displaced persons at the global level reaches 64 million people. Children are often the first victims: nearly 122 million stunted children under five years of age are living in countries affected by conflicts.

According to the authors of the FAO report, “the concomitance of conflicts and natural disasters of climatic origin could be more frequent under the effect of climate change, because it not only aggravates problems related to insecurity but can also lead inexorably to conflicts”.

Droughts are recurring events in the Horn of Africa and the Sahelian Belt – but after three years of persistent drought, aggravated by climate change, the food security situation dramatically worsened. Somalia is affected by particularly intense climatic shocks exacerbated by the El Niño phenomenon, and nearly half of the population is currently food insecure (6.2 million people). In 2010-2011, the famine in Somalia killed close to 260,000 people. While famine could be averted in 2017 through emergency humanitarian interventions, the situation remains catastrophic, while drought continues and the forecasts regarding the seasonal rains remain negative.

Herds have been decimated by repeated droughts and their effects, thus jeopardizing livelihoods, and forcing populations, mostly living from agro-pastoral activities, to move in search of water and food. This results in conflicts over resources, and puts additional pressure on already limited services that can’t cope with the massive arrival of displaced people around urban centers, while droughts continue to spread and families who lost almost everything struggle to survive.

945,000 children under the age of five are suffering from acute malnutrition in Somalia, 185,000 of which from severe acute malnutrition. More than half of the country’s population needs food assistance. Deaths directly related to drought continue to be reported. Water-related diseases such as acute watery diarrhea or cholera are becoming more widespread and continue to increase, due to the lack of water, poor hygiene and sanitation conditions, but also global warming, which fosters the proliferation of bacteria in the environment. Diseases increase, and contribute to increase the risk of malnutrition.

Malnutrition and diseases are very much interrelated – malnutrition facilitates the proliferation of diseases and vice versa. Malnutrition and diseases weaken the immune system, particularly of children, who are thus more likely to die from diseases or dehydration, especially since access to water is greatly compromised. Children are the first victims of water-borne diseases. Their bodies are deprived of the nutritional elements necessary for their growth. This can easily lead to malnutrition, which in turn leads to greater vulnerability to diseases. Weakened and malnourished bodies are more likely to be infected by deadly bacteria like cholera.

Cholera is re-emerging and proliferating in many conflict areas as a result of deteriorating health and humanitarian conditions. Populations of countries like South Sudan, the Democratic Republic of the Congo and Yemen have been plunged into a deep food and health crisis. Yemen is currently experiencing the worst cholera epidemic in the world, with 686,783 suspected cases on past 17th September. In the face of conflict, poverty and cholera, the country is now on the brink of famine with 17 million people affected by food insecurity.

Cholera broke out in Yemen in October 2016 and massively spread throughout the country in April 2017, with the start of the rainy season, due to the lack of doctors and functional health facilities in the country. Hunger only aggravates the situation: an estimated 1.7 million children suffer from malnutrition according to the United Nations. “A malnourished child has no chance against cholera,” says Liny Suharlim, ACTED country director in Yemen. “Many people die because they are not able to reach the nearest health center.”

Food and medicine supply is severely compromised by fighting and bureaucratic constraints. “10,000 people died because they could not leave the country to receive the medical care they needed,” Liny Suharlim says. The situation is likely to worsen, with famine threatening the country – over one million people, as the bloody conflict continues to rage, after already two and a half year of suffering.

Humanitarian mobilization is essential to counter an even more dramatic evolution of the food and health crises that are affecting more and more people in the world. ACTED remains committed to addressing food insecurity and the spread of serious diseases and epidemics and to facilitate access to clean water. Beyond emergency operations, one of the priorities of ACTED’s field teams is to foster the construction of people’s resilience to shocks. Whether they are of human or climatic origin, building resilience to shocks is a critical step to cope with future shocks and reduce vulnerabilities, in the face of increasingly complex, multi-dimensional, and multifaceted crises in today’s world.

ACTED mobilizes in response to the Covid-19 pandemic

Nigeria: ACTED and the REACH team condemn the assassination of their team member and four other humanitarian workers and captives

ACTED mobilised on the food crisis in Africa