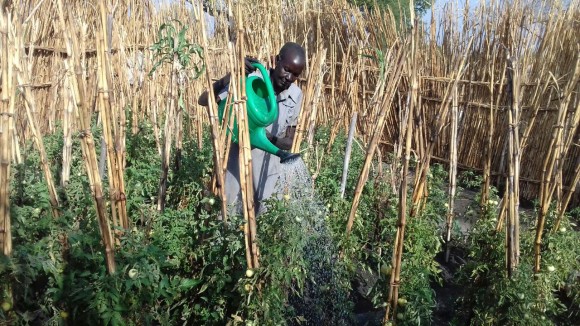 How do you describe the current situation you face in the country ? What kind of actions are you doing ?

The country is experiencing the worst levels of food insecurity in its history with alarming rates of people forecasted to be in IPC 3 – Crisis (4,345,000), IPC 4-Emergency (1,685,000) and IPC 5-Famine/Catastrophe (45,000). This means that it is forecasted in June and July, that the number of people suffering from extreme hunger will be over six million (50% of the population) which when you look at the figures when the IPC was first launched in January 2017 which was 4.9 million the situation has worsened significantly. Furthermore, the situation is expected to worsen as those that are most vulnerable and impacted are those that are displaced (accounting for approximately 2 million people). ACTED is currently implementing food security programmes in Jonglei, Central Equatoria, Lakes, Warrap and Western Bahr el Ghazal states where we are managing food, cash and WASH (Water Sanitation and Hygiene) kit distribution programmes to meet people’s immediate needs but in parallel we are implementing long term livelihood and agricultural programmes to improve farming practices, build resilience to enable people to respond better to climatic and political situations and livelihood creation to diversify income and create further options.

United Nations claimed last week that starvation is officially over in South Sudan (if we refer to the definition of starvation for the UN of course). What are the consequences for non-governmental organizations like yours ?

The Integrated Phase Classification for food insecurity is a standardization to classify the severity and magnitude of food insecurity. Please see attached document for June IPC for Key messages. The updated IPC report shows that the areas of South Sudan where famine was declared in February have seen improvements; however this does not mean that food insecurity is over. As mentioned above more people are now impacted by food insecurity and with the main 2017 planting season expected to result in low yields due to low farming due to displacement the impacts  will continue to be felt into 2018. The supply of food will become scarcer and we will see more negative coping strategies such as reducing to one meal a day, eating less nutritious meals and selling assets. Non-Governmental Organizations will need to continue to work to provide longer term solutions for the country whilst meeting immediate lifesaving needs and the scale of the support needs to expand considerably.

What do NGOs need in priority to help people in South Sudan ?

Despite the improvements in the counties that were declared as being in IPC 5 – Catastrophe/Famine phase it is critical that humanitarian aid assistance does not end. The situation in states bordering Unity state where famine as was declared have generally worsened illustrating the critical need for support to be targeted at IPC 3 and IPC 4 locations so to prevent the situation worsening and the numbers impacted worsening. Immediate life-saving needs like food, health care and water and sanitation need to be met in parallel to longer term solutions like livelihood creation, seeds and tools and agricultural training which will help people to improve their situation and make them more resilient to food insecurity.