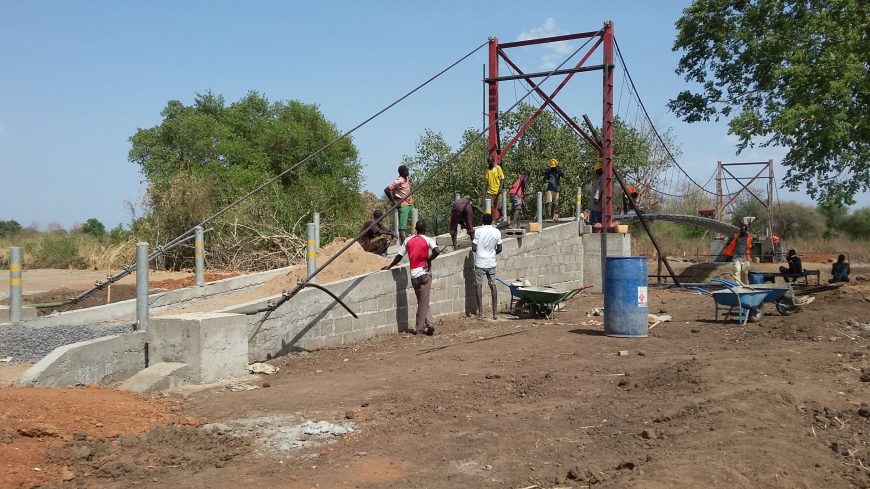 ACTED 2017
A bridge over the Yabus River in Maban County built with ACTED's support. The bridges enable local communities to access fertile lands, in a country where a high percentage of the rural population relies on agriculture for their own food consumption and livelihoods.

In Maban County, in the North of South Sudan, bridges are key assets in accessing social amenities for food insecure populations. In collaboration with KfW, ACTED has carried out the construction of three bridges in Bunj, Gismala, and Leika villages of Maban County. This focus on bridge construction, supported by KfW funding, is part of an integrated approach to reinforce food security, livelihoods and improve the living environment of displaced and host populations in Maban County.

Before the construction of these bridges, one of the most dangerous ways utilised by the communities in an effort to cross the river included women ferrying older people and children across the river in baskets, thereby risking their lives. The new bridges facilitate access to previously inaccessible and fertile arable land which is an important livelihood source for the host communities, while ensuring people’s easy access to basic services and social facilities such as schools, hospitals and to local markets for instance to vend in Bunj market.

The issue of improving access in a striking food insecurity context

South Sudan is currently affected by a harsh food crisis. While famine was declared in Unity State on 20th February 2017, the rest of the country is struggling to cope with the deteriorating food insecurity situation. The South Sudan National Multi-Hazard Early Warning Bulletin released in April 2017 warned of a serious food security and nutrition crisis, with about 4.9 million people facing food insecurity. In the meanwhile, hyperinflation continues to be a major challenge, with an annual food inflation rate of 480 percent in February 2017. 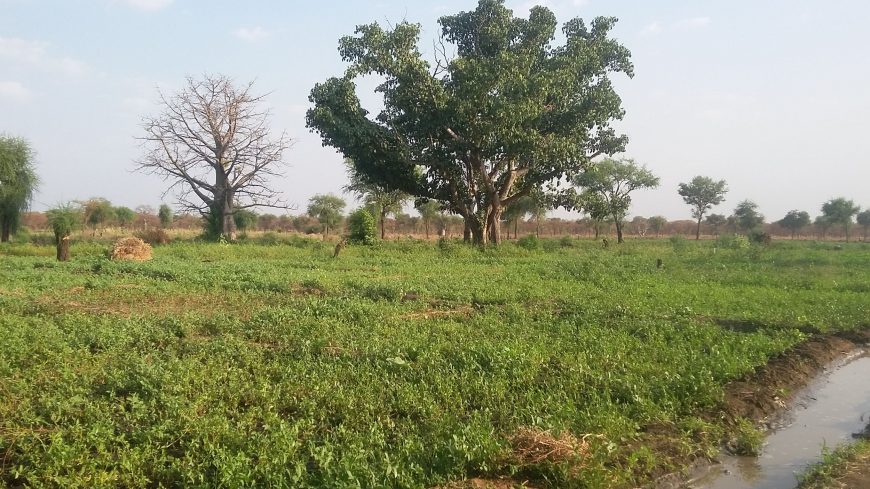 ACTED teams are currently intervening in Maban County, North-East of the country. Maban county continues to suffer high levels of food insecurity despite Maban being endowed with natural resources such as fertile land and the Yabus River, which could be harnessed during the dry season through irrigation to better support agriculture where typically planting is more difficult. In the recent Integrated Food Security Phase Classification (IPC) in January 2017, Maban County was classified as being in the ‘Phase 2: Stressed’ classification, and will move into ‘Phase 3: Crisis’ classification by July 2017.

Most of the fertile land lies across the Yabus River, curtailing physical access by farmers to land, where a high percentage of the rural population relies on farming activities for their own food consumption and livelihoods. Furthermore, most of this land has remained uncultivated during the rainy season as a result of flooding which makes crossing the river to cultivate impossible.

Maban County is also a temporary home to many Sudanese refugees who have fled conflicts in their ancestral homes in the Blue Nile state, and started to integrate with the local host communities in Maban, thus adding further pressure on an already difficult situation.

Opening up new opportunities for communities through bridge construction

In Maban County, ACTED has been providing life-saving assistance to South-Sudanese communities and Sudanese refugees, in parallel to resilience and development projects such as bridge construction in host communities and improving agricultural farming practices. Bridges are key assets in accessing social amenities in Maban County and the three bridges have been handed over to the community.

Leika Bridge was completed recently: with a span of 36 meters across the walkway, allowing people and donkey carts to easily cross to the other side. All suspension bridges are designed to absorb substantial tonnes of weight with minimal maintenance.

Awad, a senior leader for the Maban North and Maban East counties quite explicitly highlights that the community will benefit a lot from the bridge constructed in Leika village. These communities have been cut off from access to social facilities for years. The bridges open the community up to hospitals, schools, markets and arable lands, and connect communities, thus encouraging trade activities. Awad’s wife, Elizabeth, lost six goats to flood waters as they tried to cross the river. “We will stop losing our children and goats to flood waters when the river floods,” she adds.

Bridges will not only improve access to key facilities, but will also reduce risks associated with gendered roles and responsibilities at the household level. Elizabeth, a mother of seven children is happy that though five of her older children are too old for school, two of them will be joining a school in the coming month as she is now confident of their safety whilst crossing the river. 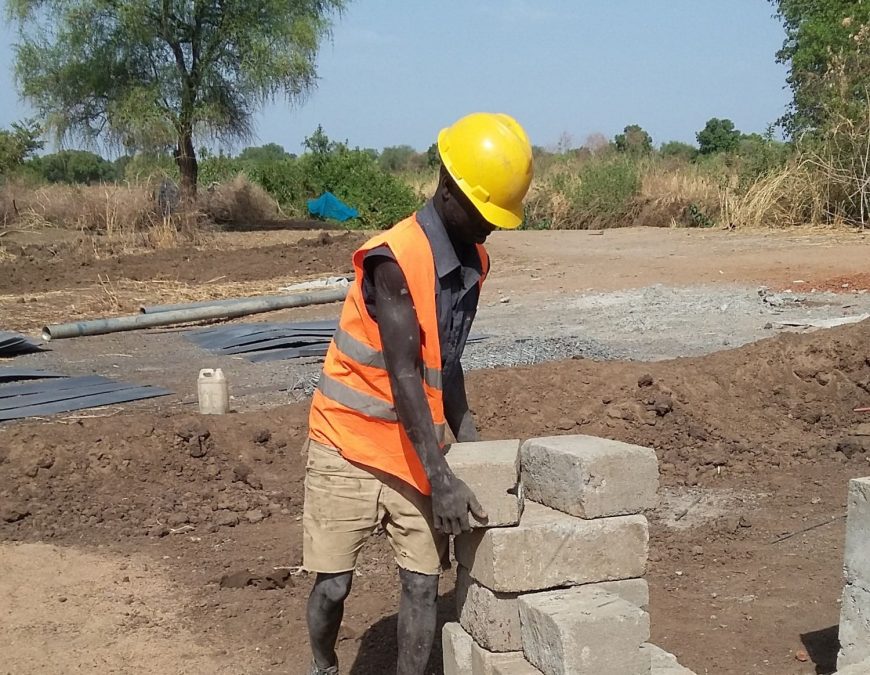 ACTED 2017
Work during the construction of a bridge over the Yabus River.

During a site monitoring visit, an ACTED Programme Officer met Liu, a 25-year old husband and father from Dangapi village in Maban South West County. He used to be a farmer, watching his crops fail year after year. He therefore made a decision to look for an alternative source of income. “A father is a provider. I knew I had to do my best to earn an income in order to sustain my family,” he says.

Liu looks up from his brick making exercise with a welcoming smile and proceeds to shake the hands of the ACTED Programme Officer. He relates that he has been working with the bridge constructor since February 2016. At that time, he started off as an unskilled worker in the field of construction, but over the months he has gained skills including masonry, carpentry, and plastering, and became an experienced assistant carpenter. Joining a construction business was not easy, especially with limited skills in this field. However, Liu was not to give up and rely on handouts. He worked hard, consistently, learning as much as he could despite having not attended any classes. Since February 2016, his income has increased by approximately 250%, from 1,500 SSP (15 USD) to 5,000 SSP (50 USD) monthly. At this point Liu proudly nods at his success with such an infectious charm. He further explains: “For every 1,400 brick blocks, I get 3,000 SSP (30 USD), which lasts 7 days once I have fed my family.”

Like most people in South Sudan, Liu spends over 80% of his income on food. With the food insecurity situation currently facing South Sudan, people have resulted to selling their livelihood assets, with few, like Liu, holding on to their skills for survival.

With a sad and melancholic look, Liu shakes his head and says: “These are very tough days. Before working on bridge construction, I was a successful farmer. I never imagined that one day I would buy sorghum, because I was a producer, not a consumer. Now things have changed and I have had to switch livelihoods to stay alive.” Liu however says that he has never forgotten the art of farming. With improved access to agricultural land, he plans to prepare his land for the main planting season which will start in May 2017.

Communities at the heart of ACTED’s work

Though a lot is to be desired in Maban and in South Sudan in general, ACTED has learned to tap into local resources such as Liu’s skills and the fertile unexploited lands in order to make a difference. With the main rainy season expected in May, efforts are geared towards investing in agricultural activities in order to tap into the potential of the agricultural sector and improving the living conditions of both refugees and internally displaced persons. This will be done through general food distributions in Wau and Maban, and cash voucher distributions in Mingkaman, but also through managing displacement sites in Juba, Bor, Kajo-Keji and Wau and working with refugees in Maban to prevent sexual and gender based violence.

Understanding the key issues of communities through the eyes of communities by working together to address such challenges is a rewarding course and one that produces sustainable and successful outcomes in the long-run, while ensuring a relationship of confidence and accountability with the communities, which is at the heart of all ACTED’s operations.