Food distributions are essential to save lives and in emergency situations to offer an immediate alleviation, but they do not consider the long-term resilience needs. Supporting households with livelihoods recovery after a shock or in the context of recurring shocks such as conflicts, economic crisis and natural hazards, is also part of the humanitarian action to ensure self-reliance and dignity of the affected populations.

With the support of the World Food Programme (WFP), ACTED intervened with IDPs in Mingkaman and with vulnerable families in Bor, Jonglei State, through General Food Distribution Plus (GFD+) - a complementary program to food distributions seeking to better support households’ recovery from crisis and progressively to rebuild livelihoods after the multiple multi-dimensional shocks affecting South Sudan.

Out of the ten states in South Sudan, Jonglei State is demonstrating the highest percentage of population in situation of acute food insecurity, with nearly 2 million people facing IPC Phase 4 (Emergency) and Phase 5 (Catastrophe) levels[1]. Indeed, Jonglei, as most parts of the country, is frequently victim of massive seasonal flooding and outbreaks of inter-ethnic violence. As a consequence, communities are dramatically vulnerable to displacements, loss of livelihoods and food insecurity. In many locations, immediate food assistance is required to alleviate the suffering of the most vulnerable populations, to prevent a total collapse of livelihoods and to save lives.

To address their emergency needs and build long-term resilience, ACTED, with the support of WFP, is implementing cash transfers alongside resilient agricultural activities in Mingkaman and Bor, Jonglei State.

The names of the beneficiaries have been changed.

Alia, in the Mingkaman IDP settlement

Living in an IDP camp in Mingkaman since 2014, Alia, 36-year-old, and her family of eight have benefited from the GFD+ program in 2022. As a complementary activity to cash assistance, GFD+ supports the affected population with vegetable gardening trainings, financial literacy and business skills. Thanks to the technical support of ACTED teams, Alia has managed to grow her own vegetable garden, harvesting a variety of products such as okra, amaranthus, eggplant, onion and kale. Alia’s harvests increase the food security of her family, but her vegetables are also a source of income for the household. With the money she earns from selling some vegetables at the market, Alia can buy additional goods to those she can get with the food vouchers that are also distributed to her by ACTED as immediate food assistance.

Alia expressed gratitude for ACTED’s support as the small income generated by her vegetables also allows her to afford medical bills for her children. In the future, Alia hopes to increase the size of her vegetable garden. 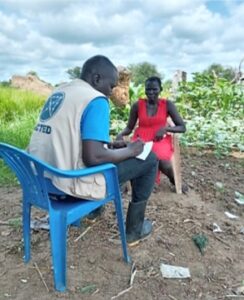 Alia interviewed by an ACTED agronomist about her vegetable garden and skills learnt with the GFD+ support, Mingkaman, May 2022.

Mrs A., a 52-year-old mother living in Bor, is one of the 2 600 beneficiaries of the project. In March, her household’s livelihood dropped below the poverty line, leaving her family unable to meet their basic needs such as clothing and soap. Feeding her children two meals a day was a daily struggle she could rarely complete. In 2022, Mrs A. took part in the GFD+ project where ACTED teams provided her with gardening tools and vegetable seeds. After a few months of trainings on plot demarcation, nursery vegetable beds and transplanting of seedling, Mrs A. harvested her first vegetables.

With her vegetable garden, Mrs A. gains food autonomy, improves the living conditions of her family and recovers her dignity. She said her participation in the project enables her to earn 10,000 South Sudanese pounds (approximately 15 USD) per week from the surplus, allowing her to afford some basic items she lacked for her family. Furthermore, Mrs A. is grateful because she feels empowered as a mother to care for her family. Her successful vegetable garden and new farming skills have convinced other members of her community to take part in the GFD+. 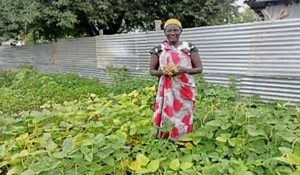 Mrs A. displaying cowpea seeds she preserved in her garden for the next planting season, Bor, Jonglei state, September 2022.

In Bor South County, Mrs Chol suffers from high food insecurity. Wrangling over cattle and severe floodings – impacting agricultural activities and pastures for livestock – are causing important price spikes and supplies shortages in the market. Mrs Chol was seeking food self-sufficiency to secure her children’s nutrition when she heard about the GFD+ intervention and was selected to benefited from the program.

Now, Mrs Chol cultivates her vegetable garden, and the harvests allow her to feed her children as well as afford their school fees. Moreover, the incomes generated from the sale of her vegetables have helped her buy 14 iron sheets to refurbish her roof and to occasionally purchase fish or meat at the market, thus improving the safety of her household. With a continuous production of vegetables throughout the year, she believes her family will live in better conditions and avoid food insecurity. 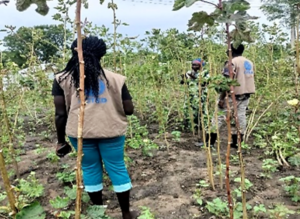 Mrs Chol talking with ACTED teams about the methods she uses to control pests in her okra field. Bor, Jonglei state, September 2022.