In October 2018, Alliance2015 partners Concern Worldwide and Welthunger Hilfe released the 13th annual Global Hunger Index (GHI). The report details the state of hunger and malnutrition in the world and offers recommendations for how to address the root causes of this global issue. Notably, in the 2018 edition, the GHI also links the issue of food security to trends in mass migration, suggesting that hunger, like displacement, is the result of political circumstances, not environmental or natural causes.

In an essay in the GHI titled “Forced Migration and Hunger,” Professor Laura Hammond of SOAS University of London argues that, in order to address the underlying political factors which lead to hunger and displacement, humanitarian action must support affected communities by building resilience in their regions of origin or, if they are already displaced, by supporting their capacity to advance their own livelihoods.

Through the programs below — in CAR, Mali, Chad and the Republic of Congo — ACTED combats food insecurity and forced migration with sustainable interventions.

ACTED’s approach to equitable peacebuilding and sustainable development parallels the GHI’s recommendations. As part of our commitment to zero poverty and zero exclusion, ACTED works with communities to implement innovative solutions to the linked challenges of hunger and migration.

Creating resilience through employment in CAR

The GHI identified the Central African Republic (CAR) as the sole country in the world with extremely alarming levels of hunger. Since 2012, CAR has experienced instability, violence and civil war, disrupting the patterns of daily life for millions of people. The disruption these years of conflict have caused to livelihoods and markets has led to the displacement of over one fifth of the population as well as extremely high rates of hunger, malnourishment and child mortality.

In CAR, ACTED is working to restore market stability and build resilience through employment and peace consolidation. With support from the European Civil Protection and Humanitarian Aid Operations (ECHO), ACTED is creating temporary income generating activities in Bambari, the second largest city in CAR.

This economic project gives youth, women, displaced people, elderly people and people with disabilities access to a temporary income stream. ACTED employed 1,100 unemployed people (80% youth and 52% women) to carry out sanitation projects and restoration of public spaces. The workers receive cash, which is often used to buy food, access health services and pay school fees for children. Some workers also invested in income-generating activities, like small shops and businesses. These activities build resilience and self-sufficiency by re-establishing the markets necessary for long-term stability. 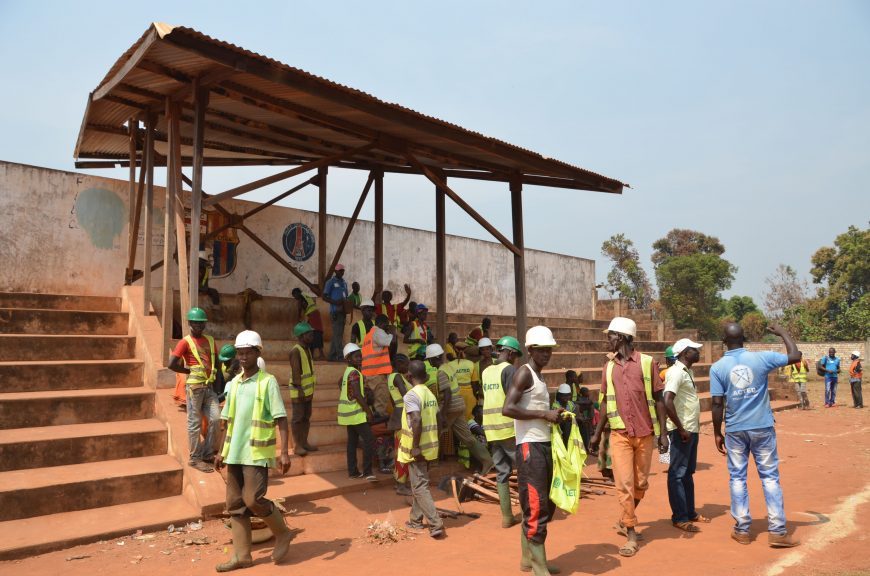 Whereas in CAR, ACTED works to combat hunger by reestablishing markets and livelihoods, the challenge in Mali is to prevent communities from falling into such a dire economic state to begin with. Conflict in Mali has undermined communities’ abilities to respond to shocks, such as the lean season that affects farmers each year from May to September. During this time, food insecurity grows as households deplete their food reserves.

in need of humanitarian assistance in Mali

of the Malian population

living below the poverty threshold

In 2018, this season started remarkably early, in March, following a period of low rainfall in 2017. Livestock quickly ran out of water and grazing land, forcing a premature migration which had devastating effects on the region’s goats and sheep.

In an effort to salvage their livelihoods, many herdsmen slaughtered their animals early or sold them at up to 50% reduction. ACTED responded with emergency livestock food aid for 3,358 livestock-raising households. The nutrient-rich feed allowed animals to survive the lean season and to be sold at market value.

This support will enable farmers to resell their livestock for a fair price to cope with the next lean season. Emergency programming with built-in long-term support is a critical aspect of ACTED’s sustainability strategy.

By empowering communities to advance their own livelihoods in their regions of origin, we can prevent displacement while building resilience against future shocks.

Sitting above only CAR in GHI’s ranking, Chad suffers from an alarming level of hunger in 2018. 4 million people are affected by food insecurity, of which over 600,000 have been displaced.

For those displaced in the Fouli department in the Lake Chad region, ACTED is implementing an emergency food assistance project. Populations fleeing the violence of Boko Haram have left everything behind, and are particularly vulnerable to food insecurity. Today, more than 140,000 people are displaced in the Lake Chad region, within Chad’s borders. With WFP support, ACTED is distributing food and nutritional inputs to nearly 35,000 displaced people and screening and referring malnourished children. 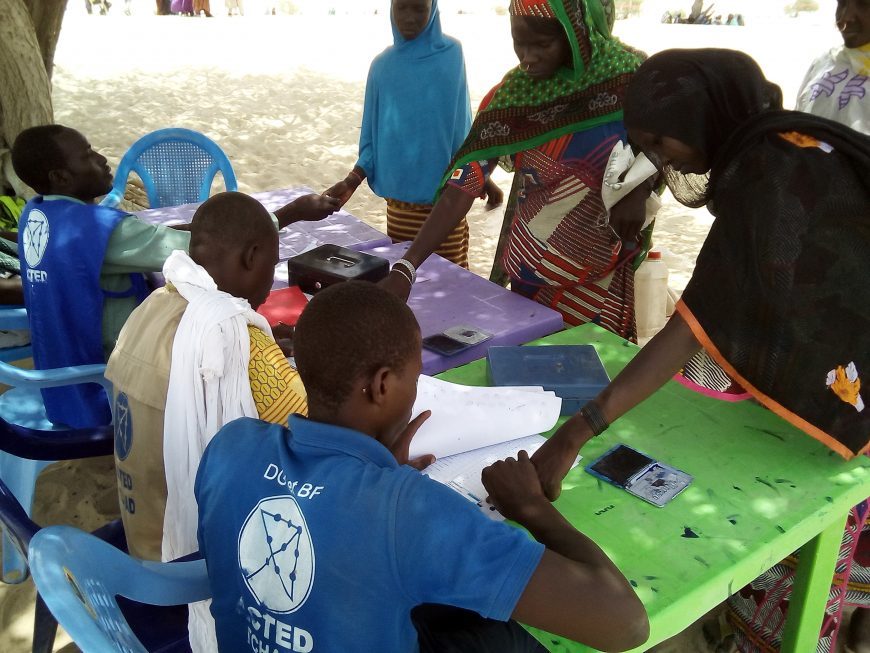 South of Chad, ACTED has launched food distributions in Mindouli, in the department of Pool, Republic of Congo. The department received people displaced by the crisis in 2016. Today, IDPs in the region remain in a state of instability. They rely on ACTED, the main NGO working in Mindouli, for food support. With the support of WFP, 19,200 people have received food aid, including essential food items like rice, beans and oil.

Emergency food assistance is a standard intervention under ACTED’s first programmatic pillar, “Responding to Emergencies and Building Disaster Resilience.” Addressing the immediate needs of food-insecure people is a vital first step in developing longer-term, sustainable development plans. In both Chad and the Congo, ACTED is already providing multi-sectoral assistance, building resilience through reintegration of returnees, economic empowerment and WASH services. 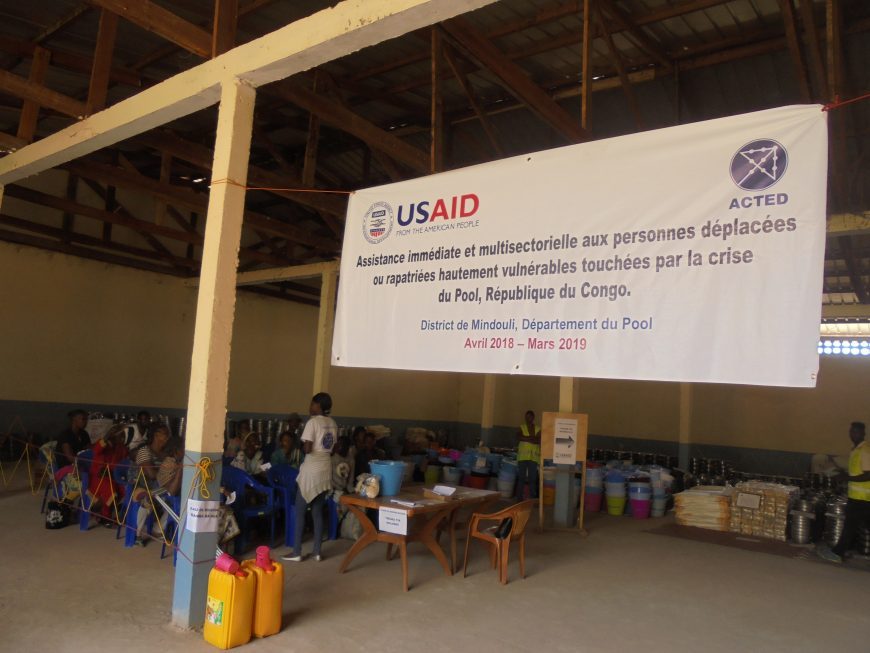 Far from being isolated incidents of unfortunate circumstances, the examples above are part of a global trend. Political instability weakens resilience to conflict, natural disaster and economic downturn, leading to the food insecurity and displacement on a massive scale. The GHI calls for increased efforts and innovative approaches in order for the global community to reach Sustainable Development Goal 2, zero hunger, by 2030.

ACTED supports these efforts by working to increase the capacity of local governments to respond to shocks and protect vulnerable communities from the preventable threat of food insecurity.

By acting today to stabilize local economies, to develop local expertise in climate-smart agriculture and to support displaced communities become self-sufficient, we are investing in a future free of hunger and forced migration.

ACTED mobilizes in response to the Covid-19 pandemic

Can a ‘Circular Economy’ help bring the MENA region out of crisis?

CEO Pledge on Preventing Sexual Abuse, Exploitation, and Harassment by and of NGO Staff

Appeal for a Global Mobilization

While debates around the Nexus continue, ACTED moves ahead