A statement from the Regional Desert Locust Alliance

Nairobi, 23 March 2020 – While the attention of the global community is drawn to COVID-19, the unprecedented desert locust invasion across the Greater Horn of Africa remains an added threat to food security and livelihoods in ten countries. It is critical that activities to control locusts and address their impact on livelihoods continue, with local communities placed at the forefront.

Communities in many of the worst affected areas in Kenya, Somalia, Ethiopia and Uganda are already at crisis levels of food insecurity, having suffered both drought and flooding in 2019. The 2020 Humanitarian Needs Overview for Somalia outlines that 5.2 million people, or 42% or the population of Somalia, were already in need of humanitarian assistance, before the locust invasion. Significant locust damage to crops and pasture is now expected to be experienced during the agricultural season from March to May, which would generate an emergency situation for up to 1.8 million additional people. This would include forced displacement, loss of livestock and increased rates of malnutrition among other corollary impacts. The lack of food for humans and animals is likely to last until the next harvest in November-December 2020.

National NGOs within the Arid and Semi-Arid Lands (ASAL) Humanitarian Platform are some of those at the forefront of the response efforts. With over thirty members and a presence in all the locust affected counties in the ASAL region, they are mobilising communities to support governments efforts to locate and control the locusts before food security and nutrition is undermined further. INGOs in the Kenya Cash Consortium are also supporting this local humanitarian leadership with the provision of technical support and funding.1

While considerable progress has been made by governments and UN agencies to scale up control efforts, it is imperative that NGOs’ and communities’ roles are expanded beyond surveillance to encompass other elements of the response such as sensitization, control, livelihoods and asset protection both now and in building resilience and preparedness for future crises. The value of the role played by local communities in disaster risk reduction activities cannot be overstated. In particular, the involvement of pastoralist communities is critical due to their intimate knowledge of the rangelands and some of the hard to reach places which have been the source of these locusts. Governments, civil society and the international community have also been actively involved in the response and implemented effective coordination mechanisms. The time lapse between the reporting and the actual response has contributed significantly to the destruction caused by the locusts on rangelands as well as their rapid spread across the region. Partnerships between governments, UN agencies, NGOs and communities is therefore critical if we are to effectively manage the spread of the infestation to protect livelihoods and assets.

1. From donors such as SIDA, Thani Bin Abdullah Bin Thani Al-Thani Humanitarian Fund, and their own internal funds.

Communities are asking to be trained and equipped to spray the locusts hoppers as they are sighted; they are able to reach parts of the rangelands that the government teams are unable to due to logistical challenges. We cannot ignore their capacity and abilities to respond. Communities are always the first responders in any emergency and this can’t be any different. With guidance from the relevant government, UN agencies and NGOs, communities are the key to controlling the infestation across the region.

As the global community steps up to respond to COVID-19, efforts to respond to the ongoing locust-related needs must not be undermined. It is essential that the responses both to control the locust spread and to protect assets and livelihoods, are well coordinated, technically sound and appropriate to each specific context, and in conjunction with ongoing responses for pre-existing needs. It is also vital that the locust response starts now, and that funds are released urgently to enable affected communities to cope with the potential loss of crops and pasture and avoid becoming displaced, even more critical now that the added threat of COVID-19 looms.

The Regional Desert Locust Alliance brings together National and International NGOs who are responding to the desert locust crisis in the greater Horn of Africa. The Alliance was formed in February 2020 in response to the increased locust threat to food security and livelihoods in eight countries in the greater Horn of Africa – Djibouti, Eritrea, Ethiopia, Kenya, Somalia, South Sudan, Uganda and the United Republic of Tanzania. 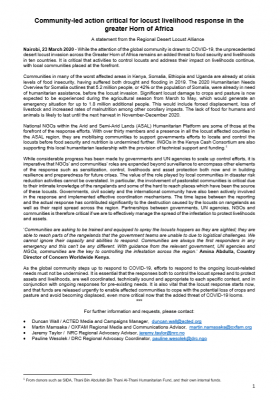 Investing for a 3Zero world: ACTED to raise €9 million in “charity bonds”

Nigeria: ACTED and the REACH team condemn the assassination of their team member and four other humanitarian workers and captives

ACTED mobilised on the food crisis in Africa