Over 230,000 conflict-affected Syrian refugees have sought refuge in Iraq since the start of the war in Syria. Among these, over 111,000 reside in Erbil governorate and almost 30,000 reside in Sulaymaniyah governorate in both camp and non-camp settings . ACTED’s Communicating with Communities activities in Erbil and Sulaymaniyah governorates in Iraq ensure that refugees and internally displaced people have access to unbiased information on their rights and obligations as well as the services and assistance that are available to them.

Awareness-raising on DAFI and HOPES university scholarships for Syrian refugees

In September and October 2016, ACTED’s Communicating with Communities teams in Erbil and Sulaymaniyah governorates raised awareness on the DAFI and HOPES university scholarships for Syrian refugees. “DAFI” is the German acronym for the Albert Einstein German Academic Refugee programme and “HOPES” is the Higher and Further Education Opportunities and Perspectives for Syrians programme, funded by the European Union. These full scholarships provide refugees aged 17-29 the opportunity to study at any faculty at public universities in the Kurdistan Region of Iraq, and provide them with a living allowance. DAFI and HOPES scholarship applications opened on 15 September and closed on 30 October 2016.

Refugee education is a major casualty in conflict. At the higher education level, just one per cent of refugees attend university, compared to a global average of 34 per cent.

UNHCR, ACTED’s donor for Communicating with Communities campaigns, was the leading agency for the promotion of these scholarship programmes and involved its partners in this process, including ACTED.

In Erbil Governorate, ACTED reached a total of almost 1,900 Syrian refugees, both men and women equally, through 44 awareness-raising sessions in Basirma, Darashakran, Kawergosk and Qushtapa refugee camps, as well as in urban areas of Erbil and Shaqlawa. ACTED also trained partners on the DAFI and HOPES scholarships programmes and on how to conduct awareness-raising sessions on these programmes. In the four refugee camps, ACTED trained INTERSOS and Al Masalla while in urban areas, INTERSOS, QANDIL and UNHCR counsellors were trained.

In Sulaymaniyah, ACTED coordinated with Civil Development Organisation who invited participants to the sessions organised by ACTED and distributed the information booklets designed and printed by ACTED to Syrian refugees through door-to-door visits. A total of 16 awareness-raising sessions were conducted across urban areas including Sulaymaniyah City, Rania and Halabja districts as well as Arbat refugee camp. ACTED Sulaymaniyah reached some 300 Syrian refugees, both men and women equally. 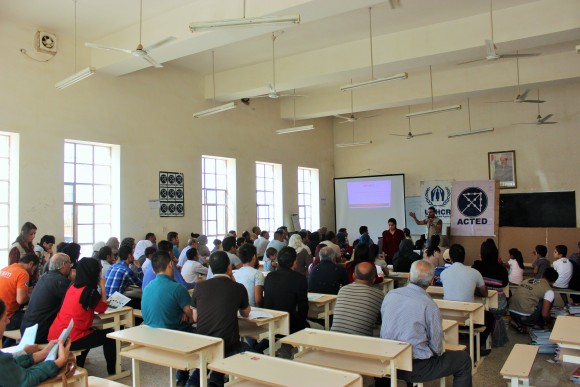 Overall, 1,151 Syrian refugees applied for the DAFI and HOPES scholarships. Interviews for both programmes were conducted by a joint DAFI-HOPES panel comprising UNHCR, the German Academic Exchange Service (DAAD), the German Embassy, UNICEF and UNISA.

Finally, 120 DAFI and 30 HOPES candidates were selected. UNHCR submitted the list of selected candidates to the Kurdistan Regional Government’s Ministry of Higher Education and Scientific Research for the candidates to be placed in local universities.

The DAFI and HOPES university scholarship programmes are expected to be re-conducted in 2017.

In 2015, UNFPA estimated that rates of children married below the age of 18 in Iraq ranged between 16.7% and 19%. UNHCR research demonstrates that child marriage in the Kurdistan Region of Iraq results from interrelated religious, social and economic factors. Indeed, the primary causes of child marriage cited by families who engage in this practice are poverty and economic vulnerability as families can no longer afford to provide for their young girls. Furthermore, Syrian refugees in particular have limited access to basic health services, education and employment. Families may therefore opt to marry their daughters early, believing that their husbands will protect them from sexual abuse and economic hardship.

ACTED’s awareness-raising campaign delivered nine key messages including one on the legal age of marriage in the Kurdistan Region of Iraq (18 years); one on the fact that all children have a right to education and to finish their education even if they were married before the age of 18; and another on the legal consequences of forced marriage which is punishable with imprisonment under Iraqi law. The purpose of this campaign was to achieve behavioural change at the community level through the provision of legal advice and emphasis on service provision from partners such as the Kurdistan Regional Government’s General Directorate of Violence Against Women (GDVAW) and the Department of Labour and Social Affairs (DoLSA).

The child marriage campaign, which consisted of three stages, was centered on dialogical sessions that aimed to go beyond awareness-raising towards an understanding of issues related to child marriage. The first two stages involved community leaders chosen by community members and health, religion, education and legal experts. Sessions in small groups were held in order to facilitate discussions on this contentious issue in a safe and relaxed environment. Four sessions were held in community centres, facilitated by 12 experts and attended by 57 participants, including 17 adolescent girls. 54 sessions were held in private homes, facilitated by 15 experts and were attended by 775 individuals, including 33 boys and 114 girls.

The final stage of the campaign involved 32 wider community sessions in schools attended by Syrian refugees. ACTED partnered with Triangle, Terre des Hommes and Save the Children to deliver the nine key messages through an age-appropriate cartoon, highlighting the benefits for children of delaying marriage to the legal age of 18. These 32 school workshops, facilitated by 26 experts, reached a total of almost 1,100 boys and girls.

What is next for ACTED Communication with Communities in Iraq in 2017?

ACTED’s Communication with Communities activities, funded by UNHCR, will be renewed in 2017 in Erbil and Sulaymaniyah governorates.