When viewed through the lens of three specific groups – women, children and youth, and people with disabilities – some of the largest deficits in practical access to justice in Kyrgyzstan become clear. Women face many barriers to the full enjoyment of their rights. Many are subject to discrimination, violence, and economic dependence; and a large percentage of them lack a valid residence permit, making it particularly difficult to access basic social services. Children and youth also face serious challenges to accessing justice. Their lack of experience and education, economic dependence, and lack of necessary documents makes it more difficult for them to engage with the formal and informal justice sectors. Finally, people with disabilities are among the most vulnerable of all. Physical inability to enter justice and educational institutions and restricted access to public information limits their ability to participate in every-day life activities and many of them face serious human rights violations. Furthermore, a very large amount of people with disabilities are not holding any residence permits, required for access to medical care, education, and other important services. There is a need to further promote and enhance access to justice and legal aid for vulnerable group. This is true especially in rural areas, where access to legal advice and representation is limited by a lack of qualified lawyers, lack of trust in the justice system and in lawyers more generally, as well as by the cost of legal services. In this framework ACTED implemented from January 2015 to June 2017, in partnership with Adilet and the Eurasia Foundation for Central Asia, a European Union funded project entitled “Building the Role of Civil Society to Improve Access to Justice and Strengthen the Rule of Law in the Kyrgyz Republic”. The project built the capacities of CSOs to uphold Rule of Law and facilitated access to justice for marginalized groups through legal consultations provided to above-mentioned vulnerable groups and awareness-raising.

Laying the ground for further improved access to justice for everyone

The project received overwhelming support from the communities who noted its out-standing benefits. The information collected through the legal consultations is not only useful to identify trends and patterns in legal issues but, as one of the recruited lawyers emphasized correctly, “it can also be used in the future to improve access to justice for vulnerable groups” . However, as another of the recruited lawyer however stressed it, “work should not be limited only to a judicial decision of the dispute, but lawyers must also actively take part in both pre-trial dispute and enforcement proceed-ings”. It is therefore important to follow-up, pave the way and continue efforts towards a better situation for everyone.

Promoting free legal aid consultations for the most marginalized

By setting up and supervising the hiring process of 16 new lawyers, ACTED supported the expansion of Adilet’s lawyer’s network in the four target regions of Osh, Jalal-Abad, Naryn and Issyk-Kul. The 16 newly recruited lawyers were trained and provided over 5,500 free legal aid consultations (against a largely over-met target of 800) to vulnerable groups. As one of the lawyers highlighted it, “societies often lack the ability to protect their rights, even if they are reflected in legislation and the constitution. It is necessary to expand the free legal aid of all organizational and legal forms (legal clinics, lawyers for state-guaranteed legal aid, NGOs) in all remote regions”.

ACTED did uphold a certain balance in the consultations provided to the different oblasts:

Interestingly, the main issues that were raised during the consultations related to family disputes (divorce, recovery of alimony, division of property, determination of the place of residence of children), establishment of legal facts, land disputes, inheritance, etc. ACTED was wondering why? According to one the recruited lawyer’s saying, one of the reasons for this prevalence in family issues is because “family disputes are the category where in any case children suffer the most”. 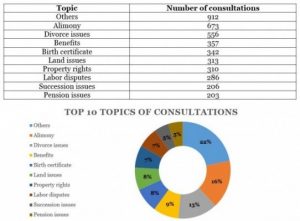 Above-mentioned top 10 issues were raised during 4,158 out of the 5,561 consultations and accounted for 75% of the total number of issues raised. 19 other issues (i.e. Determination of the place of residence of child, establishment of paternity, crime, division of property issues, etc.) share the last ranking’s spots. While looking a bit closer to the figures and in particular within the different oblasts, it is worth noticing as the lawyers reported “that most of the issues raised were the same, with slight differences in proportion in the different oblasts.” 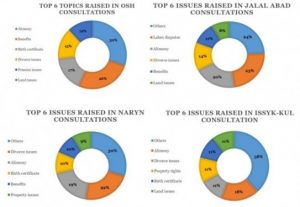 Rule of law and access to justice is becoming an extremely important part of interna-tional aid actors in Kyrgyzstan and ACTED will continue to leverage its gained expertise in the field to widening legal empowerment and access to justice to vulnerable groups and build the capacities of CSOs.