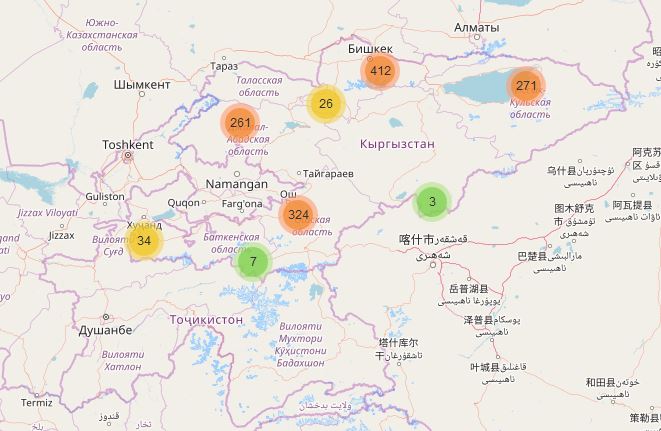 ©ACTED
An interactive map on the access to rule of law institutions across the Kyrgyz Republic, produced within ACTED's project and handed over to the Ministry of Justice, 2017

Kyrgyzstan, ranked 120 (out of 188) in terms of human development index, still faces major human development challenges. One of the systemic barriers that prevent sustainable human development for all concerns access to the Rule of Law: despite reforms of administrative justice and efforts towards effective application and enforcement of the law, accessing the legal system in Kyrgyzstan can be restrictive and confusing for marginalised and remote rural populations, leaving many people behind. ACTED has been working with local civil society organisations and marginalised populations to ensure a fair access to justice for all, according to the United Nations Development Programme (UNDP) Human Development Reports.

Over the 2015 – 2017 period, ACTED in Kyrgyzstan has been implementing an EU-funded project aiming at strengthening the capacities of civil society organizations (CSOs) to uphold the Rule of Law and to facilitate access to justice for marginalized groups (i.e. isolated rural communities, with a special focus on ethnic minorities, women, youth, and persons with disabilities). The project was carried out together with two local partners: the legal clinic Adilet and the Eurasia Foundation of Central Asia (EFCA). Today, the project is over and this provides us with a good opportunity to look back at what has been achieved.

Access to Rule of Law in Kyrgyzstan is hampered by several factors, ranging from low density of legal services in peripheries, high direct and opportunity costs of justice institutions on plaintiffs, to structural deficits in terms of obstruction of justice, which permeates Rule of Law institutions. This situation is signified by wide-spread corruption and abuses, which describe key causes of persistent distrust towards duty bearers.

Ethnic minorities are subject to obstructed legal procedures and courts proceedings. Furthermore, women, due to social stigma and cultural marginalization, are frequently prevented from the usage of legal tools, and lack of infrastructure and institutional bias frequently prevents persons with disabilities to make their case heard in front of justice institutions. As an overarching factor, low levels of legal literacy in remote rural areas and among vulnerable populations further complicate this development challenge.

Empowering local CSOs: A key step to strengthening equal access to justice for all

ACTED has been leveraging its expertise and knowledge to strengthen the capacity of CSOs to document rights violations, provide legal assistance and facilitate the access to legal aid for vulnerable groups, and raise awareness among the general population on the principles of Rule of Law. But what concretely came out of this project?

First, building on collected data by CSOs and early-warning networks (EWN), two maps on the access to rule of law institutions across the Kyrgyz Republic were developed. Those maps will be helping rural residents to know from where exactly they can get legal aid.

Link to the interactive map 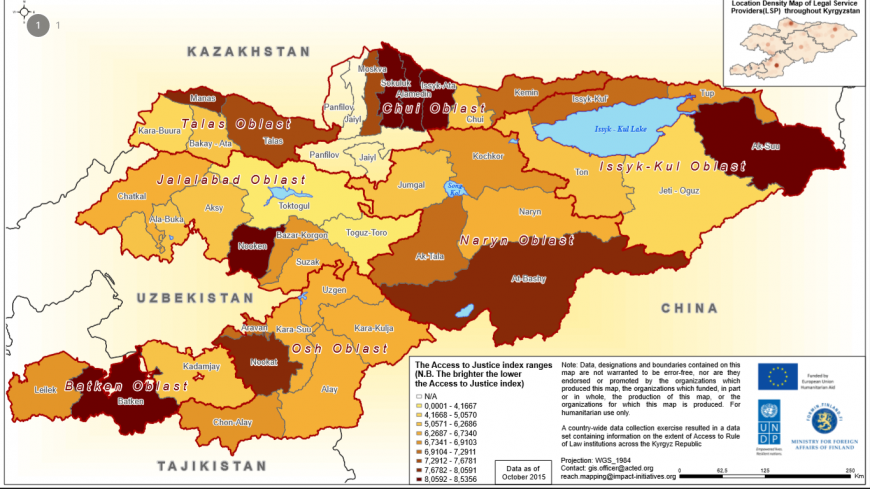 In addition to a massive outreach campaign, performed by ACTED’s partner EFCA, more than 30 media products on ACTED’s project (including 20 reportage stories, TV shots, radio programmes and newspaper articles) were shot and broadcasted, reaching a total audience of more than one million individuals in the four main regions of Kyrgyzstan.

Eventually people better understand that access to legal aid is a right. One of the beneficiaries for example had faced some family issues and was deprived of her parental rights. She explained that she started looking for someone who could help return her parental rights and find out about ACTED project: “Then I learned about the project and turned to a lawyer – he helped me to collect all the documents and file a lawsuit. This summer my parental rights in respect of my daughter were returned to me”.

Promoting free legal aid consultation for the most marginalized

ACTED also supported its partner the legal clinic Adilet to expand its lawyer network and as a result, 16 new and young lawyers from all over the country were recruited and trained. Eventually, they provided over 5,300 free legal consultations – against the 800 initially foreseen. Out of these 5,300, over 4400 to women, around 600 to ethnic minorities, and over 470 to persons with disabilities. In addition, over 300 people also had the chance to get their cases be represented in the court. To sum up the nature of appeals, it can be concluded that most of the problems of the citizens concern family matters, namely related to divorce, recovery of alimony, as well as determination of the place of residence of children. The success of these free legal consultation campaign also reflects a large unmet demand for free legal aid in the target regions. Lastly, through advocacy meetings and multi-stakeholder workshops, ACTED could bring together leading legal experts, CSOs, and local authorities to reflect on existing shortcomings in the implementation of national legislation on free-legal aid.

This will only be another drop in the ocean but step by step ACTED is confident in contributing to joint efforts to strengthen the rule of law and improve access to justice in Kyrgyzstan, which is full of challenges but more importantly potential.