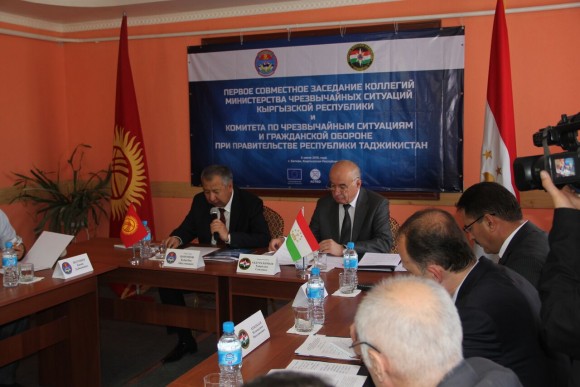 ACTED and its partners have launched in August 2017 in Khujand a new phase of integrated watershed management for Disaster Risk Reduction (DDR), the so called DIPECHO X project, funded by EU Humanitarian Aid. The flagship project directly builds on the achievements of previous DIPECHO’s interventions implemented in the Aksu and Khoja-Bakirgan watersheds

It aims to consolidate and institutionalize the management of transboundary watersheds through Natural Resource Management (NRM) and Climate Change Adaptation (CCA) strategies for better Disaster Risk Reduction and Disaster Risk Management, as per the priorities indicated in the Sendai Framework for DRR 2015-2030.

The project directly targets 30 communities from all municipalities of the Khoja-Bakirgan and Aksu watersheds, both in Tajikistan and in Kyrgyzstan, for 18 months. Overall, the programme will benefit more than 84 000 people in targeted communities.

ACTED’s approach considers watersheds unit, promoting a comprehensive management of land and water resources, which transcends administrative borders. To this end, the Action adopts a Community-Centered approach, targeting those communities from both watersheds that have been identified as at highest risk of disasters and strengthening the connection between those living upstream and downstream. Moreover, it links them to institutional structures at higher levels (municipal, district, regional, cross-border) and connects them regionally, to allow them to take informed DRM-decisions based on watershed ecosystems and their interaction with natural resource management practices.

This Aaction, therefore, attempts at integrating the intervention from the community level (bottom-up) with enhanced regional cooperation (top-down). To achieve this objective, ACTED will engage with the communities identified as at high and medium risk of disaster in the Khoja-Bakirgan and Ak-Suu watersheds in two ways, based on the assumption that (i) empowered and strong local communities will have the capacity to (ii) better cooperate on a regional level. Cohesion on the regional level will in turn strengthen local resilience and thus establishing a virtuous circle of developing preparedness and response capacity. Like in previous DIPECHO projects, the particular focus will be given to enhancing regional cooperation between MES and CoES and strengthening trans-boundary Early Warning System.

The European Union with its Member States is a leading global donor of humanitarian aid. Through its Civil Protection and Humanitarian Aid Operations department (ECHO), the EU helps over 120 million victims of conflict and disasters every year. With headquarters in Brussels and a global network of field offices, ECHO provides assistance to the most vulnerable people solely on the basis of humanitarian needs, without discrimination of race, ethnic group, religion, gender, age, nationality or political affiliation.

The projects funded by the DIPECHO programme include simple and inexpensive preparatory measures, often implemented by the communities themselves. They have proven extremely effective in limiting damage and saving lives when hazards suddenly strike. DIPECHO projects will typically emphasize training, capacity-building, awareness-raising, establishment or improvement of local early warning systems and contingency planning. For this project, the European Commission will be providing €300,000 towards project implementation.

ACTED, a leading international French NGO founded in Afghanistan in 1993, extended its activities to Tajikistan in 1997 and to Kyrgyzstan in 1999. ACTED’s programmes are serving the most vulnerable, conflict-affected/conflict-prone or marginalized areas through implementing a multi-sector and multi-disciplinary approach to social and economic development. Over the past 18 years, ACTED has implemented in the region a wide range of projects covering sectors including disaster risk reduction, natural resource management, and rural economic development.