Like the rest of the world, the Central African Republic must face the Covid-19 pandemic. In an effort to protect vulnerable populations, ACTED is active in the North-East and South-East of the country. The funding provided by Bureau of Humanitarian Assistance has allowed the support of populations in six localities: Bambari, Bria, Birao, Bangassou, Zémio and Obo.

These towns have been hosting displaced populations for several years as a result of conflicts and attacks committed in the country. The local population has experienced several phases of intense instability, and is still marked by the “events”. This is how periods of crisis and insecurity are generally called.

Between July 7, 2020 and January 7, 2021, ACTED conducted prevention activities against Covid-19 in Central African Republic, thanks to the support of BHA.

In the villages, the settlement sites of displaced families, or in the urban neighbourhoods, many people live below the poverty line. Sources of income are often limited to cutting wood in nearby forests to sell bundles on local markets, or being recruited as day labourers in the fields of private individuals.

Empowering the most vulnerable to protect them against the virus

The most vulnerable populations have too few resources to spend on hygiene and protection items. Buying simple items such as masks, soap or even buckets to wash their hands and protect themselves from the virus is impossible.

The challenge in the east of the country is to remind people that the virus does exist in areas where a large proportion of the population is illiterate and has difficulty accessing information.

In 2021, the adult illiteracy rate in Central African Republic is 43%.

ACTED has used several channels and adapted its action to reach the largest number of people. 2,880 radio spots have been broadcasted through the existing community radios in Bria, Bambari and Bangassou. ACTED’s teams have conducted sensitization caravans with a car touring the neighbourhoods of the villages surrounding the cities. Town criers have also criss-crossed the neighbourhoods of the 6 towns for 3 months with megaphones and key messages on Covid-19.

In the most remote areas, few tests are carried out. In order to slow down the spread of the virus, ACTED is conducting information sessions with the vulnerable public and sensitizing them to the danger of the virus and its symptoms. To this end, ACTED targeted key people in the community for training over 3 days. 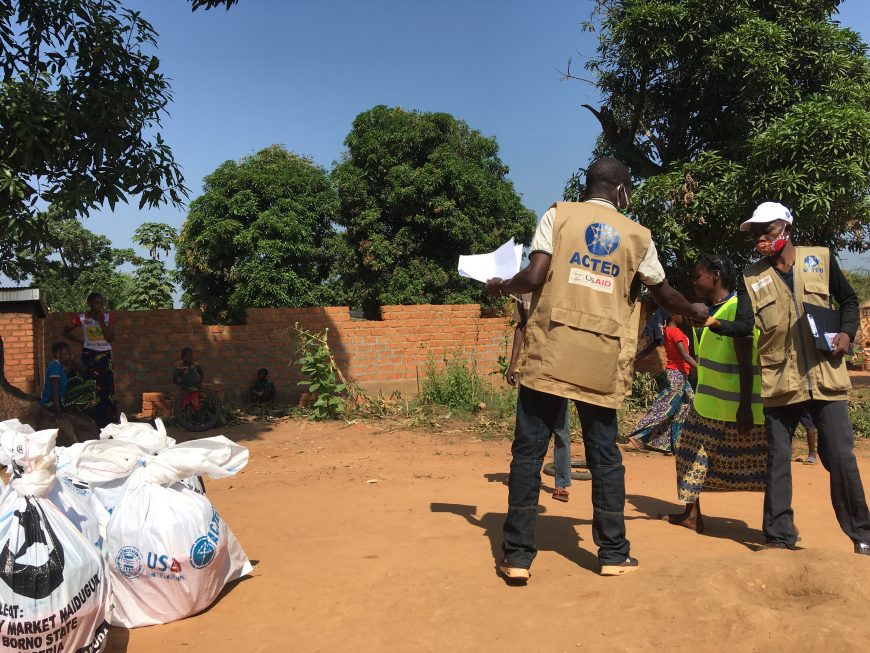 The project has enabled all types of people, including the poorest and most isolated, to have access to the necessary knowledge to protect themselves from the virus.

ACTED is distributing kits to families whose living conditions are the most precarious so that they have the necessary material to protect themselves. Each targeted family receives 6 washable masks, 24 pieces of soap, a bucket with a tap and a lid as well as a basin for hand washing. To promote access to water and compliance with barrier practices, ACTED has set up 30 handwashing stations in popular locations.

All the places targeted by ACTED to conduct the distribution were covered in 10 days.

In the current health context, ACTED had to adapt its activities. As a general rule, kit distributions are carried out in a central location. Populations in need are informed and gather at the meeting point. ACTED has now opted for door-to-door distributions. This avoids gathering big groups of people and thus limits the risks of Covid-19 transmission. Sensitizations were also conducted for small groups of people representative of the different communities and able to transmit information (elderly people, representatives of local populations, displaced families or families returning after displacement, etc.) 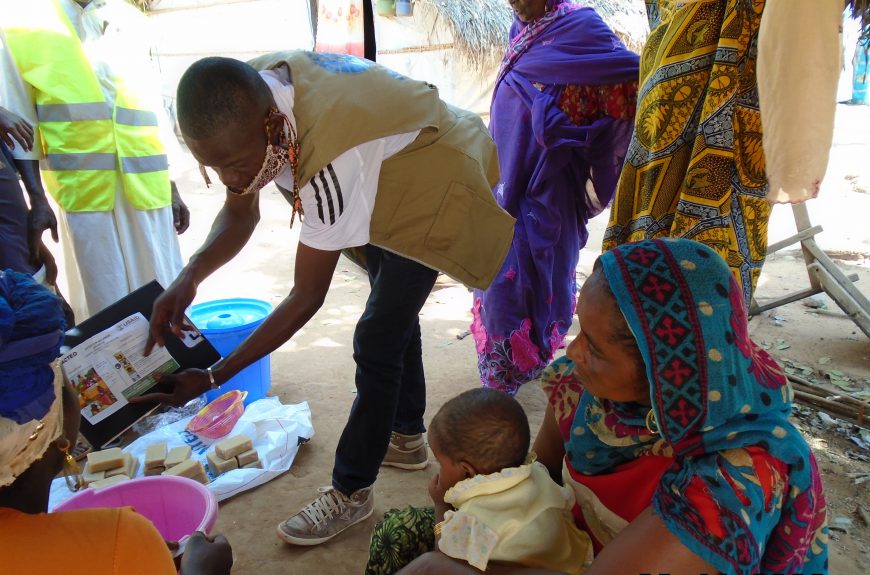 Distribution and sensitization to Covid-19 symptoms and means of protection

ACTED has subsequently carried out distributions in Bambari as well as in the settlement sites of families displaced by previous conflicts in the Ouaka region.

How does ACTED identify vulnerable people in communities in CAR?

Each location has been chosen according to several criteria. ACTED favours places where little information on Covid-19 is disseminated, where no distribution has taken place and where living conditions are the most precarious. The targeted populations often live in fragile or deteriorated dwellings. This is particularly true of shelters installed on sites for displaced people.

In Bambari, 1,104 families have received a Covid-19 protection kit. Distributions are also being carried out in five other localities in CAR: Bria, Birao, Bangassou, Zémio and Obo. In total, 7,225 very vulnerable families will have received the kit provided by ACTED in the framework of the project, and will thus be able to better protect themselves against the disease.

The project has allowed the population of the region to have access to information on the virus as well as on what to do without their income or their place of living affecting their ability to protect themselves from the virus.

ACTED relaunches education in Obo with help from local parents

Success Story: How Jean-Pierre went from a concerned parent to school principal