Tillabéri: ACTED strengthens the food resilience of 21 villages in Niger

The Tillaberi region, in Niger, is located in the heart of the Sahel, on the border with Mali and Burkina Faso. In this desert area, the inhabitants of isolated villages must face insecurity and climate change to ensure their subsistence during the driest months of the year. More than 600,000 people in the region are food insecure.

With the support of the Bureau for Humanitarian Assistance, ACTED is providing assistance to crisis-affected populations in three Northern departments of the Tillabéri region: Banibangou, Abala and Ayorou.

ACTED‘s intervention includes four types of activities that target the most vulnerable families: monetary assistance for food access, support to diversify the diet during the rainy season, care for children affected by malnutrition, and collective activities for the rehabilitation of degraded lands.

Distribution of vouchers and cash transfers to 2,100 vulnerable families

In Niger, cereal fields are harvested at the end of the summer, and reserves are sufficient to cover the needs of families during the nine months of drought, which is approximately the rest of the year. Between June and September, when the reserves are exhausted, the period known locally as the hunger gap (lean season) places the population in a situation of great fragility.

Souleymane, a 45-year-old farmer from Ayorou and father of 7 children, said that the intervention enabled his family to endure the lean season.

From February to October 2021, ACTED has carried out 9 distributions in the form of vouchers and cash transfers to 2,100 households (16,800 people) in the departments of Abala, Ayerou and Banibangou. In addition, 806 households received 32,500 CFA francs during the lean season, i.e. three months of distributions.

To improve access to food for vulnerable households, ACTED has organized food distributions in the form of fairs and cash transfers.

For the fairs, ACTED distributed vouchers that the most vulnerable people could use to buy the food of their choice from local partner traders. When the context allowed, ACTED provided cash transfers so that communities could have the financial resources to cover their food needs. During these interventions, each household received the equivalent of 32,500 FCFA in vouchers or cash during the lean season and 16,250 FCFA during the rest of the year. This corresponds to the amount needed to cover the household’s food needs for one month (i.e. 2,100 Kcal per person per day).

Promotion of permaculture and regeneration of degraded lands

In order to support the resilience of populations facing food insecurity, ACTED has supported agricultural producers in the development of market gardening. ACTED‘s teams, in collaboration with the technical services of agriculture, have trained 90 people who were provided with seeds and farming kits in Ayérou and Abala in June 2021. At the end of the training, the beneficiaries have set up small production sites (20 m² of crops protected by fences) under the supervision of ACTED teams. Despite the climatic constraints recorded this season, the farmers participating in the project were able to produce food crops such as moringa, cowpea, okra and squash, which are very popular crops in the region. This activity has not only improved the nutritional quality and diversity of the beneficiaries’ diet but has also provided a complementary source of income through the sale of part of the production. 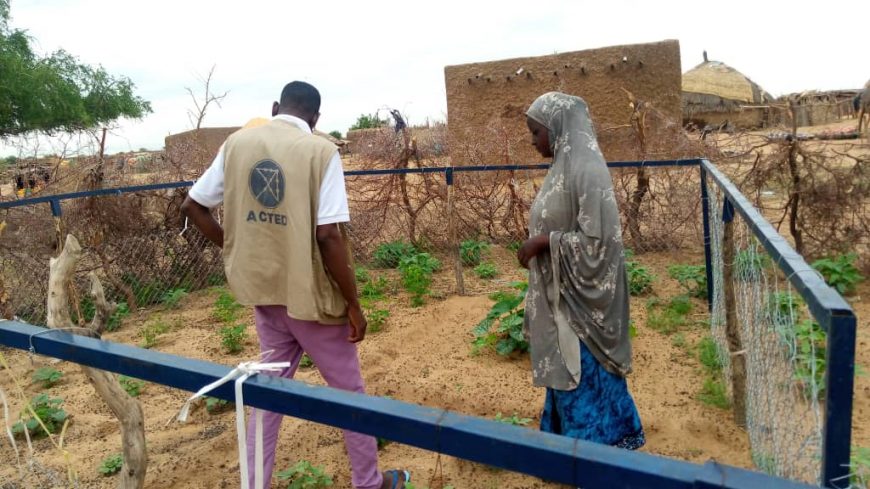 In order to ensure access to livelihoods for the communities of Tillabéri, ACTED has implemented land reclamation activities. With the support of the environmental services, ACTED teams trained 90 people in the construction of rainwater retention structures called half-moons. 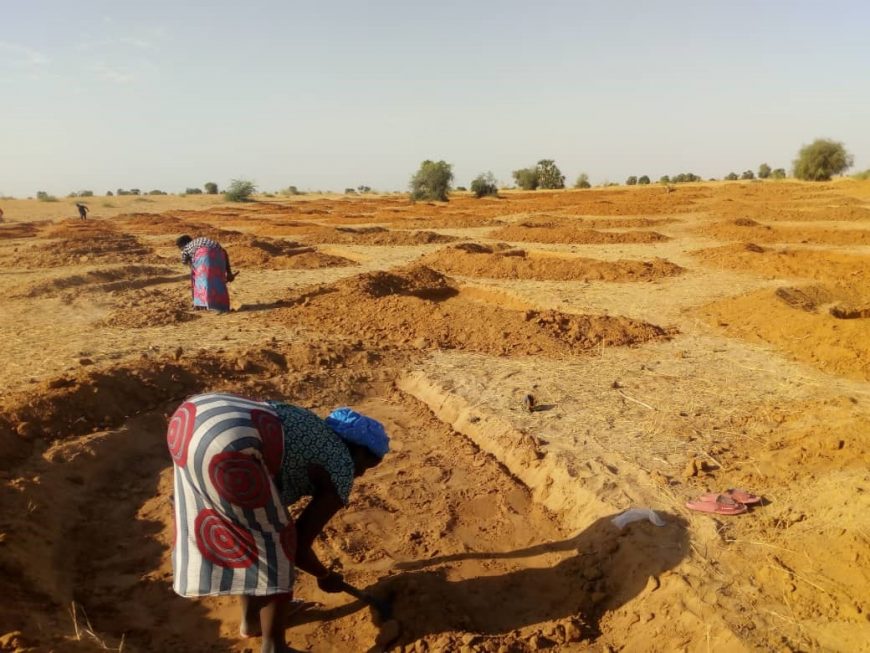 Since the death of her husband, Waha has been providing for her family of 6 by selling charcoal at the weekly market in Ayorou. Her family is part of the beneficiary households of the project.

“Thanks to ACTED’s support, I can provide two meals a day for my family, which we could not afford before.

I also participated in the land reclamation activities (agricultural half-moon), conducted in my village by ACTED. The money I was able to save allowed me to buy poultry which I am now raising. The purchase of the poultry has a double purpose; on the one hand we can use the eggs to improve the nutritional quality of our food and on the other hand I can resell the eggs for economic purposes. We are very grateful to the NGO ACTED, for all these actions to improve our living conditions” she declared.

A total of 1,878 half-moons have been made in 6 sites in Abala and Ayerou with the participation of the communities. These half-moons have allowed the capture of rainwater to regenerate the water table by limiting runoff and land leaching.

In order to prevent malnutrition among children aged 6 to 59 months, ACTED, in collaboration with the health centers of Abala, Ayerou and Banibangou, trained mothers on the use of brachial perimeter measurement tapes (measurement of the average and upper arm circumference) in order to detect signs of malnutrition.

ACTED‘s teams have referred the children respectively to the ambulatory nutritional recovery centers for moderate and severe malnutrition (CRENAM and CRENAS) for a management adapted to their needs.

The referral was facilitated by the collaboration with the NGO ALIMA, which provided ACTED with the referral forms. This action of ACTED has not only allowed to improve the nutritional status of the children under care (11% increase of the arm circumference in three months) but also to reduce considerably the number of malnutrition cases to zero at the end of the project.

Through this project, ACTED‘s interventions have provided the populations with short term cash resources to purchase food, and in the long term to reinforce their food resilience. They have also contributed to support the recovery of local economic activities which were weakened by the security crisis.

Tillabéri: ACTED strengthens the food resilience of 21 villages in Niger