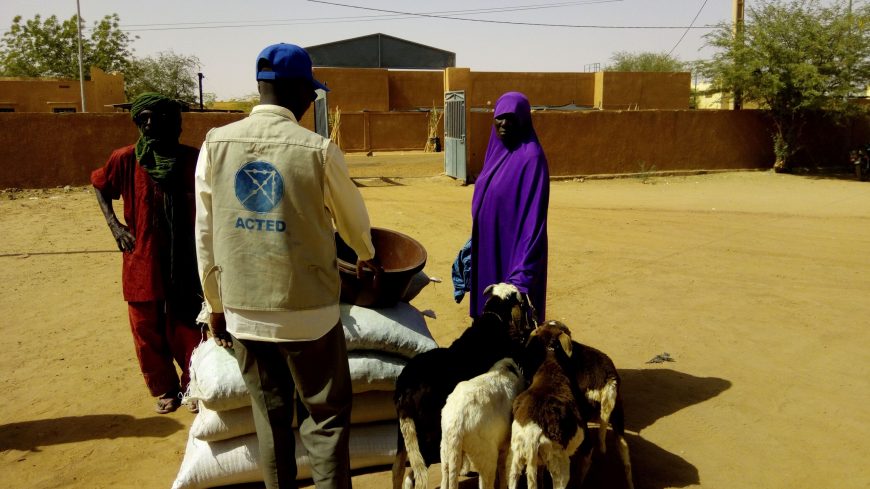 ACTED 2017
Distribution of support kits for the development of income-generating activities in the fattening sector, Ansango (Mali)

Insecurity and political instability in Mali have led to the massive displacement of populations, with more than 130,000 Malians displaced in neighbouring countries even now (43,3% in Niger, 33,6% in Mauritania and 23,1% in Burkina Faso). Malian refugees are very present in Niger, particularly in the Tillabery region, where they have been settled in the three refugee camps of Tabareybarey, Abala and Mangaize. Since the signing of the Peace Agreement in June 2015, return movements are continuing supported by tripartite agreements between Malian government, the United Nations High Commissioner for Refugees (UNHCR) and the three main governments hosting refugees from Mali. For 2017, UNHCR expecting a return of 16,000 people from neighbouring countries 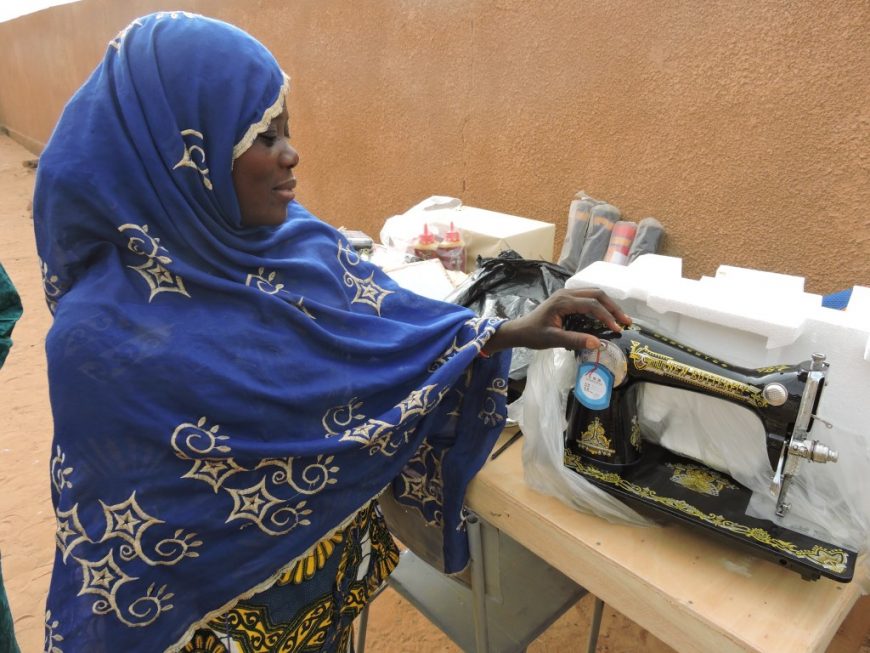 With a cross-border approach between the camps in Niger and the areas of return in the Menaka and Gao regions of Mali, ACTED supports the displaced, registers population movements, and participates in their economic and social integration. With the support of the Office for Population, Refugees and Migration (BPRM), ACTED is implementing income-generating activities and vocational training for vulnerable people in order to encourage the economic recovery of post-conflict areas and to assist displaced and returned households.

In Mali, ACTED trained 40 people to income-generating activities, such as handicrafts, fattening and small business, and supported 20 youths during vocational trainings of three months on job such as sewing, mechanic or restoration. In Niger, 50 people were trained to income-generating activities, such as small business, fattening or breeding, and 50 youths were supported to participate in trainings in mechanic, carpentry, hairdressing, sewing or restoration. Thanks to the multiyear support of BPRM, ACTED follows these people over three years to ensure the sustainability of their activities and the strengthening of their resilience capacities. 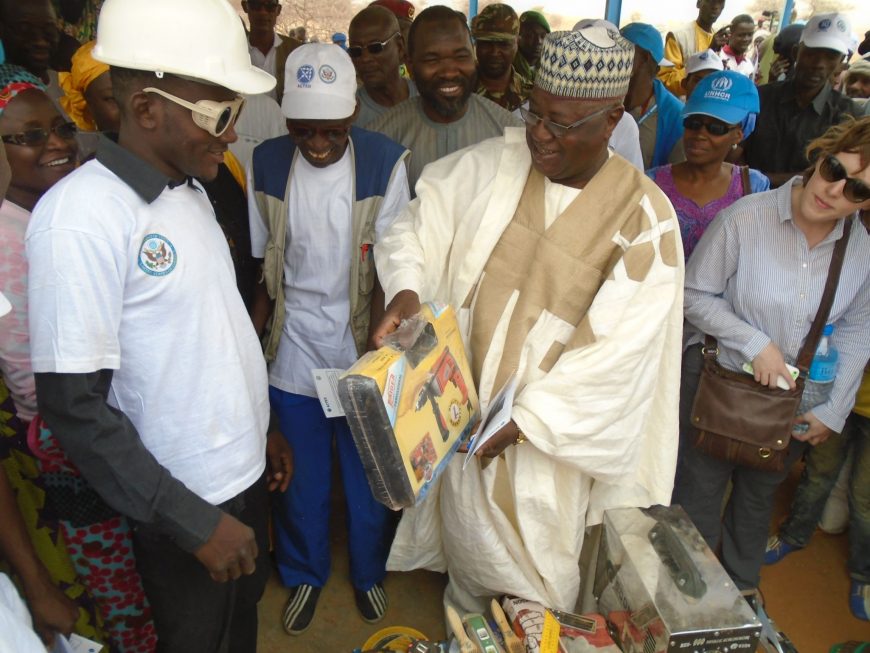 Sustainable and stable economic activities: the testimony of Aichatou

Aichatou is the mother of eight children, four girls and four boys. Her husband is a driver in Menaka. In 2012, following the political military crisis, Aichatou fled to Niger with her family to take refuge in the camp of Mangaize. “I chose to go to Niger because it is the country closest to me and I had no money to go to other country or to the South of Mali. All those who did not have money or family in the South chose Niger just to cross the border. We had a two-day drive to the camp because not only the truck was overloaded, but the road was in very bad condition”. Since 2014, Aichatou has benefitted from the support of ACTED: food assistance, specialised training in inventory management and market, and the so-called “AGR” kit to the development of income-generating activities and to carry them out. In 2014, Aichatou participated in the program of income-generating activities implemented in Niger, before returning to Mali in 2016 to carry out its activity. Since then, ACTED regularly supports her to ensure the impact of the program and to adapt to her needs.

“As part of ACTED’s programs, I once again chose the activity I mastered, that is to say, the sale of condiments, because I have experience in this sector”. Before the conflict, Achaitou owned a small shop where she sold condiments in the street.

Today, thanks to the support of ACTED, I can sell to the market. One day I intend to open a large shop for the safety of my products and have a place for storage.

Aichatou works in Menaka every day and provides his family with food, school supplies and clothing. Reintegration dynamics remain difficult for returnees in remote areas such as Anderamboukane or Menaka. Families often find poor housing, lack of access to employment, and precarious living conditions. ACTED intends to continue supporting these households in need over the coming months. 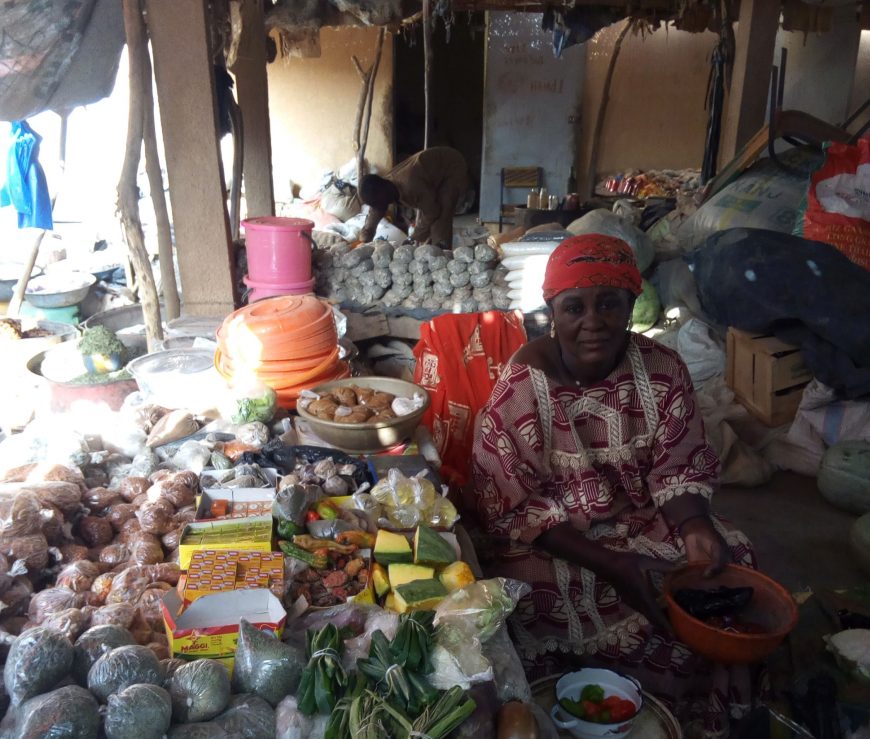 North Mali in the face of climate change