Gender-based violence (GBV) has, for many years, been a forgotten issue in Uzbekistan. While there is no official data on GBV in the country, domestic violence against women is recognized by the World Health Organization (WHO) as “a major public health problem and a violation of women's human rights.” Domestic violence takes many forms, including physical, psycho-emotional, economic, sexual, cyber, harassment and stalking. Globally, one in three women has experienced violence, primarily at the hands of their partner. Furthermore, 38% of female homicide victims are killed by their male partners.

By partnering with women’s NGOs, ACTED Uzbekistan is targeting young audiences on social media to raise awareness of GBV, dispel stereotypes and engage a new generation in the fight for gender equality.

In the absence of national legislation outlawing domestic violence, survivors in Uzbekistan have long been left without legal protection for a crime that is still considered, culturally, to be a private matter. Moreover, policies related to women’s rights are still perceived to be unrelated to the country’s economic objectives, despite the high economic costs of missed work and healthcare for victims. As a result, Uzbek women remain vulnerable to domestic violence, economically disadvantage and excluded from decision-making processes, both locally and at the national level.

Dilfuza married at age 22 and had two children with her husband. When working abroad in Russia, she was sexually assaulted, resulting in pregnancy. Fearfully, Dilfuza returned home to Uzbekistan, where she tried to hide the pregnancy from her husband. Once the baby was born, however, she told him the truth about the assault, hoping for compassion and support. Instead, Dilfuza’s husband and his family threw her out of the house, leaving her and the newborn baby homeless.

Dilfuza was so full of despair that she considered suicide. She sought help from her local women’s committee, which sent her to the Oydin Nur Centre. Since 2000, the Oydin Nur Centre has provided psychological counselling to more than 5,155 women in crisis and provided support to the more than 9,000 women who dialled its hotline number. Dilfuza stayed in the Centre’s women’s shelter for several months, where she and her baby received housing, clothing, food and medical care.

Supported by a psychologist, a social worker and a lawyer, Dilfuza was also able to reconnect with her elder children. Centre staff helped the children understand GBV and their mother’s precarious situation. Her eldest son said no matter what, he wants to be with his mother. So, with the help of a lawyer at the Centre, Dilfuza applied to the civil court, which granted her permission to live at her husband’s house with all her children.

Women’s rights advocates and survivors of domestic violence in Uzbekistan saw the first signs of potential progress in 2016. A change in government ushered in a new openness to discussing gender-related issues. 210 women’s civil society organizations (CSOs) registered with the Ministry of Justice, only to be effectively blocked by administrative barriers and entrenched patriarchal biases. To holistically tackle the issues of gender inequality and GBV, ACTED’s gender programming in Uzbekistan has focused on the following issues:

Filling the service gap and acting for change 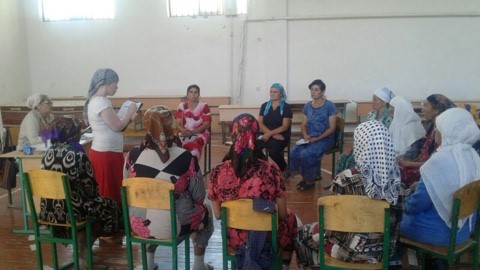 CSOs like the Oydin Nur Center save lives and rebuild families torn apart by violence. However, the viability of these essential support services is at risk due to a lack of regular sources of funding. Furthermore, the scope and reach of services offered are insufficient to meet the needs of GBV survivors across the country. Practically, this means that for survivors of GBV, access to supportive services is limited, and the services that do exist are underfunded.

To help fill the gap between what Uzbek women need and what civil society can currently provide, ACTED’s project will also target a total of 15 women CSOs to increase their institutional and organizational capacity and financial viability. ACTED will deliver trainings in management and fundraising for organisations delivering support services to women. Through these trainings, CSO staff will improve their managerial performance, develop a sustainable business plan and mobilize locally available resources as well as international grants.

Teams in Uzbekistan are also working to build awareness of domestic violence through digital campaigns. With support from the European Union, ACTED Uzbekistan produced a video to raise awareness of GBV and to tackle the stereotypes that perpetuate gender inequality.

Education for Health: promoting hygiene and access to water