In Uzbekistan, statistics about the prevalence of gender-based violence (GBV) are unavailable due to social taboos which prevent open discussion of the issue, making it difficult to assess the scale of the problem.

Yet, a lack of official statistics can’t hide reality. Since the Women’s Committee of Uzbekistan launched a GBV telephone ‘hotline’ in 2018, users have logged over 15,000 GBV-related complaints. During the first three months of 2019, over 4,120 women and girls were referred to support centres.

For this article we spoke to Nadira, a woman who came to the Oydin Nur Centre, 600 km from the Uzbek capital, Tashkent, which provides free provisional accommodation, medical, psychological, legal, social and legal assistance for women and families in need of help like Nadira.

Nadira was born in Bukhara, an ancient city in Uzbekistan. Her family moved to Moscow when she was only two years old.. Nadira’s mother worked in a beauty salon, while her father was a driver. When her brother was born, eight-year-old Nadira dropped out of school to support her family. She eventually reenrolled, but when her mother gave birth to her little sister four years ago, she again had to stay home to take care of the baby.

When she eventually went back to school, Nadira was two years older than her classmates. Aged 14, Nadira was taller than her peers and her skin had spots. Because of this, her classmates often bullied her. Instead of protecting her, some teachers asked Nadira why she didn’t study more  in class. Nadira’s determination to stand up for herself landed her in trouble with her teachers who threatened to report her to the police if she attempted to protect herself from the bullying. During this time, Nadira’s father passed away. 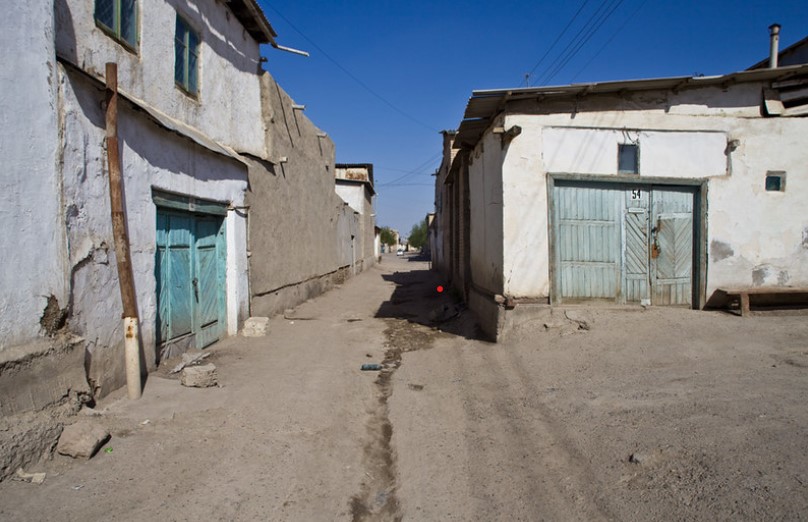 A street view of Bukhara, Uzbekistan

When Nadira’s father died, her mother was expecting her little sister. Not only did her mother have to endure pregnancy while experiencing tremendous grief, she was also diagnosed with gastrointestinal cancer at the time. By the end of the year, in 2019, she was no longer able to work and therefore pay for their housing in Moscow.

Nadira’s mother asked a driver she met to take them home to Bukhara. The whole trip took several winter days, first in cold snowy Russia and then in the Kazakh steppes. Nadira, her siblings and her mother spent the whole trip in the back of a truck. Nobody was expecting them in Bukhara: they had sold their house long ago. Yet at that moment, returning to her homeland seemed the best option.

After arriving, Nadira’s mother went to “Oydin Nur” straight away. For years, Bukharians have regarded the centre and its founder Mavluda Salikhova as the most ardent defenders of women in the region. From 2020, Nadira’s family lived in the The Oydin Nur Centre “, where a doctor visited her mother, revealing that she did not have cancer.

Nadira and her brother enrolled at a nearby school: for the first time, she realized that her peers could be kind and considerate. The children treated the oldest student in the class with delight and even some kind of reverence. She made new friends. Life was getting better.

Life is back on track

In February, Nadira’s mother got a job in Tashkent, rented an apartment for her children in Bukhara, and the family eventually left the shelter. Nadira got a job as a waitress in January and tried to combine her studies with work. The pay was low as she worked part-time as a student. To work more, Nadira began skipping classes. When the Covid-19 pandemic began, she abandoned school. For several months there was no work as restaurants were closed until the summer.

An unexpected surprise and the road back to “Oydin Nur”

At the end of June, Nadira  started to feel sick at her workplace. The cook gave her money to go to the doctor. The diagnosis was a shock to Nadira: she was 15 weeks pregnant.

The child’s father was 10 years older, and his family immediately opposed the relationship. The father then left for Russia, promising to support Nadira. While his support is for now limited to supportive text messages – Nadira is content. She says that she loves him and is ready to become his wife.

Meanwhile, because of the quarantine, Nadira’s mother could not pay her rent anymore, and at the end of October the landlady evicted eight-month pregnant Nadira together with her brother and sister.

For Bukharian women who find themselves this situation, all roads lead to “Oydin Nur.” Nadira and her siblings found a roof over their heads, and on November 7th, Nadira gave birth to little Durdona, who people nicknamed the ‘ Nadira is not afraid of motherhood; she already has vast experience raising infants.

Nadira’s mother was eventually diagnosed with fibroids and needed to go to Bukhara soon for urgent surgery. When “Oydin Nur” found out about her situation, they told her that the centre could pay for the treatment.

How Does “Oydin Nur” Work?

Mavluda Salikhova founded the Oydin Nur Center in 1999. Women from all over the region turned to her for help. In 2007, Mavluda opened a shelter so that women on the street could find temporary shelter. For several years, the center worked without funding, relying on donations and help from charitable individuals, religious organizations, former wards and their grown children.

To this day, as the shelter is a social organization; it does not have its own income. All the assistance provided is possible thanks to donor support. One of them is ACTED Uzbekistan who support the centre  with financial support through the ENGIE Foundation. ACTED’s project helps pay for the meals of those staying at the centre, partially finances the restoration of shelter, provision of support and delivery of social, medical, psychological and legal consultations

Education for Health: promoting hygiene and access to water