2,2 million conflict-affected people remain in need for humanitarian assistance in Ninewa Governorate in Iraq. This is the highest in number of returnees and IDPs, following the military operation to retake the area from ISIL.

The area has growing humanitarian needs, preventing internally displaced people to return to their homes. There is a lack of access to basic services as well as safety and security issues. In the area a great number of schools have been destroyed or damaged. Roads are in a poor state and medical facilities also endured damages from the conflict.

Through quick impact projects, ACTED builds back schools, roads and healthcare facilities. The rehabilitation of infrastructures is the first step to help returnees and internally displaced people build their life back. These rehabilitations were provided with the support of the CDCS of the French Minister of Foreign Affairs.

In Mosul, many schools were severely damaged during the liberation process. Asky Caravan School fell into disrepair before closing in 2016. Between January and February 2021, ACTED rehabilitated the school by carrying out earthworks, equipping and connecting water tanks to provide drinking water for children. ACTED also provided electricity, equipment and rehabilitated septic tanks, sanitary facilities, fences and gates. Thanks to the rehabilitations, the school has been able to relieve pressure from the other schools in the area. The school also adapted to the ongoing Covid-19 context by transferring 30 students from the old school, allowing students and teachers to adhere to social distancing measures.

Hawi Aslan School is one of the many schools in Ninewa governorate that was destroyed during the conflict, with temporary infrastructure set up to host students and continue education. ACTED supported the transfer of the caravan school to a safer and healthier area within the village by leveling the land, removing debris and providing safe drinking water and equipping sanitary facilities.

Hawi Aslan School was destroyed during the conflict.

ACTED rehabilitated the school and moved it to a safer location. 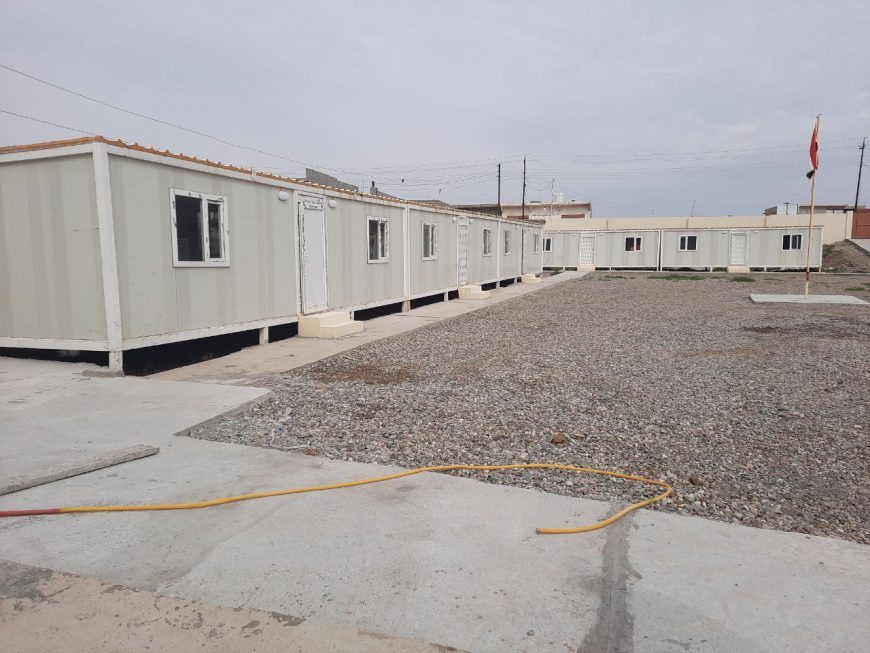 After ACTED's rehabilitation works and relocation.

Before the conflict, Al-Azaheer kindergarten hosted 300 children each year.  After ISIS took control of the west Mosul, the kindergarden was subjected to vandalism and misuse, preventing children to return even after it reopened in 2019.

ACTED rehabilitated the kindergarten by painting the inner and outer walls, installing air conditioners and rebuilding the sanitation facilities.

After ISIS took control of the area, the kindergarten was vandalized.

After ACTED's rehabilitaiton the school was ready to host its students.

The Hudaimiah Health Centre has been practically out of service since 2018 due to a lack of staff and medical equipment and general need for restoration to the building.  The health centre was in serious need of refurbishment and while it had a laboratory, it was lacking vital equipment such as centrifuge, microscope and refrigerators.

Hadhaymeah Health Centre before the intervention of ACTED

ACTED worked with the Electricity Directorate to provide a generator for the health center to ensure that critical medical treatments could continue despite frequent electricity cuts.

ACTED provided full laboratory necessary equipment such as a centrifuge and microscope, as well as a refrigerator to store medicines and vaccines. This intervention will benefit around 1,950 individuals in the area.

ACTED builds back roads after conflicts in West Mossul

After Bab Sinjar, a central street in West Mosul connecting a popular residential area to a school and kindergarten was hit by an air strike in 2015, the street was completely destroyed, including its infrastructure.

ACTED supplied the street with sewage pipes, which effectively reduced the flood rate. ACTED also paved the road for 300m and built a new sidewalk, providing a safe and accessible entrance for residents.

ACTED supplied the street with sewage pipes, which effectively reduced the flood rate. ACTED also paved the road for 300m and built a new sidewalk, providing a safe and accessible entrance for residents. Thanks to ACTED’s intervention, Bab Sinjar street is now paved and has a sidewalk, making it accessible to all residents.

Through this project, approximately 1,400 children are now able to walk to school or attend kindergarten safely on a hazard-free road.

Around 6,865 people of the surrounding area will access the new road and benefit from a safer environment, particularly female students who can now avoid the busier main street with a higher risk of traffic accidents. Finally, the new road also allows residents and women in particular to get fuel from the gas station opposite the street.

What Home Means: Despite what they lost, music is in their homes