The Consortium HELVETAS, ACTED and GIZ is implementing the project “National Water Resources Management” (NWRM) funded by Swiss Agency for Development and Cooperation (SDC). As part of the project, ACTED is responsible for the implementation of Result 6 “Watershed Management and Disaster Risk Reduction”, which aims to reduce the impact of water related disasters in the Ak-Suu watershed. Due to the magnitude and level of degradation occurring in the watershed, especially in its middle and upper zones, a series of farming, forestry, land reclamation and hydraulic engineering works has been implemented to reduce and prevent current threats of water related natural disasters. These are based on the findings from the comprehensive study of the AK-Suu watershed conducted by ACTED, which highlighted the current level of degradation of natural resources and provided concrete and practical recommendations for the restoration of the watershed. 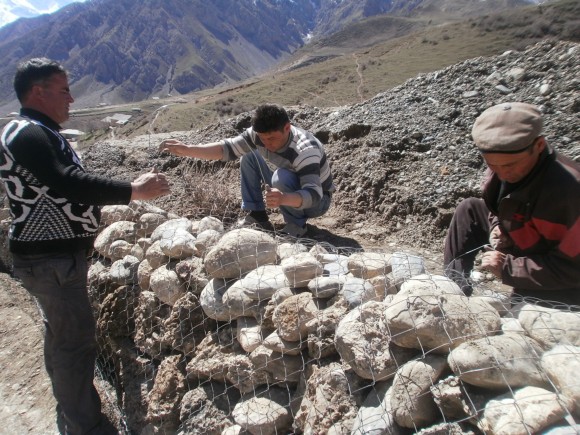 Bobuchak is a small rural mountainous village, located in the middle part of the Ak-Suu watershed (altitude-1799m) in Rosrovut Jamoat of Devashtich district. According to the results of the natural disaster risk assessment conducted in the village, Bobuchak can be consider as at high risk of disaster. In fact, it is highly vulnerable to mudflows, which every year cause damage to households, social facilities, and livestock. All in all, the village houses 513 people (117 households).

ACTED holistic approach aims to reduce the risk of disasters and build community preparedness through the integrated management of natural resources within the watershed. To this end, ACTED provided a series of training sessions to Community Members, involving them in restoration works as demonstration models, so that they could apply in practice the skills and knowledge received during the trainings. This allowed them to execute the mitigation activities planned for reducing the risk of disasters, using improvised inexpensive means. 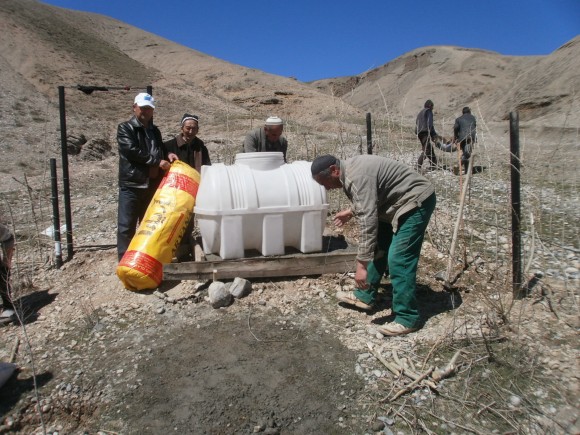 Conduction of restoration activities by population of Bobuchak village

In April 2016, the Bobuchak’s population decided to set-up a living palisade by planting native seedlings and shrubs such as tree elms and dog rose as a fence and by placing water tanks for their irrigation, due to the limited water available in the village. All the required works were executed by community members, using the means readily available in the village (stones, seedlings, shrubs, wire). Moreover, CBOs member set up a series of activities to involve school children in the gardening and watering of the seedlings. In this way children can observe the restoration process, and through the direct observation they can understand the root causes of mudflows and the irrational use of natural resources. In fact, due to the ongoing economic crisis in Tajikistan, the adult male population is often into labor migration and women are fully engaged in domestic work. As a result, teenagers are now the segment of the population which is more often responsible for cutting shrubs and trees, throwing away the garbage in the sai, leading grazing animal on pastures, without realizing the severe consequences of their actions.

Nonetheless, the measures implemented are still not sufficient to reduce the risk of mudflows in the village. Moreover, such interventions should be carried out on a year basis, because after mudflows rubbles tend to cover everything. There is more and more the need to restore and clean up the environment, without losing heart and without despair. Taking into account the wealth of data collected from the in-depth disaster risk assessment, ACTED decided to implement in August 2016 two additional mitigation projects in this village: “Bank protection” and “Rehabilitation of mud channel”. These have significantly reduced the risk of natural disasters for 109 households, schools, a medical center, as well as tea house and a mosque. The activities of the population of this small mountain village were taken into consideration by ACTED’s experts when selecting the sites for the implementation of mitigation projects.

It is extremely important to directly involve the local population in the process so that they can understand by doing the meaning of what is happening. Why do mudflows become worse every year in the village? What are the main reasons for their occurrence? What should be done to reduce disaster risk? Directly involving local population in the project implementation was pivotal for building the capacity of the community members in disaster risk reduction. So, women, the elderly, teenagers participate in the work. 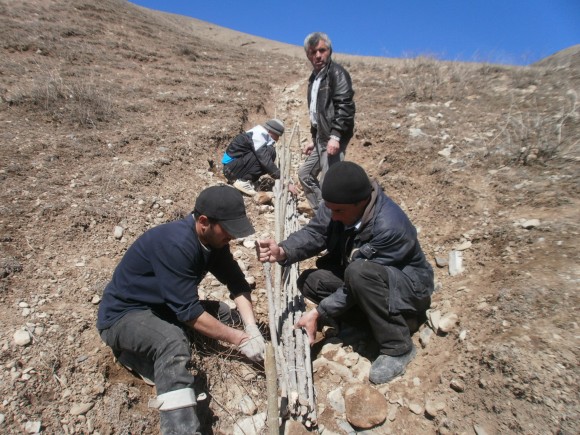 Conduction of restoration activities by population of Bobuchak village

Given the mountainous relief in the Ak-Suu River watershed, it is very difficult to divert a mudflow in the upper reaches of the village, which is particularly recommended for the implementation of mitigation sites. Here the technical possibilities are limited to the mountain area, where there are pastures. Members of the Pasture Committee discussed the issue for preserving the pasture areas where mudflows originate. Through preserving the pasture areas and other additional measures grass cover land can be restored and roots strengthened, consequently increasing water filtration and reducing runoffs of water, which will ultimately lead to a significant decrease of the frequency and intensity of mudflows.

By implementing integrated mitigation projects with restoration components in Bobuchak, ACTED not only aims to reduce the vulnerability of the people that live in Bobuchak, but also to provide an example and inspiration for the conduction of restoration activities in neighboring villages with similar or high risk of disaster.