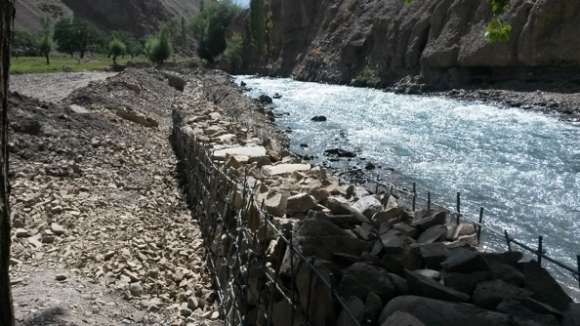 ©ACTED
An example of gabion construction across a river bank

One of the key areas of intervention of ACTED in Tajikistan is integrated natural resources management with a focus on climate change adaptation. Thanks to its long-term presence in the Zarafshan region, ACTED could react quickly to flooding and landslide risks last summer and implemented a START-funded anticipation project, which preserved communities from disasters.

The tremendous consequences that climate change is having on the planet are well known and visible worldwide. The poorest countries are usually the most exposed due to their geographical and socio-economic constraints, and Tajikistan is no exception.

The combination of early snow melting and abundant rainfalls, together with old infrastructures and poor land use practices, is having a devastating effect on the Tajik population. Due to the geographical location and to the lack of funding for prevention measures, mountainous areas, such as the Zarafshan Valley, are highly affected by natural disasters. Every year, flooding and landslides trouble the ordinary life of the local communities. Irrigated lands are often affected as well, impairing the agricultural production, which is at the heart of the local economy, thus putting communities’ livelihoods at risk and even leading to human casualties.

The higher than normal winter snow falls, combined with a hot summer, dramatically increased the risks of flooding. This critical situation was promptly noticed by ACTED, which advised for an immediate intervention.

The earlier, the better 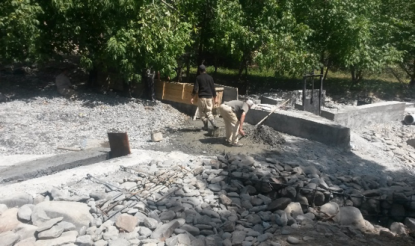 ©ACTED
Construction of a pool for water collection and a water gate for water level regulation, 2017

Within a few days, with the support of the START Fund, ACTED launched an intervention in areas assessed as being the most at risk of flooding and landslides, with two main objectives: on one side the promotion of disaster preparedness through trainings and awareness campaigns in order to make population aware of the procedures they should follow in case of an emergency; on the other side, the construction of mitigation works, such as gabions along rivers, to strengthen the embankment of the Zarafshan river to effectively prevent natural disasters to occur.

In August 2017, thanks to the construction of a water management infrastructure, 547 families living in the area were secured.

The population was actively involved in the implementation of the structural mitigation projects and received training on preparedness measures for flooding and landslide. The training sessions, involving 47 local leaders and representatives from community-based organisations from five communities, focused on disaster risk reduction issues, methods to decrease the impact of disasters and how to prepare Village Disaster Preparedness Plans based on hazard vulnerability assessments to be repeated every year. Direct involvement of communities and knowledge and skills transfer ensures a capacity to replicate best practices, and thus to build preparedness to reduce the impact of disasters and save lives.

Sustainable mitigation works: The use of gabions

As part of a wider EU-funded project on Improving livelihoods and food security through sustainable natural resource management led by Aga Khan Foundation, ACTED has been working in five communities since 2016. Using its extensive experience in natural resources management, ACTED for the first time introduced new sustainable mitigation methods based on the use of gabions to build up the preparedness of communities to anticipate flooding and landslides.

What you may not expect is that gabions are simply baskets filled with rocks and positioned along the riverbank. Sometimes the best solution comes from nature itself. A gabion is basically a cage of wire filled with rocks. In fact, rocks are easy to find and the construction of gabions does not imply neither complex technical skills nor very high costs. As a result, inhabitants from other villages around the areas of intervention, have come to see the new mitigation work and expressed their interest to replicate those methods in their community. But how can gabions prevent natural disasters? They protect from erosion and at the same time, being permeable, they are able to direct the flow of water. In this way, gabions have been proved to meet two important criteria: efficiency and sustainability.

The rapid intervention of ACTED, thanks to the swift financial support of the START Network combined with the involvement of the population into the project, provided with skills that can be used at any time without the need of an external support and ensured the successful anticipation of flooding and landslides. ACTED will continue, as part of the EU project in the region, to monitor the situation to further develop projects aimed at protecting communities from increasingly recurring natural disasters.