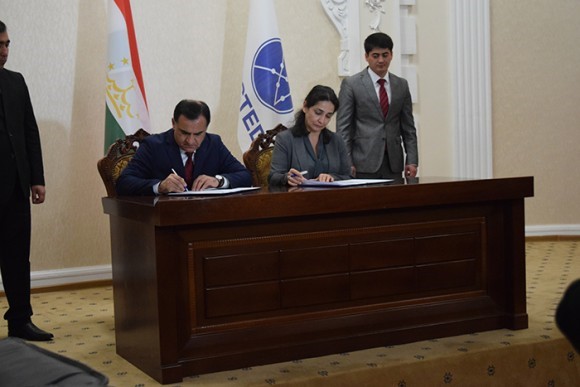 ©ACTED
The Head of CoES Rustam Nazarzoda and the Director of ACTED, Ms. Rano Mansurova, signing a Memorandum of Cooperation, 2017

One of the key areas of intervention of ACTED in Tajikistan is integrated natural resources management (NRM), with a particular focus on adaptation, and a long-term commitment to prevention projects to preserve communities from disasters. Natural water resource management (NWRM), a fundamental pillar of INMR, presents a peculiarity. Precisely, it is not limited to the borders of a country, especially in a region made of mountain ranges, valleys and watersheds that are divided between neighboring countries. ACTED now seeks to boost cross-border cooperation for effective disaster risk reduction by facilitating deeper dialogue between Tajikistan and Kyrgyzstan.

A joint effort to protect the population

On 10 November 2017, the Committee of Emergency Situations and Civil Defense (CoES), under the Government of the Republic of Tajikistan and the Ministry of Emergency Situations (MoES) of the Kyrgyz Republic, held its second joint meeting in Guliston, in the Northern Sughd region of Tajikistan, to discuss how to further improve cross-border cooperation for effective disaster reduction. The meeting, bringing together high-level officials from both countries including the Sughd region of Tajikistan and the Batken region of Kyrgyzstan, facilitated by ACTED, was marked by a recognition of the critical role that community based organisations and the private sector can play along national and local authorities to build up preparedness for natural disasters.

The ultimate objective of the event, which gathered 40 persons including media representatives from both countries, was to discuss the development and strengthening of bilateral cooperation between the Kyrgyz Republic and the Republic of Tajikistan to better protect populations and territories from transboundary emergencies.

The area between the Sughd Region of Tajikistan and the Batken Region of Kyrgyzstan was indeed recognized as particularly in need of a joint prevention and response strategy. An assessment conducted as part of the project revealed the high level of water-related risks in the two cross-border targeted watersheds namely Aksu and Khojibakirgan, such as mudflows and floods. The cross-border cooperation is aimed at ensuring that population in both countries can have access to the best prevention strategies and be fully prepared.

A fruitful cooperation between ACTED and CoES

In this context, a Memorandum of Cooperation was signed between the CoES of Tajikistan and ACTED, ensuring reinforcement of the collaboration mechanisms between the national authorities of both countries and ACTED in the field of prevention and evaluation of emergency situations.

It should be highlighted that both governments of Tajikistan and Kyrgyzstan are interested in the Disaster Risk Management (DRM) Community Based Organisations (CBOs) and intend to institutionalize it. This is all the more important as in Kyrgyzstan, a legal framework was approved in 2009 and the institutionalization process is ongoing. However, in Tajikistan, this process will be started, taking into account the lessons learned by Kyrgyzstan. 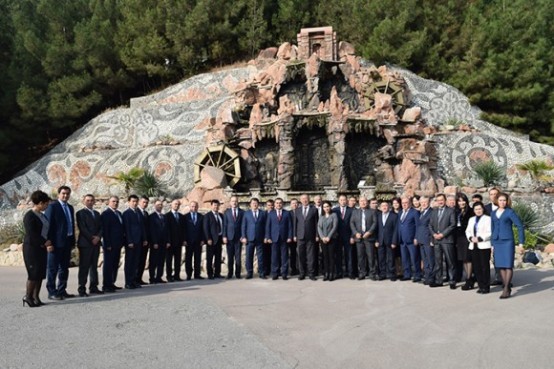 ©ACTED
Participants of the Second Joint Meeting of the Board at the Training center of the National Bank of Tadjikistan in Guliston town Sughd region, 2017

Two main aspects have been integrated into the Memorandum: One was related to the Institutionalization of DRM-CBOs created under EU-funded DIPECHO programme. In fact, Governments of Tajikistan and Kyrgyzstan have expressed their interest to institutionalize the Disaster Risk Management (DRM) Community Based Organisations (CBOs). In Kyrgyzstan, a legal framework was approved in 2009 and the institutionalization process is ongoing. In Tajikistan, this process will be started, taking into account the lessons learned by Kyrgyzstan.

The second aspect consisted in creating a link with Microfinance Institutions and the Private sector in order to enhance DRR and reduce vulnerability by increasing access of individuals and communities to different coping mechanisms, and enhance the role of the private sector in building resilience of the communities.

The dialogue focused mainly on issues related to the monitoring and forecasting of natural and man-made emergencies and the ways to overcome them in the two bordering regions. The concrete joint preventive measures and joint exercises on the development of cooperation in the area of joint rescue and search operations were also tackled.

Moreover, the delegates presented the concept of transboundary early warning system (EWS) in case of occurrence or threat of natural disasters in border areas of Sughd and Batken regions. One of the important components of the early warning system is the notification of relevant structures and individuals to take urgent operational response measures, including warning the population from the expected risk areas, possible evacuation and other preparation and response measures to avoid human casualties and minimize damage as much as possible. Within the framework of the SDC-funded NWRM project, the technical capabilities of the CoES of Sughd region were strengthened to enhance the EWS by installing the Drag-Net hardware and software complex capable of providing a multifunctional notification system. The voice alarm system allows to send timely messages over phone channels using analog and digital lines of communication.

The joint meeting was concluded by the signature of the summary of the meeting by the rescue agencies’ boards of both countries. The Protocol outlined the further development of synergies in other critical cross border areas in the field of prevention and elimination of emergency situations of a transboundary nature between the units of the CoES of Tajikistan in Lyakhsh district and border regions of GBAO with the relevant units of the Ministry of Emergency Situations of the neighboring country.