Since 2011, Libya has witnessed several waves of conflict, with episodic escalation across different regions.

The protracted conflict in Libya has led to a humanitarian emergency across the country. An estimated 1.3 million people are in need of humanitarian assistance of whom 35% are children, according to this year’s Humanitarian Needs Overview. That represents a 40% increase compared to 2020.

The conflict that occurred in Benghazi up until 2017 has had a particularly devastating impact on children. Many are exposed to severe protection risks including forced recruitment by militias and extremist groups, high levels of violence, urban combat, indiscriminate shelling and bombing, and unexploded ordnances. These traumatic experiences have substantially affected children’s physical, psychological and emotional health. In addition, children and their caregivers who returned to their original neighbourhoods are extremely vulnerable as these neighbourhoods are destroyed.

Although there has been a return to education following the end of conflict in Benghazi, the low quality of public education, the lack of social and extracurricular activities and open recreational spaces have hindered children’s personal and academic development. In addition, due to COVID-19, schools in Eastern Libya were closed from March to December 2020. As a result, children lost around 8 months of education and open recreational spaces.

To respond to the child protection needs identified, ACTED through its UNICEF- funded project implemented case management activities, awareness raising events on child protection, catch-up classes and trainings to child protection actors. Ali, Amira, Montaser and Amal  who are all between ages 9 and 12 were all part of ACTED’s project, their parents share with us how conflict and COVID-19 impacted their daily lives and how they recovered.

The heavy toll of Covid-19 on children

The COVID-19 pandemic has severe social, emotional and academic repercussions of children no matter the country. In Libya this was coupled by the effects of the conflict, particularly for children in Benghazi as the conflict ended in 2017.

For Fatima, her 7 yearold child Montaser “was constantly crying for no obvious reasons, to the extent that it became really unbearable on a daily basis. Even at school, his teachers would complain to me about him. He snapped back at teachers and didn’t have good relations with his fellow classmates. He was also crying a lot in class. I was completely at loss and did not know what to do to help Montaser feel better and stop crying all the time.”  And when COVID-19 hit Libya in early 2020, things got even worse. Montaser’s crying and aggressive attitude worsened as he was stuck at home while schools were closed.

Noran faced the same experience with her step- child Ali who had not seen his mother for several years. Since the separation of his parents, he has been living with his father and step-mother. Struggling with a sense of abandonment, Ali would often get very angry for no apparent reason. On top of that, when the COVID-19 outbreak hit Libya in March 2020, things got even worse.

The school was closed for an indefinite period of time, so Ali felt even more frustrated and angry, especially because he is a very good student, so not being able to go to school every day was a source of great frustration and disappointment for him.

For Amira and Amal, COVID-19 increased their anxiety and depression symptoms.

For many months, Amira suffered from severe pain in the ear. The pain was so intense that it disrupted many aspects of her life; she couldn’t sleep anymore, she felt dizzy all the time, and her hearing capacity was decreasing. After a while, Amira started to develop depression symptoms, she didn’t play with her siblings anymore because of the pain, and at some point she even refused to go to school because she was ashamed of her illness.

It was in early 2020, just before the beginning of the COVID-19 outbreak, we were about to go to a public hospital for Amira’s ear surgery. But all of a sudden, because of the pandemic, all public hospitals were closed, so the surgery couldn’t take place anymore. Only private hospitals remained open, but we couldn’t afford the cost of the surgery there.”

Amal has always been a shy and anxious child. But when the COVID-19 outbreak hit Libya and schools were closed for an indefinite period of time, Amal became even more anxious. Her mother Amina recalls, “She was bored, upset and very scared about the coronavirus, she was afraid of getting sick. I myself was quite nervous about this virus and the pandemic, so it was difficult to reassure her. On top of that, I was also very concerned about the school closure and the fact that Amal couldn’t get any education”.

After several months out of school because of the pandemic, Amal was already behind in Arabic. But her anxiety and lack of self-confidence at school, coupled with the fact that she hadn’t followed any class for several months, made her even more nervous about enrolling in catch-up classes. 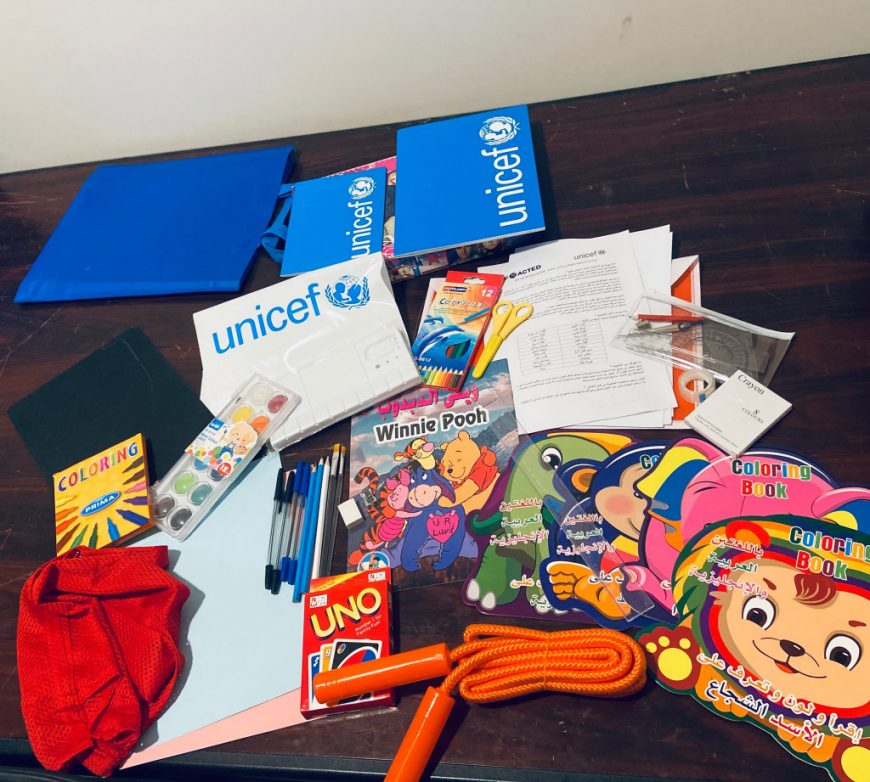 Ali suffered from a dermatological chronic illness and his parents could not afford the medical treatment. The case worker organised for the family to receive some financial assistance from ACTED to cover the costs of the needed surgery in a private hospital. A few weeks later, Amira came out of the hospital after a successful surgery.

Amal, was referred to Al-Safa Centre where she could participate in psychosocial support sessions that would help her to let go of her fears. With the continuous support of the psychosocial worker, Amal learned to understand and let go of her stress and anxiety about school and the coronavirus, and to develop her self-confidence. Because Amal did not have many educational and recreational items at home, she also received a PSS kit from ACTED, comprising various items such as coloring books and materials, puzzles and games, as well as stationeries.

Montaser was also referred to Al-Safa Centre to receive psychosocial support. With the continuous support of the psychosocial worker, he learned to express his feelings and emotions in a more positive manner, and got to talk openly about the reasons behind his difficult attitude towards his parents and teachers.

Ali, Amira, Montaser, Amal were part of the 90 vulnerable children who benefitted from case management services as part of the project Improved access of children to safe and inclusive learning environments through Bayti Child Resilience Centers. Through this program ACTED also rehabilitated different schools to facilitate access to education. Through its case management activities ACTED provided psychological support to families.