Over three years after the resurgence of conflict in Libya in 2014, Benghazi is relatively calm, with only sporadic outbreaks of violence. However, the crisis continues to take a heavy toll on families in situation of protracted displacement and crippled by the economic crisis.

Some however are worse off than others. Lacking better options or the means to rent, some displaced and even non-displaced families have been forced into cramped unfinished buildings, schools, makeshift houses made of scrap metal plates and plastic, abandoned company premises, and in some cases even tents.

In order to get a glimpse of the needs and challenges of the families living in these precarious situations across the city, ACTED visited Bodhema and Helis camps, Shouhada Bouzgheiba and Abubaker Alrazi Schools (collective shelters), as well as the Turkish company (informal settlement for non-displaced households) in January 2018.

Interviews with families in these areas highlight how vulnerable they are compared to the average family in Benghazi. They have less diverse and nutritious food consumption, much higher reliance on negative coping strategies (like reducing expenses on health and education), higher school dropout rates, and lower rates of receiving healthcare when in need. Despite this, they have often been untouched by the humanitarian response so far.

For a more detailed picture of the assessment findings, read the full report here and see the photostory by clicking on the picture below: 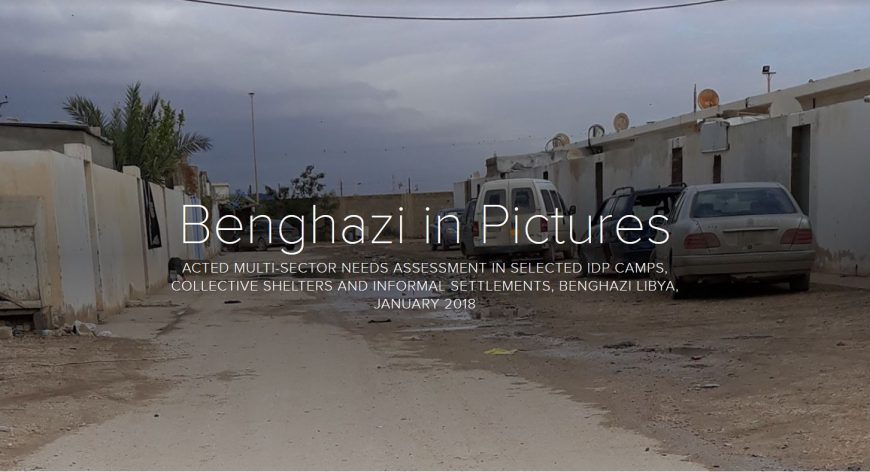 Cash programme for IDP and host community in Benghazi