Haiti, shaken back to ‘Year Zero’

At 4:53pm on 12th January 2010, a 7.3 magnitude earthquake struck central Haiti, transforming the capital, Port-au-Prince, and the surrounding towns into rubble. The words ‘Haiti, Year Zero’ were soon plastered across front pages around the world. At the time, approximately 3.5 million Haitians lived in the worst affected areas. Between 250 000 and 300 000 people lost their lives in the earthquake, with another 300 000 counted among the injured. The disaster levelled 80% of the Haitian capital with a similar impact in nearby towns like Léogâne.

100,000 homes were destroyed as well as essential infrastructure (schools, hospitals, the port of Port-au-Prince, etc.).

500,000 people displaced by the disaster

Given the scale of the destruction, with 15% of Haiti’s population affected, humanitarian actors initially struggled to fully coordinate the response. However, in the six months following the earthquake, one million of Haiti’s most vulnerable people benefited from emergency food aid and the reestablishment of access to basic services. 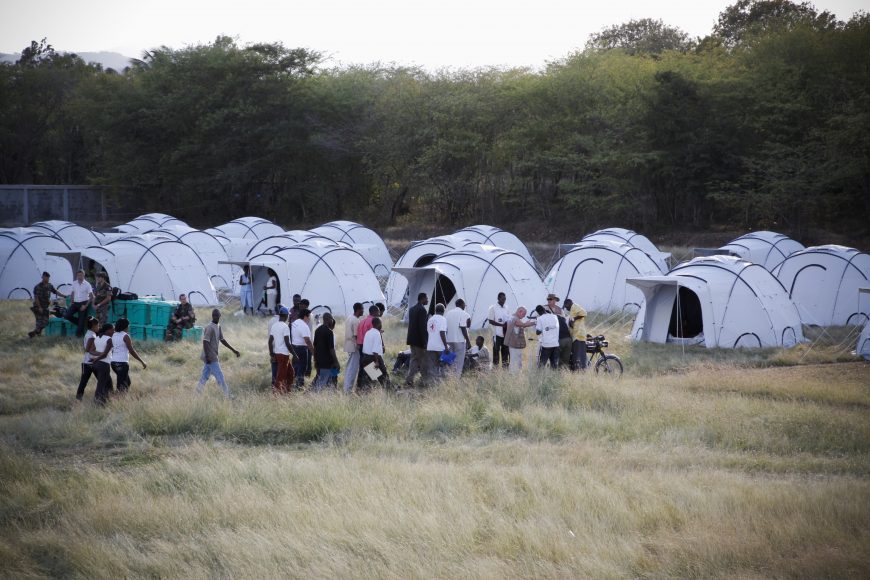 At the Pandiassou Reception Centre, the first displaced persons take possession of their tents

ACTED’s Response to the 2010 Emergency

ACTED, present in Haiti since 2004, was able to quickly mobilize a team of 250 people to intervene in each of the regions affected by the earthquake. In the first weeks, ACTED teams responded to the immediate emergency with food rations, drinking water, and basic necessities which included: mattresses, mosquito nets, kitchen kits, hygiene kits and plastic sheeting for emergency shelters.

The earthquake also created the perfect conditions for water-borne diseases to spread. For this reason, ACTED worked quickly to address the problems of hygiene and access to water in order to improve sanitary conditions. For those who had lost their homes, they had no other option but to take shelter in one of the many camps which sprang up in the wake of the disaster. These camps created their own health challenges, thus ACTED built 850 latrines, more than 400 showers and 40 tanks in the main camps of the country to provide more than 20,000 people with water. The organizations work to spread best practices in terms of good hygiene practices among those living in the camps also helped to prevent epidemics. In Leogane and Port-au-Prince, ACTED also took part in the management of IDP camps and built semi-permanent wooden shelters to offer decent living conditions to those who had lost everything. 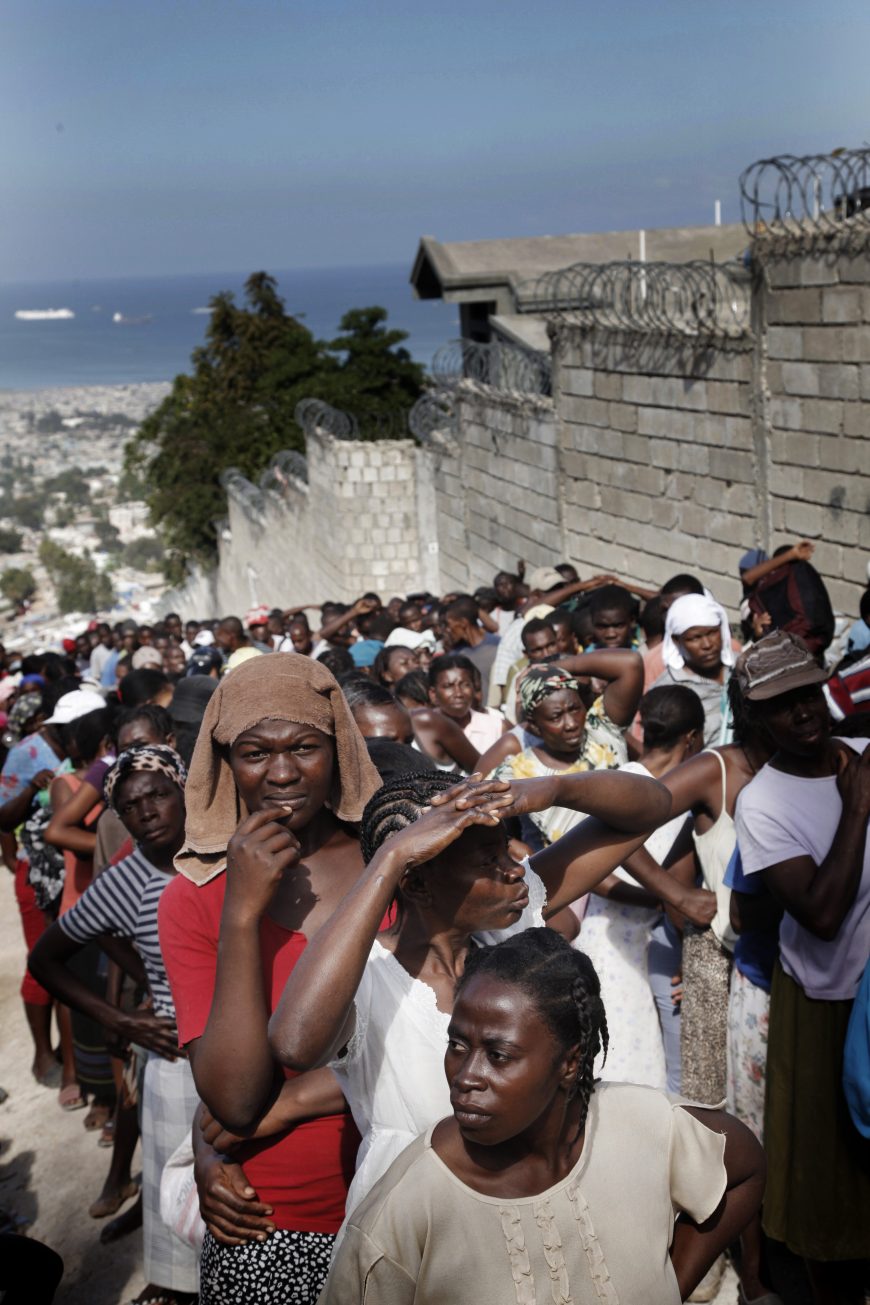 Throughout the intervention, ACTED ensured the participation of Haitians in the activities in order to make the most of available skills and experience, while also creating short term working opportunities for people whose livelihoods have been affected by the earthquake. More than 4,000 people took part in paid community work programmes to rehabilitate destroyed infrastructures, such as roads or irrigation canals. In the city of Léogâne, ACTED teams worked to re-establish a sustainable supply of clean water through the drilling of wells and the rehabilitation of water supply networks in earthquake-affected areas. Year after year, the projects have evolved towards development actions.

Ten years later, what are the achievements and challenges for better disaster risk management in Haiti? 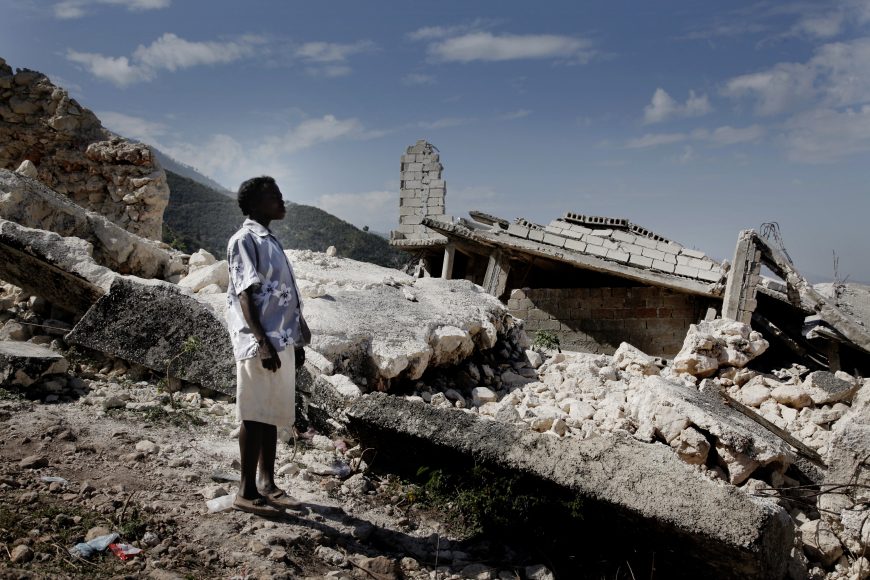 Haiti has witnessed socio-political upheaval and paralysis since mid-2018, complicating any real assessment of the impact of ten years of assistance.

Results appear very mixed: Due to the scale of the disaster but also the complexity and fragility of the Haitian context, reconstruction has proved long and difficult and international aid has been less effective than expected. In addition, the cholera epidemic that broke out at the end of 2010 and Hurricane Matthew in December 2016, created extremely difficult conditions for the Haitian state. In 2020, while cholera is on the verge of eradication, the humanitarian situation remains of great concern, with 3.6 million people in a situation of acute food insecurity.

In 2019, according to the Global Climate Risk Index, over the last 20 years[1], Haiti was among the top five countries which suffered worst from extreme weather events. This figure is indicative of the country’s vulnerability, especially since the number of such events is likely to increase as a result of the climate crisis. The events of the last ten years have proved that Haiti has low resilience to its existing level of exposure to extreme weather events, hence it clearly lacks the means to deal with events which go beyond the scope of those witnessed in the last decade.

However, ACTED continues to integrate disaster risk reduction components into its projects, such as in Grand’ Anse, southern Haiti, where the organisation is building 500 earthquake and cyclone-resistant houses. ACTED also conducts workshops to inform community leaders about disaster risks and identify priority needs in terms of infrastructure rehabilitation. The objective for the organization is to respond to today’s challenges while strengthening the long-term resilience of the populations. 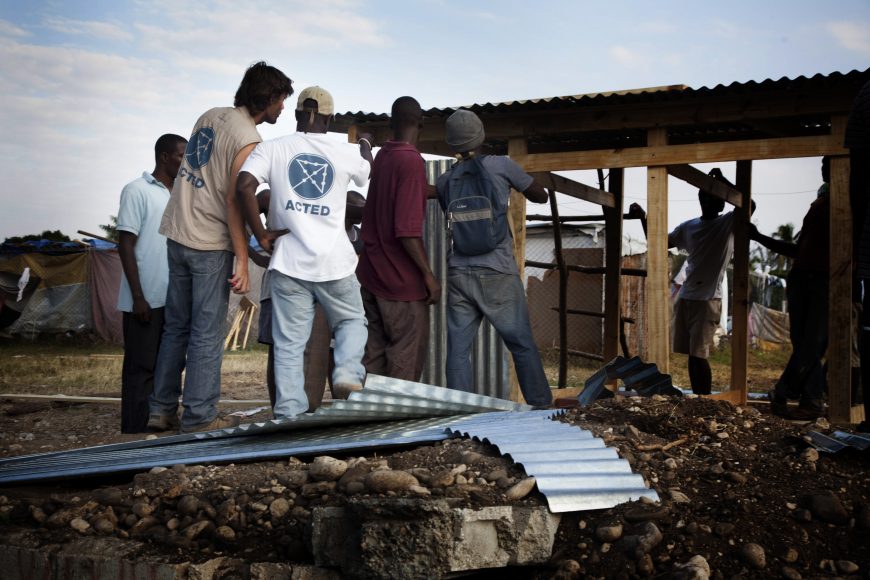 ACTED built five latrines in the IDP camp of Leogane stadium. Beneficiaries participated in the construction and were paid in "Cash for Work". 4,000 people were living in tents or tarpaulins in the Logan stadium following the earthquake.