In 2017, ACTED and local partner Arab Centre for Agriculture Development (ACAD) restored productive capacity and rehabilitated land for over 1,600 vulnerable farmers in the Gaza Strip

The 2014 Gaza war had significant consequences for the local agriculture. The loss of productive land and assets, coupled with a lack of financial capacity to cover production costs, led Gaza’s agricultural sector to decline by 31% from 2014. For the first time in 20 years, Gaza experienced a shortage of local fresh products. Nearly self-sufficient in fresh products before 2014, Gaza has become increasingly dependent on food imports. Since 2017, the ongoing electricity crisis, combined with increased lack of access to quality water resources, further weakened the agricultural sector in the Gaza Strip, exacerbating farmers’ vulnerabilities. 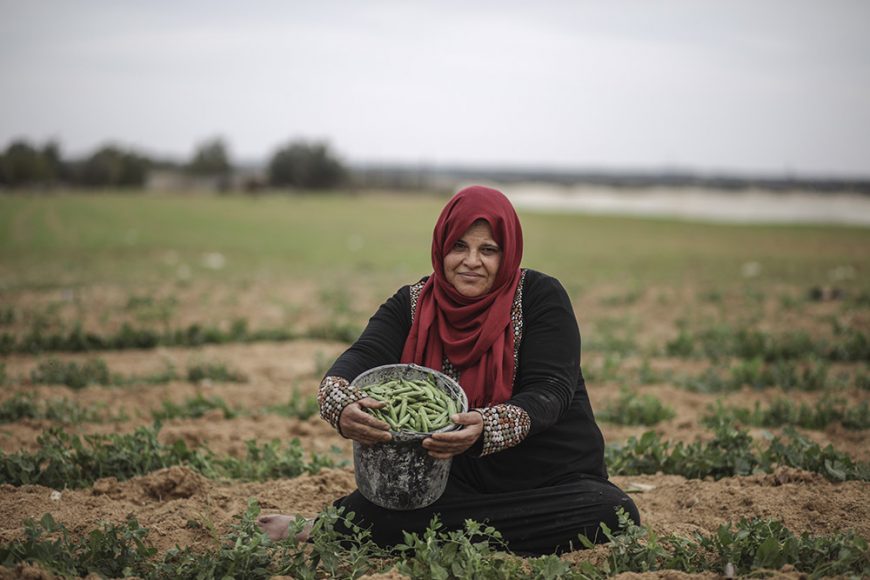 Hayat lives in Shokat as-Sufi, a vulnerable neighbourhood in the Rafah governorate, in the deep south of the Gaza Strip. Before 2014, Hayat was living in precarious conditions: because her husband is disabled, she was the sole breadwinner for her family of nine children, and she contracted numerous debts while struggling to cultivate her land. In the wake of the Gaza war, Hayat had just planted onions and spinach, hoping for good crops to clear her debt and feed her family.

The war forced her family to flee, hoping to return within a few days. Instead, when she returned to her land two months later, a grim spectacle was awaiting: water tanks, irrigation and electricity lines had been destroyed, and her crops had perished. ACTED helped Hayat rehabilitate her land, by building water carrying lines and providing seeds to cultivate new crops. Her lands are now flourishing with rows of fresh green peas, which she sells on the local market or uses to cook for her family.

1,695 farmers and their families were supported by ACTED and partner ACAD with the intervention.

Working for a better future in oPT

Gaza: ACTED’s Emergency Assistance for families to meet their needs

Bringing back water to farmers in Gaza