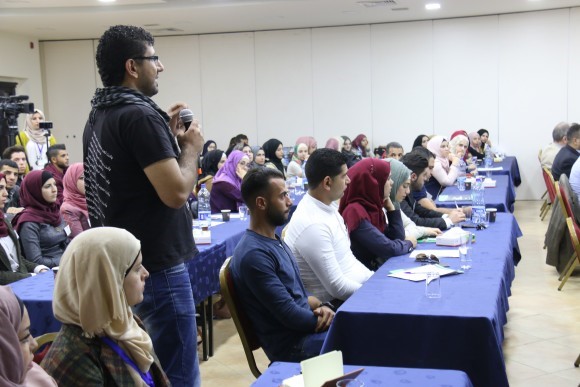 Averaging 21%, the Middle East has the highest youth unemployment in the world. The situation in the occupied Palestinian Territory is even direr, at almost double that average. From 2014 to 2017, ACTED and PYALARA worked to bridge the gap between education and employers’ expectations by organizing job fairs and providing internship and training opportunities for young graduates – an opportunity they embraced enthusiastically and with dedication. Under the umbrella of a regional EU-funded project to strengthen youth and female leadership in local and national decision-making processes, implemented in the occupied Palestinian Territory, Lebanon and Jordan, 750 young Palestinians from the West Bank and Gaza worked tirelessly to improve their chances in the labour market. 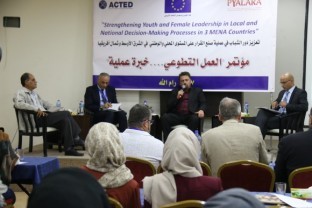 ©ACTED
A youth who participated in the project asks a question to panel members about women’s integration in the labour market, 2017

Over 150 young people, representatives from the European Union, and public, private and NGO sectors gathered on November 7th in Ramallah to celebrate the completion of ACTED and PYALARA’s project to fight Palestinian youth unemployment with the handing out of completion certificates, which marked the end of the project. The packed conference room of the Palestinian Red Crescent Society saw panel discussions, speeches, and even a rap song on employment issues by famous Palestinian rapper Vox Pop. The cheerful atmosphere reflected the positive experience of the participants of the project. Two thirds of the participants found jobs and internships in diverse fields, including IT, event management, banking and trade, as a result of the training they received. Mohammad, a young Palestinian, explains that he had lost hope of finding a job after completing his degree in electrical engineering in 2014, but after training at PYALARA’s employability center, his skills were matched to a job opportunity. He now works as an electrical engineer with the company he was matched with. The participants actively took part in discussion panels on how to strengthen female integration into the labour market, and debating on the needs for recognition of internships as a professional experience.

In addition to the young participants, the conference saw attendees and speakers from the European Union, the Ministry of Labour, key Palestinian universities, the Palestinian Chamber of Commerce and private sector actors. Together, they discussed the successes of the project, and highlighted the need for continued effort throughout all sectors in Palestine to increase active labour market participation among young Palestinians. 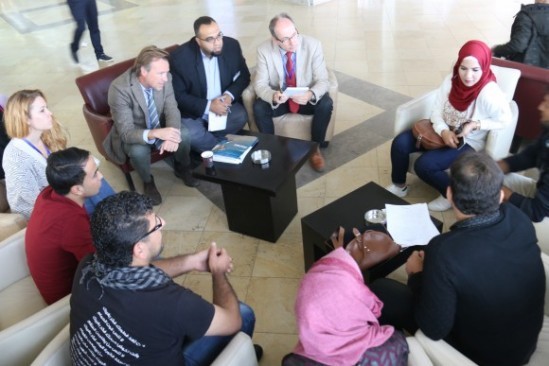 ©ACTED
Representatives from the EU, who funded the project, speak to several participants about their experiences, 2017

Working for a better future in oPT

Gaza: ACTED’s Emergency Assistance for families to meet their needs

Bringing back water to farmers in Gaza