18 January 2017 – Military operations to retake Mosul began on 17 October 2016 and resulted so far in the displacement of over 135,500 people in 3 months. Since 29 December 2016, the military offensive has intensified, causing over 9,000 people to flee the city in the space of four days and a 50% increase in the daily displacement rate, according to OCHA. The current humanitarian situation is expected to continue for the upcoming months. 144,500 people have been displaced by the conflict so far, and an additional displacement of up to 500,000 people is expected, causing new needs to arise, while existing ones will most likely be exacerbated, with winter coming and existing resources depleting.

In addition to displaced individuals residing either in emergency camps (79%) or host communities (12%), families who remained in recently retaken areas are also highly vulnerable, as buildings and infrastructures are damaged, services have been cut, supplies are irregular, and many areas are contaminated with explosive hazards.

Moreover, there are serious concerns regarding the humanitarian situation in the Western districts of Mosul and the Tel Afar corridor, which remains under ISIL control and is encircled by the military. Citizens residing in these areas cannot be accessed by humanitarian organisations.

The single largest humanitarian operation in the world in 2017

In a coordinated effort to address the needs arising from this complex emergency, the humanitarian community organized what has the potential to be the single largest humanitarian operation in the world in 2017.

Operating through flexible and mobile teams, ACTED’s activities aim to address needs in a timely manner and adapt to the dynamics of a rapidly changing humanitarian situation. As the conflict persists and displacement continues daily, ACTED teams are mobilised every day to respond to the emergency, building on the lessons learned from being one of the main humanitarian actors on the ground since the onset of the crisis.

Since October 2016, ACTED has participated in the Mosul humanitarian response, addressing camp coordination and camp management, child protection, education, shelter and non-food items, and water, hygiene and sanitation needs arising from the military operations in Ninewa governorate. ACTED is also one of the partner NGOs of the Rapid Response Mechanism (RRM). 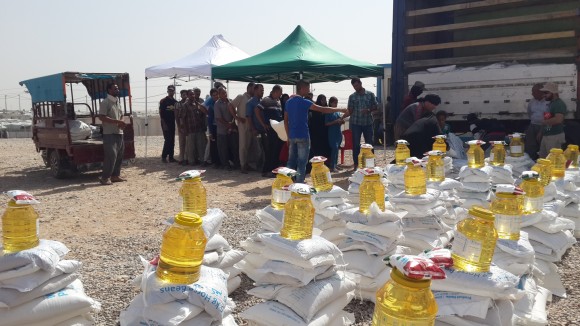 The Rapid Response Mechanism is an emergency response modality for delivering humanitarian aid to vulnerable people displaced in crisis, by ensuring that life-saving supplies reach people when they are most vulnerable - on the move, stuck at checkpoints, caught between frontlines and in hard to reach areas. After conducting rapid needs assessments to identify vulnerabilities, gaps, and list requests, ACTED teams deploy to provide emergency kits including ready-to-eat food rations, basic hygiene kits and water to last a family for one week. This process enables to gather timely and detailed knowledge about the local situation, and adapt the response accordingly.

Immediate efforts are currently focusing on providing life-saving assistance to highly vulnerable people living in newly retaken areas, so that they will not be forced to leave their homes on the look for access to food, water, and healthcare. The objective is to have an accelerated access strategy to reach highly vulnerable populations within 72 hours from the time of their displacement or after an area has been retaken. Such a strategy developed by the humanitarian community builds on the experience of previous operations in Ramadi and Fallujah.

Since the beginning of the military operations, ACTED RRM team distributed emergency kits to a total of almost 5,000 families, that is over 26,300 individuals, in both camp and non-camp settings in Ninewa and Dohuk governorates. Over half of the beneficiaries were reached in non-camp locations such as retaken villages or sites where displaced families were stranded at borders and checkpoints. The remaining of the beneficiaries (47%) were reached soon after arriving in Qaymawa (former Zelkan), Nargezilia, Garmawa, and Mamilian camps.

At the moment, 10 camps host displaced people fleeing conflict in Mosul, with relief organisations catering for their needs. As of today, six of these camps have reached full capacity, but an additional nine camps are planned or under construction, with an estimated capacity to host almost 250,000 more people. Most recently, ACTED has been supporting the opening of Narzigilia camp, where ACTED has been responsible for the registration of displaced people and tent allocation and advised camp management on the application of national camp coordination and camp management guidelines.

ACTED team is involved in camp coordination and camp management activities in formal camps. In Khazir camp, ACTED assists camp management in the creation of site maintenance committees that identify and carry out maintenance needs and activities, also prompting the establishment of distribution committees supporting distributions within the camp. We are also contributing to the setting up of joint-agency complaints feedback mechanism, with a pilote in Khazir U3 camp, with the intentions of spreading the system to all camps in Ninewa governorate. 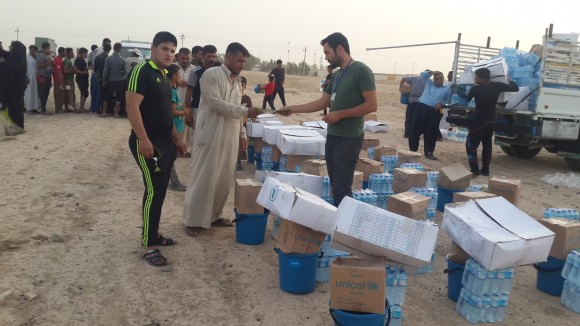 Displaced and conflict-affected households in non-camp settings are in need of items like clothing, heaters, fuel, and other articles for the winter, as well as appropriate and dignified shelter. ACTED mobile teams travel to retaken villages and have been delivering basic items and shelter kits to displaced people at unofficial reception centres, unfinished buildings, and informal settlements, reaching to date more than 4,500 individuals with life-saving non-food items assistance across 7 different locations of intervention. These include portable tents, emergency shelter rehabilitation materials, core relief, and essential seasonal appropriate items such as thermal mats, bed sheets, a kitchen set, gas cooking stove, and solar lanterns.

Water, sanitation and hygiene needs are to be addressed in priority to ensure populations have access to potable water and decent sanitation facilities in their areas of displacement, preserving the dignity of affected families while avoiding diseases and other affections due to unhealthy living environments.

ACTED is mobilized with water trucking activities the installation and rehabilitation of sanitation facilities and solid waste management.

In Mosul city, the needs in terms of water, hygiene and sanitation remain dire, as wells are running dry and turning black from over-abstraction. In February 2017, ACTED will start implementing WASH activities in newly retaken areas to address the immediate water, hygiene and sanitation needs observed on the ground, through the distribution of water and hygiene kits, water trucking and storage in tanks, rehabilitation of sanitation facilities and waste management activities.

Where markets are absent and people lack the means to provide for their families, ready-to-eat and monthly food rations are distributed complementing government assistance.

Children, together with elderly and disabled, are particularly vulnerable in such a context, and face family separation, gender-based violence, confiscation of legal documentation. Those are only some of the protection issues resulting from the conflict in Mosul. Beyond providing people with basic items and access to key services, ACTED is dedicating specific attention to the needs of youth and children, with tailor-made services as well as activities aimed at addressing the protection needs of children affected by life under ISIL and armed conflict.