Over the past three consecutive seasons, Somalia and Somaliland have experienced below-average rainfall. As a result, around 4.6 million Somalis experience a food security crisis in 66 out of 74 districts. As for Somaliland, actors on the ground report that many seasonal water sources have dried up and more than 1.2 million people are expected to be impacted by severe droughts in the coming months.

Thanks to the funds provided by the French Ambassy in Kenya, the Consortium Français pour les Urgences (COFRAU) partners composed of ACTED, Action Contre la Faim (ACF), and Secours Islamique France (SIF) provided cash assistance to hundreds of families. Through thre cycles of lifesaving mobile transfers in Sool, Sanaag, South West state, and Jubaland, ACTED and its partners helped people who were unable to afford enough food to eat.

Baidoa, a city located in the south of the country, has the highest number of new Internally Displaced People (IDPS) arrivals (26%) in Somalia, with an estimated 650,000 people affected by the drought. Droughts have had particularly destructive impacts on harvests, therefore the families that depend on agricultural labor and crop sales have seen their income dramatically reduced. In addition to crop losses, poor livestock body conditions and below-average milk production have caused them to be unable to meet their food needs.

Jubaland, a region located in the southwest of Somalia, is also one of the country’s worst drought-stricken regions, with almost 30,000 people affected. These people lack access to safe drinking water, sanitation, and thus are not able to implement better hygiene practices. Other families have joined other existing IDP camps in the region’s capital city, Kismayo, thereby putting pressure on social services. Besides, with 129,760 people in the Sool district alone, the average price of a 20-liter jerry-can of water has risen by 0.2 to 0.6 dollar.

At the same time in Las ‘Anod, Somaliland’s capital city, displaced communities are falling into severe food insecurity, exposed to disease outbreaks and malnutrition, with vulnerable populations such as women and children being disproportionately affected. 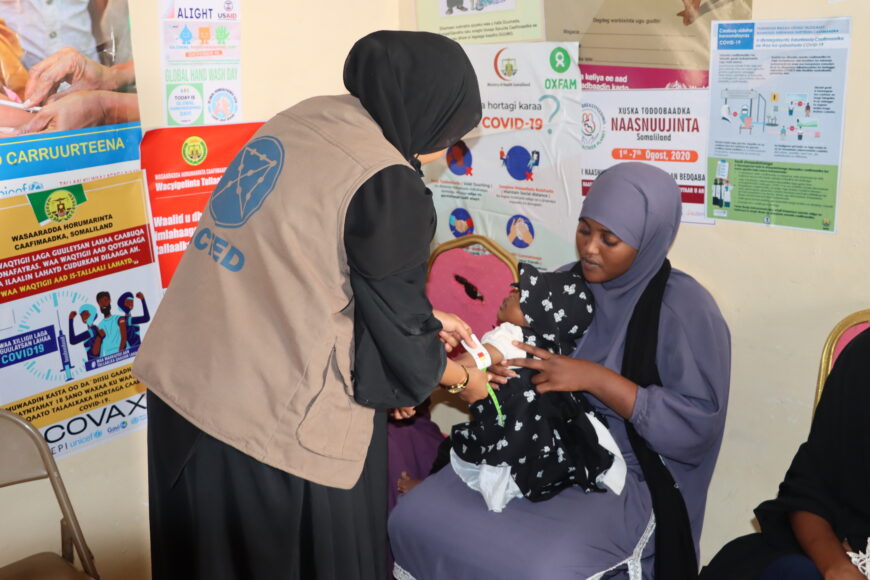 What is the MUAC?

The Mid-Upper Arm Circumference (MUAC) is a measurement used by health workers in order to determine whether a patient is malnourished. The tool used is a specific paper with a color-code on it, that allows to determine under which category the patient falls. The patient is not deemed malnoursihed when the girth of its arms falls within the green part of the band; yellow indicates a risk of malnutrition, and red means its level of malnutrition is critical and potentially mortal.

To help financially stressed families and reduce the impact of the drought, the COFRAU partners provided cash assistance and fresh food vouchers to 1,630 families in Las’Anod, Kismayo, Erigavo, and Baidoa. ACTED alone provided cash assistance to 380 families, which amounts to roughly 2,280 people. Furthermore, the COFRAU gave priority to families with pregnant and lactating women, as well as children under 2 years old and malnourished children. The aim of this operation was to improve both the access to food and the purchasing power of these families, with an emphasis on helping the most vulnerable categories of the population.

Though the intervention did not aim to cover all the communities’ needs, it had a positive impact on nutrition, food security and livelihoods. Many families were able to use the cash assistance to improve their immediate needs first, like food, basic shelter, primary or emergency health care. Then, they took care of other needs afterwards, like investments in livelihoods, secondary and tertiary health care, or less essential goods. In short, the intervention enabled those who were most vulnerable to meet their basic needs, while also increasing their purchasing power.

*For protection purpose, the name of the beneficiary has been changed.

Raha Ahmed Muse, 28, is a mother of three under-two-year-old children, two of which are twins. Despite her Oromo heritage, Las’Anod is now her home. She is one of thousands of Oromia people that fled to Somaliland from Ethiopia’s border in 2019.

Her husband used to be the breadwinner for their family, but he has recently been unable to work. Breastfeeding with twins was challenging for her since she could not afford enough food for her family and was malnourished herself. She received $85 in August 2022. She stated that she did not have to worry about food at all the previous month, as she received cash assistance and was able to purchase basics items for her home, such as milk. 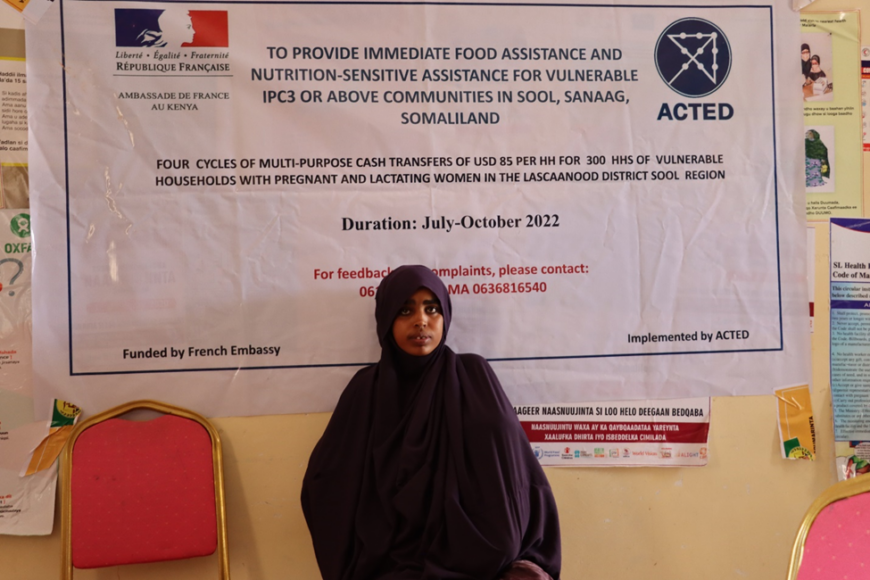 Raha Ahmed Muse, beneficiary of the 27-FBF project in Las'Anod

Her story is only one of the hundreds of people who have received aid from ACTED and its partners, thanks to the funds provided by the French Embassy in Kenya and Somalia. Hundreds of thousands of people’s lives in Somalia were impacted by the drought. Therefore, it is essential to ensure equitable basic service access as well as protection for the already vulnerable displaced population. Cash transfers were used in this project because they are more versatile: they give recipients both the freedom and enough purchasing power to take care of their and their families’ essential needs.