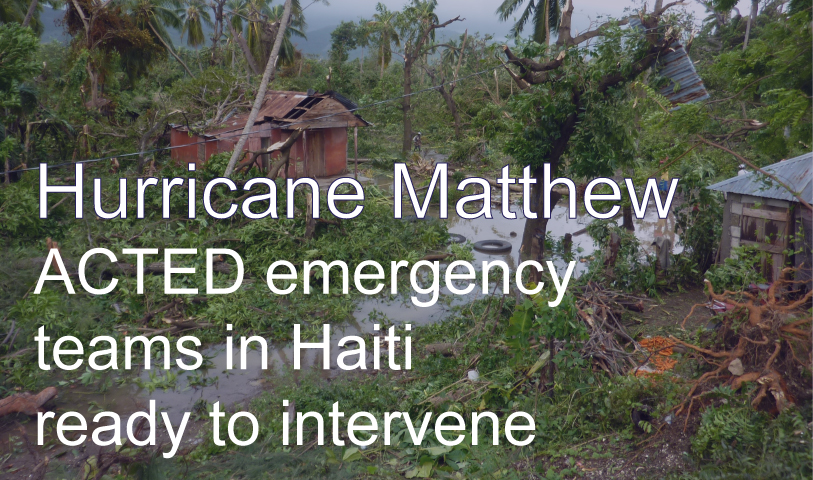 Situation update in the morning of October 7
Many areas of the Sud and Grand’Anse departments are still unacessible. ACTED undertook reconnaissance flights in the affected areas. 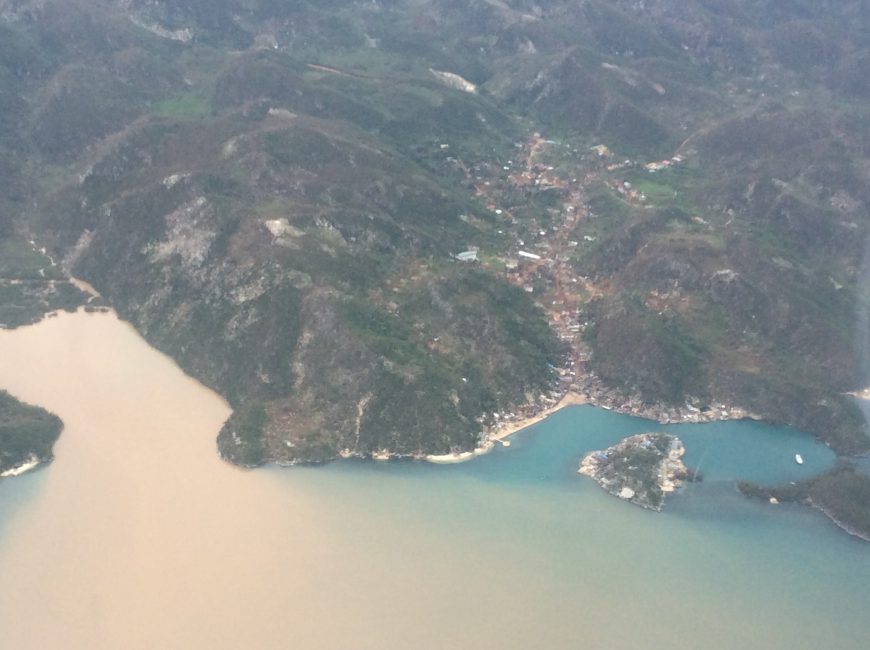 ©
An arial vue of the coast nearby Jérémie, in the Grand'Anse department, October, 2016 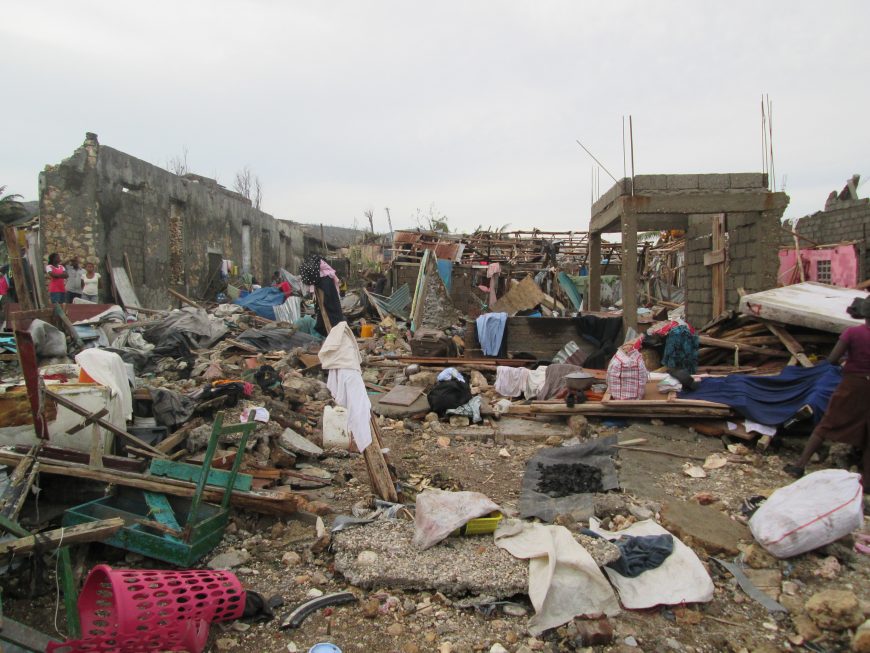 In the evening of October 3, 2016, Haiti’s southern tip was struck by Hurricane Matthew, a category 4 hurricane on the Saffir-Simpson Wind Scale. This has been the most violent hurricane in the past 10 years, and probably one of the most violent since hurricane Hazel in 1954, with average wind speed of 230km/h (145 mph) and three meters rise of sea level in some areas

Tropical storm Matthew developed on 28 September south-east of Saint Lucia, with 97 km/h winds, before turning into a hurricane on 29 September. Haiti was on red alert status since the night of 1 October – while schools, airports and other infrastructures had closed, 8 ACTED emergency and assessment mobile teams were pre-deployed in secured shelters on 7 sites along the coast of the Sud and Grand’Anse departments to be able to assess the damages after hurricane Matthew and launch emergency operations according to the needs. This enabled the teams to easily access the most affected areas, which remained isolated from the rest of the country due to landslides and floods. 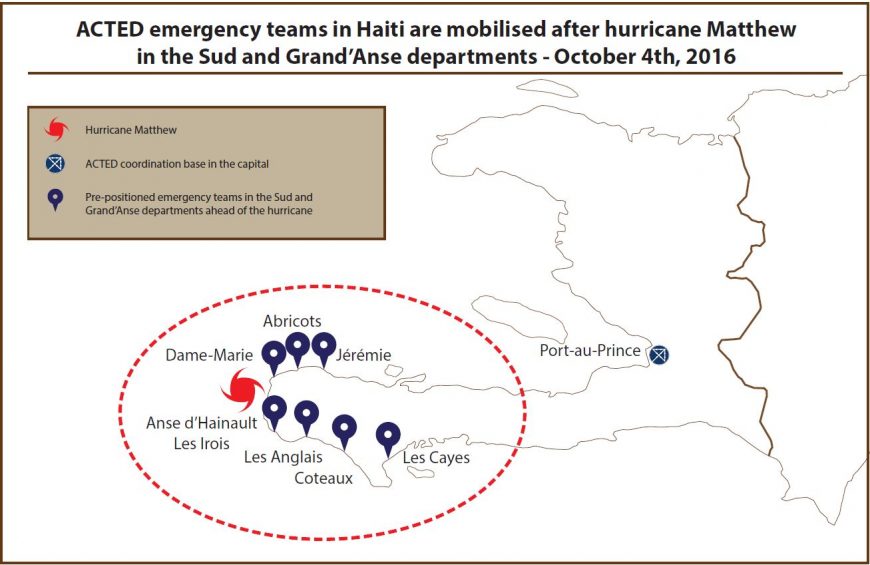 The southern peninsula is cut off

Ahead of the hurricane, concerns were already high, due to the power of the hurricane, that made human casualties and significant material damages seem unavoidable. On October 4, the hurricane was slowly moving off of Haiti, but heavy rains and thunderstorms continued, coupled with violent gusts of wind. The death toll on the morning of October 7 reached over 300. Violent winds and rains, severe floods and mudslides following the hurricane caused enormous damages in the Sud and Grand’Anse departments. According to Emilie Bernard, ACTED Country director in Haiti, “communications have been completely cut off with the southern peninsula. We have great difficulties in contacting our teams on the spot. Satellite phones allow us to get situation updates, but only very briefly. This is why we still lack information. But very clearly, the southern peninsula is cut off, both in communications and access routes, which were blocked by the storm.”

“The biggest challenges are first the death toll, which we are unable of evaluating at this point, then, the destruction of livelihoods and production, which is enormous”, she explains. On the following day, pictures taken during a reconnaissance flight on the coast of Sud and Grand’Anse departments confirmed the fears expressed about significant material damages. The scenes of destruction are worrisome: hundreds of homes are severely damaged, trees are uprooted, fields are flooded, and entire towns are unrecognisable and disaster-stricken. Rivers are swollen, roads are blocked and telecommunication networks are destroyed in all Grand’Anse department and in the western part of the Sud department. This is the initial damage assessment following Hurricane Matthew.

The road accesses to the Grand’Anse department and most of the road accesses to the Sud department are blocked by landslides and/or floods. A key bridge on the “nationale 2” road linking the southern peninsula to the rest of the country was destroyed in Petit-Goâve. An alternative pathway has been cleared to enable vehicles to go through until another solution is found. Prior to the hurricane, aid stocks had been already brought to the sites, allowing for an initial aid for 5,000 persons. But this is far too little. ACTED teams are now preparing to deliver emergency aid in the most hard-hit areas by air from Port-au-Prince, in close collaboration with other stakeholders on the ground.

In Camp Perrin, near Les Cayes, in the Sud Department, “the situation is worse than what can be imagined,” according to Thomas, a volunteer for Haiti Futur and our coordinator in the Sud department. “Trees have been uprooted, steel roofs have been snapped, and the Camp Perrin church saw its roof being snapped and its walls collapsing,” he added. “Homes, schools, everything is run-down. The road became a river.”

Assessment of damages and needs

To allow rapid intervention, collecting data is crucial. Data are collected through a rapid multisectoral evaluation form designed by the Rapid Assessment Multisectoral Team, coordinated by the Haitian Department of Civil Protection, UNOCHA and UNDP. Data is directly entered on tablets and smartphones to ensure they are processed, analysed and disseminated in near-real time to decision-making bodies in order to steer effective humanitarian interventions.

From the information we gather from our teams, who are dispersed in three different affected sites, the most urgent needs are clean water, food, and sanitation services for the populations of these areas. According to OCHA and local authorities, some 15,000 people took refuge in 152 temporary shelters in the affected areas. For ACTED, the management of these shelters is a priority in itself as the need for a humanitarian intervention is ever significant. ACTED teams are preparing to facilitate the clearance operations of roads and to distribute emergency kits to cover primary needs (blankets, hygiene kits, and water purification kits). Populations have no more access to drinking water and food stocks are very limited. Our team in Jérémie affirms that the clean water supply has been completely destroyed and energy has been cut off in the city. Same in Camp Perrin: “For the moment, we drink coconut water and boil the bananas that fell”, Thomas says.

Moreover, ACTED suspects that the heavy rainfall of the past days will create conditions that could facilitate the spread of water-borne diseases. The risk of new cholera outbreaks is ever real. The areas that were stricken are indeed among those most vulnerable to cholera in the south of Haiti. Ahead of the hurricane, in cooperation with the Haitian Civil Protection Department, ACTED teams conducted awareness sessions to prevent cholera, and prepare their intervention in case needed.

ACTED is one the leading organisations on the ground and has been present in Haiti since 2004, working with vulnerable populations. Working with civil society actors to fi fight cholera, as well as ameliorate water management and sanitation, ACTED teams know the populations on the grounds and are known to the populations themselves. Positioned at the heart of the disaster-stricken areas, ACTED teams’ spirits remain high and are working around the clock to do the best they could to assist vulnerable communities. A total of 35 staff members have been divided in 8 teams spread across Jérémie, Abricots, Dame-Marie, Anse d’Hainault – Les Irois, Les Anglais, Coteaux and les Cayes in the Sud Department and the Grand’Anse Department.