As the conflict in Yemen approaches the three-year mark, the humanitarian crisis continues to worsen. Nearly three million people have been forced to leave their homes, two million of whom remain displaced, according to the 2018 Humanitarian Needs Overview released by OCHA in December 2017.

Anwar, a 30-years-old father of 7, fled aggravated conflict in Taiz to find safety in Ibb governorate. With 63 shelters, Ibb governorate has the second highest number of collective shelters for internally displaced persons (IDPs) in Yemen, according to the Shelter Cluster. 50 of these collective shelters are schools, meaning education in these facilities has been disrupted. The host community is anxious for IDPs to vacate the premises so that children can resume their studies. 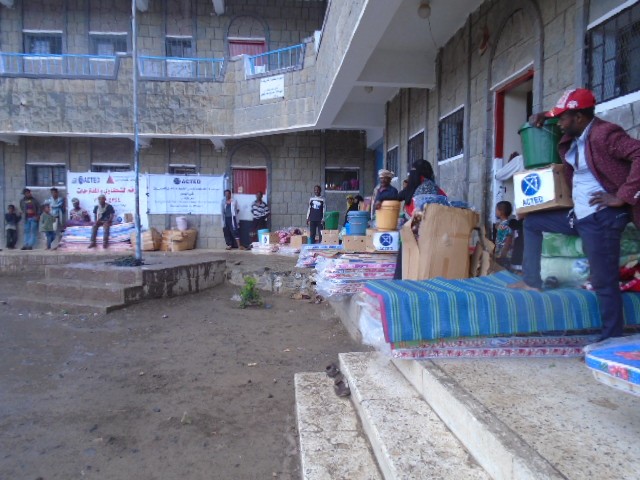 Anwar and his family have settled into such a school in Ibb. For the time being, he living in a classroom with his mother, his widow sister, her five children, his brother, and his brother’s family. 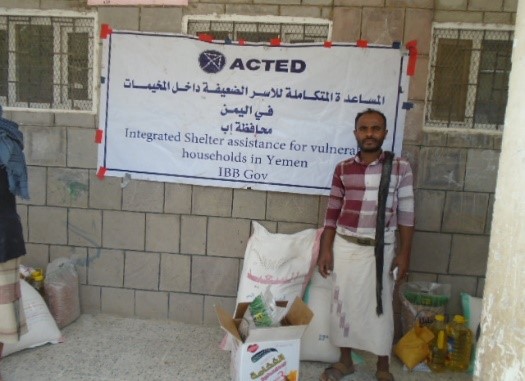 ACTED 2018
Anwar and other IDPS in the school received food baskets, among other forms of support.

“Living in a single room of a collective shelter is worrying and disquieting,” Anwa explained, sadly. “We cannot sleep quietly or use the bathrooms freely. There is no privacy.”

“In addition,” he continues, “fighting and conflicts occur daily with the other families living in the shelter, especially among children. Also, the school administration always blames IDPs that we are annoying the students and interrupting the education process.”

38-year-old Maha, a mother of 4, found herself facing the same challenges as Anwar after fleeing her home in the Taiz governorate, which was affected by incessant strikes in 2015.  Maha’s family fled to a safer area, but found themselves faced with difficulties and rejection from the host community. At the time, Maha read an advertisement on WhatsApp about a school in Ibb Governorate being open for all war-affected IDPs. She decided to move with her family into the shelter. When Maha first moved into the shelter, she found the other people to be cooperative and supportive, but with the passage of time, problems started to arise. She faced increasing hostilities from other IDPs as well as from the school’s teachers and students.

I dreamt of living with my family in a flat where I can feel safe and free.

Unfortunately, shortly after her arrival at the school-turned-shelter, Maha’s husband died and she became a widow. After the death of her husband, Maha’s situation in the school shelter became extremely sensitive. She faced a lot of social and psychological pressure from the host community. She had to take care of her children as both a father and a mother. The loss of her husband made Maha suffer a lot in order to be able to provide for her children’s basic needs. In the collective shelter, Maha lacked privacy and suffered every time she had to leave her room.

In March 2016, ACTED completed a comprehensive assessment in Ibb which revealed that large families often inhabit small spaces, lacked mattresses and shared blankets, and were without essential cooking and cleaning materials. Access to clean water and soap was limited, whilst washing and sanitation facilities were non-existent or non-functional.

Since January 2017, ACTED, with support from Yemen Humanitarian Fund (YHF), implemented an integrated shelter assistance program to reduce the vulnerability of almost 75,000 vulnerable people across five governorates in Yemen. The project aimed to provide families with the security of safe shelters so that they might spend their limited resources on other needs. To achieve this goal, ACTED took a shelter-focused approach, providing alternative shelter solutions, non-food items, shelter contingency stocks and winterization assistance.

From Displacement to Stability

Following discussions with beneficiaries to understand what would be their preferred choice to relocate from the collective shelter, ACTED provided four options for relocation:

ACTED teams engaged in focused group discussions with each beneficiary family wherein each option was explained and processes and procedures were detailed. Anwar decided that the most suitable alternative for him was to leave the shelter and rent a house with ACTED’s support through 10 months of rental subsidies.

ACTED provided Anwar with a bus for his family members and track for their lump sum. ACTED also supported Anwar’s family with 6 food baskets and non-food items, including enough blanket and mattress for each family member to face the cold of winter. They also received hygiene kits and water filters along with training on correct and positive health behaviors and hygiene practices.

Maha chose rental subsidies with 10 months of support from ACTED. ACTED provided Maha with bus for her family members and a truck to transport their belongings to their new home. ACTED also supported them with 6 food baskets and non-food items including a blanket and mattress for each member of the family to face the cold of winter. Maha also received a hygiene kit and water filters along with hygiene promotion training. 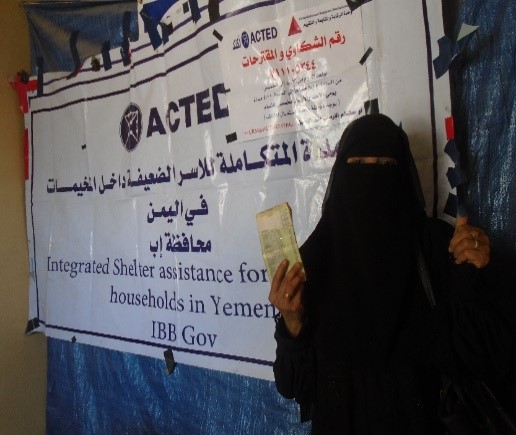 The classrooms where Anwar, Maha and their families were living have now been completely vacated and returned to the education office. Classes can now resume as IPDs settle into their new shelters.

As part of the project, ACTED also visited many families who had settled in an open area to assess their situation and provide them with assistance. Ahmad and his family fled Taiz along with three other families, staying temporarily in Al Hudaydah city before moving to Ibb city. The four families settled into one house consisting of three rooms, a bathroom and a kitchen. With the passage of time, the homeowner dismissed them from the house because they could not pay the rent.

Finding no one to open his home to them, all four families became homeless. They found a small portion of land where they gathered wood and tent sheets to set up tents for protection. Though they set up tents, the weather was extremely cold and they lacked enough blankets and mattresses to be comfortable during the rainy season. 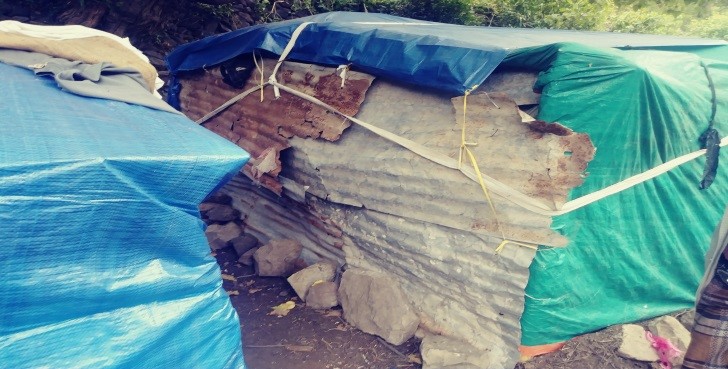 ACTED 2018
Ahmad’s family finds temporary shelter in a tent that he built from gathering woods and plastic sheet to be their shelter.

We suffer a lot because of the rain and the cold weather. So, at night, each family member sleeps with each other in order to keep ourselves warm, but we still feel cold. Our children are always sick and have flu. We are in a miserable situation

When ACTED team learned about the situation of these four families, they made a field visit and assessed their situation.

“ACTED supported us with blankets, mattresses, sleeping matts, buckets and kitchen tools for each family,” Ahmad said. “This saved us.”