The crisis in Yemen, the largest in the world, is a perfect storm of humanitarian, protection and economic crises with each fuelling the other. For two years, Yemen has been devastated by a bloody war, killing at least 7,600 people and injuring close to 42,000*.

This is the result of two years of conflict escalation

Even before the escalation of conflict, Yemen had 10.6 million people going hungry***, and one of the highest malnutrition rates in the world.

Following 24 months of airstrikes and fighting, the number of food-insecure people has increased by 60 percent and jumped by three million over the past nine months according to the latest IPC analysis on Yemen. Now an estimated 17 million people are food insecure, this includes 6.8 million people who are severely food insecure (or who do not know where their next meal will come from). They are one step away from famine.

he war has forced over 3 million people out of their homes. Because of airstrikes or fighting, thousands of families had no option but to flee and leave everything they owned behind them.

Crowded in camps or hosted by local communities, IDPs are among the most vulnerable people in Yemen. The majority have no source of income and they are highly food insecure.

At least 1,564 children have been killed and 2,450 wounded since the start of the conflict according to UNICEF. There were also at least 1,572 verified cases of child recruitment, resulting in children forced into more active roles in combat and manning checkpoints, including on front lines. These verified cases are considered to be just the tip of the iceberg. 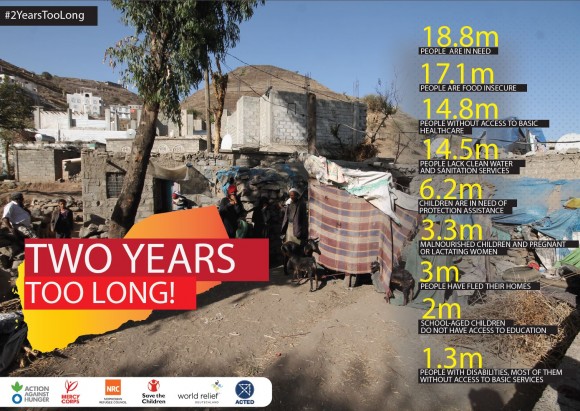 Children’s futures are also in jeopardy with approximately 2 million currently unable to access education. Displaced children are particularly vulnerable and today over half a million internally displaced children are out of school due to a lack of school certificates and/or their family’s inability to pay indirect education costs such as transportation, uniforms, books and other school materials. Attacks on schools and education facilities are also a factor hindering children in Yemen from accessing education. Between March 2015 and January 2017, there have been over 200 verified attacks on schools and about 2,200, or 14 percent of schools in Yemen, have been affected since the conflict escalated: damaged by bombs and ground fighting, used as shelters for internally displaced people or occupied by armed groups.

Child mortality has risen by nearly 20 % since the conflict escalated. At least one child dies every ten minutes from preventable causes such as diarrhea, malnutrition and respiratory tract infections.

Even those who escape injury or illness are deeply affected. Thousands of children are dealing with traumatic experiences which will undoubtedly have a detrimental effect on their mental health in the short and long-term. Hundreds have seen friends and families injured or killed.

Harsh living conditions and a crippled health system has had catastrophic implications for Yemen’s sick. The impact of the war has had particularly acute consequences for vulnerable groups such as pregnant women, newborn babies and young children. Today in Yemen easily treatable diseases can become a death sentence.

An estimated 14.8 million people now lack access to basic healthcare, including 8.8 million living in severely under-served areas. As of October 2016, at least 274 health facilities had been damaged or destroyed in the conflict, 13 health workers had been killed and 31 injured. Medical materials are in chronically short supply, and only 45 per cent of health facilities are functional. Most are doing so at a reduced capacity. 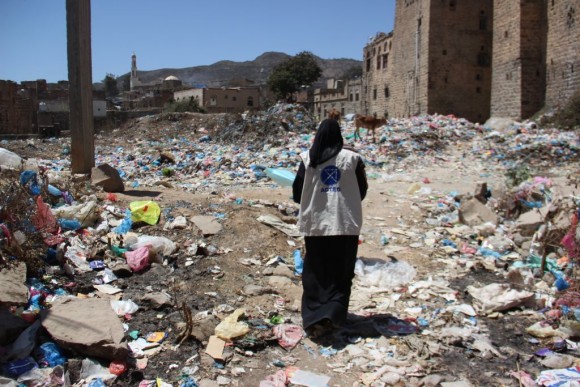 Employees of the Yemeni Ministry of Public Health, along with most government staff, have not been paid in 6 months, and most of the 1,200 foreign health practitioners present in Yemen before March 2015 have left the country due to insecurity. This, together with the blatant disregard for International Humanitarian Law by all parties to the conflict are two major impediments to the delivery of health care and overall significant elements of the crisis.

Children’s lives are on the line before they are even born. Women face huge difficulties in accessing antenatal, delivery and postnatal care, including a lack of ambulances, few female hospital staff, and frequent checkpoints and roadblocks encountered on way to hospitals.

Deadly diseases like cholera, measles and dengue fever are on the rise and children, many of whom are increasingly vulnerable due to a lack of food, are paying the highest price.

Fragmentation of authorities and unclear chains of command mean that NGOs often have to negotiate access at national level and then repeat the process at local level, delaying the delivery of vital assistance to people in need. Restrictions and delays in granting permissions for INGO visas, travel, training workshops and other standard activities are common. In some areas, air strikes and ground fighting are regular obstacles to aid delivery.

Of growing concern is the air and sea blockade imposed on Yemen; the country imports 90% of its food and imports are not coming in at the rate needed due to persistent delays and restrictions. The resulting scarcity of imports is pushing up prices, so ordinary Yemenis cannot afford to buy the food that is available. Humanitarian organisations can only cover a fraction of the needs. 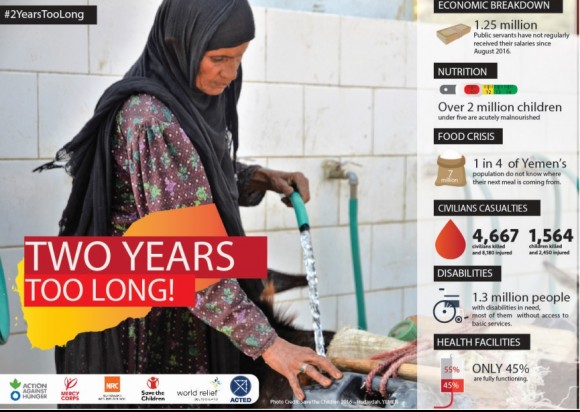 There is now a strong likelihood that ongoing ground fighting on the west coast will reach the country’s main port, Al Hodaydah, potentially cutting the port off from the rest of the country. With the country on the brink of famine, this will have devastating consequences.

The continued closure of Sanaa Airport to commercial flights means much-needed medicines are not being imported in the quantities needed, and that Yemenis in the north of the country cannot leave to seek medical treatment abroad.

Only 60 per cent of the $1.6 billion requirement, amounting to $977 million was received for the 2016 Humanitarian Response Plan.

The 2017 Plan for the Humanitarian Response was launched in Geneva on 8 February 2017 and the appeal requires $2.1 billion to target 12 million people. As of 15 March it is 7.4 per cent funded at 154 million USD. A Donor Pledging Conference is organised for April 25 in Geneva.

While the humanitarian response must be scaled up and protection of civilians prioritized, these will not address the underlying drivers of the conflict.

The only lasting solution for this situation is to put an end to the conflict. Warring parties must go back to the negotiating table. An immediate and effective ceasefire and durable political solution is needed to stop the violence against children, women and their families and to let aid agencies do their jobs in safety.

It is necessary that any peace agreement provides a meaningful political solution, which involves all sections of society, including women, youth and marginalised communities.

ACTED supports the revival of civil society in Yemen