The situation in Yemen is considered one of the worst humanitarian crises in the world as a result of the ongoing conflict, which has increased internal displacement, food insecurity, localized epidemics, and a shortage of key essential services.

In coordination with the Yemen Displacement Response (YDR) consortium, ACTED is implementing activities in IDP hosting sites to respond to displacement-related needs. ACTED is engaged in a full range of Camp Coordination & Camp Management activities under this Yemen Humanitarian Fund (YHF) supported project. One of the activities carried out aims at increasing IDP resilience and helping them develop sustainable livelihoods in Al Dhalee and Aden, Yemen.

Under this project, ACTED has conducted several community-based projects, which respond to the needs identified by the displaced populations themselves. ACTED organizes Focus Group Discussions with the IDPs to encourage them to advocate for themselves, their needs and their interests. For example, ACTED has organized livelihoods trainings where the IDPs can choose the sector they are interested in learning about (plumbing, sewing, hairdressing, carpentry, making incense, etc.).

The trainings teach IDPs the basics of running a small business and develop their hard skills for their respective trades. These livelihoods can provide income, develop the communities, build networks among vulnerable communities, and reestablish positive coping mechanisms. The livelihoods training activities targeted eighty families residing in five camps under this YHF-funded project.

Om Builds a New Business after Displacement in Yemen

Through the support from the Yemen Humanitarian Fund (YHF), ACTED, together with its partners, is responding to the needs of the Internally Displaced People (IDPs) living in the camps in Aden.

Om is one of the IDPs who have benefited from these trainings. “I participated in the incense-making training conducted by ACTED. This opportunity sharpened my skills in making better incense and in using materials and resources to build my own small business. Since the training, I have started selling incense to other IDPs in the camp which has enabled me and my family to meet some of our basic needs”.

“This training has given me the chance to feed my two children and my husband and improve my life by doing something I love!“ 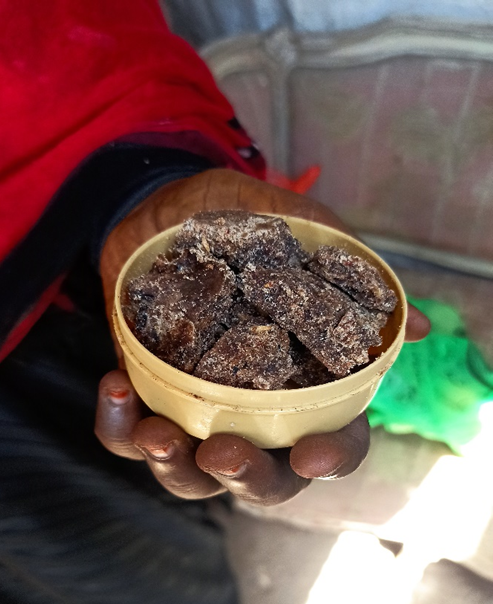 Om displaying the incense she learned to make in Aden, Yemen.

One of the IDP camps managed by ACTED is the As Sa’eed Educational Center, where Sara* lives. Sara is a 28-year-old head of household, caring for her chronically ill father and mother, who have been displaced due to their proximity to the conflict frontlines. She is also one of the six successful graduates of the sewing training. Sara was very enthusiastic about taking part in the trainings and has been practicing her new trade tirelessly.

At the end of the training modules, Sara received a sewing machine to start her business. Since then, she has started sewing her own clothes which reflect her own unique style and love for the craft. At first, Sara found it difficult to afford new fabric for sewing, so she came up with an ingenious solution She bought cheap old clothes and rejuvenated the designs to make new garments. Sara told ACTED staff that she is proud to earn an income, and that her family is now more stable than before.

“Thank you ACTED for such a useful training. It has helped me a lot to generate income to help my sick parents.” 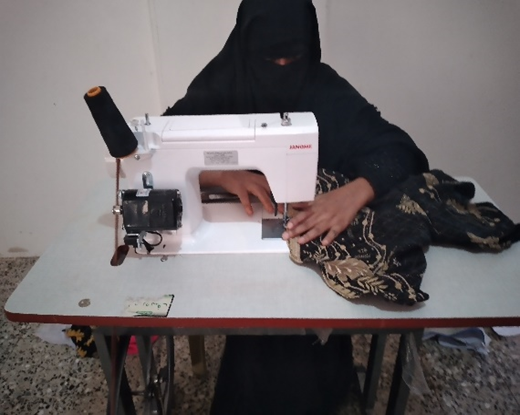 Sara sewing a new design in her home.

Nabil Can Revive his Painting Business

The Naqil Ash-Shaim-1 IDP camp in Qa’taba district, Al Dhalee, Yemen, hosts 243 displaced people who have fled violence. The IDPs residing in the camp have lost most of their belongings and have no possibility to earn an income that would stabilize their lives. ACTED has organized livelihoods trainings in the camp, during which beneficiaries choose the job and skills they would like to learn to build a better future. ACTED has also provided newly trained and veteran business owners the equipment needed to establish or reestablish their livelihoods. By providing the basic tools and kits, ACTED can revitalize entire sectors in the camps and host communities while creating sustainable change in a cost-effective and personalized manner.

Nabil*, a painter living in this site, told ACTED his story.

“I have been working as a painter for many years in the Qa’taba district. I worked hard to provide for my family, even though I faced many obstacles and difficulties. I didn’t have the necessary tools for my job, such as air compressors and scaffolding. I had to rent them, which was expensive. Sometimes I couldn’t afford to rent them, so I missed opportunities to work, which affected my business. I was left with no choice but to do the work manually, which required a lot of time and effort. This work was too physically demanding, so I had to stop.  Fortunately, the ACTED team visited our site, and we discussed my situation. I told them that I needed an air compressor and a scaffold. Then one day I saw two white cars coming towards me. I could not believe my eyes when I saw a scaffold attached to one of the cars. At first, I thought that it was a lookout, but then I saw people rushing to greet the cars and shouting “the benevolence is coming!”. The ACTED team came to me, smiling. Finally, thanks to ACTED, generosity had arrived for me.”

“My story reflects that of more than 20 painters who have been able to use the air compressor and scaffolding to complete in one day work that previously took five days. The increased efficiency and comfort of the work has improved our living conditions considerably. Thank you to the ACTED team”. 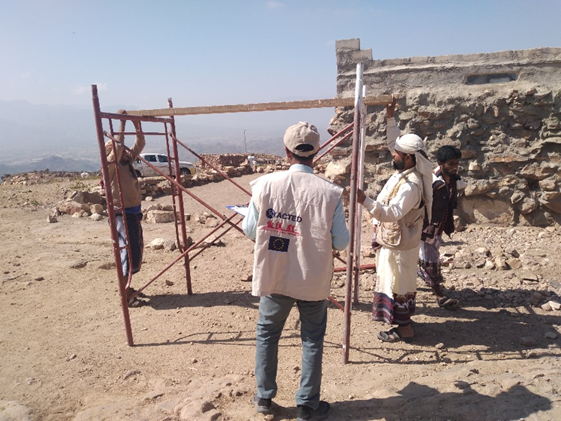 Yemen: “This road is like a lifeline for us.”

12 days into the blockade – We are running out of Fuel, Food and Medicines

Food security and sanitation for displaced families in Yemen