The striking beauty of Kayah State reveals itself as you drive down newly paved streets, lashed on either side by a red clay which washes down from the mountains.

Kayah State had been closed off from the rest of the world for over half a century and in many respects remains a time capsule. Despite its great natural diversity and beauty, thousands of its citizens have left in the face of a protracted conflict, mainly seeking sanctuary in neighboring Thailand.

ACTED is supporting the people of the state to break out from this isolation. Such an outcome can only be achieved through promoting sustainable livelihoods skills and opportunities for the thousands of Myanmar refugees who have settled in refugee camps in Thailand.

A difficult transition towards peace

Nested in the green, lush mountains in the eastern part of Myanmar, Kayah State borders Thailand to the east, Shan State to the north, and Kayin State to the southwest.

Kayah is a small but complex state, rich in natural resources and cultural heritage, but also the victim of a 60-year conflict between the Karenni National Progress Party, an armed insurgency group fighting against the Myanmar government for autonomy in the region.

Despite these challenges, there is reason for hope; since the ceasefire signed in 2012, the economic situation in Kayah has shown signs of recovery. Mud tracks have slowly given way to concrete paved roads and 3G wifi is now widely available. However, despite these positive developments, most families in rural Kayah still struggle to sustain themselves and suffer from malnutrition as a consequence. Unemployment and out-of-school rates, especially amongst youth, remain high.

Unable to stay, reluctant to return

In the past, many fled to Thailand looking for better lives and new opportunities. Most of them didn’t travel far and ended up in refugee camps along the Myanmar/Thailand border, where many have spent up to 30 years.

As humanitarian funding for the camps declines and Myanmar continues to stabilize, this state of affairs is soon set to change; all 100,000 residents will soon have to consider their options for the future.

Even after having living in Thailand for decades the refugees are not permitted to leave the camp area to work. However, most of the refugees are reluctant to return to Kayah State out of fear for a breakdown of the fragile cease-fire agreement and the limited opportunities to create a livelihood for themselves.

Preparing for an unknown future 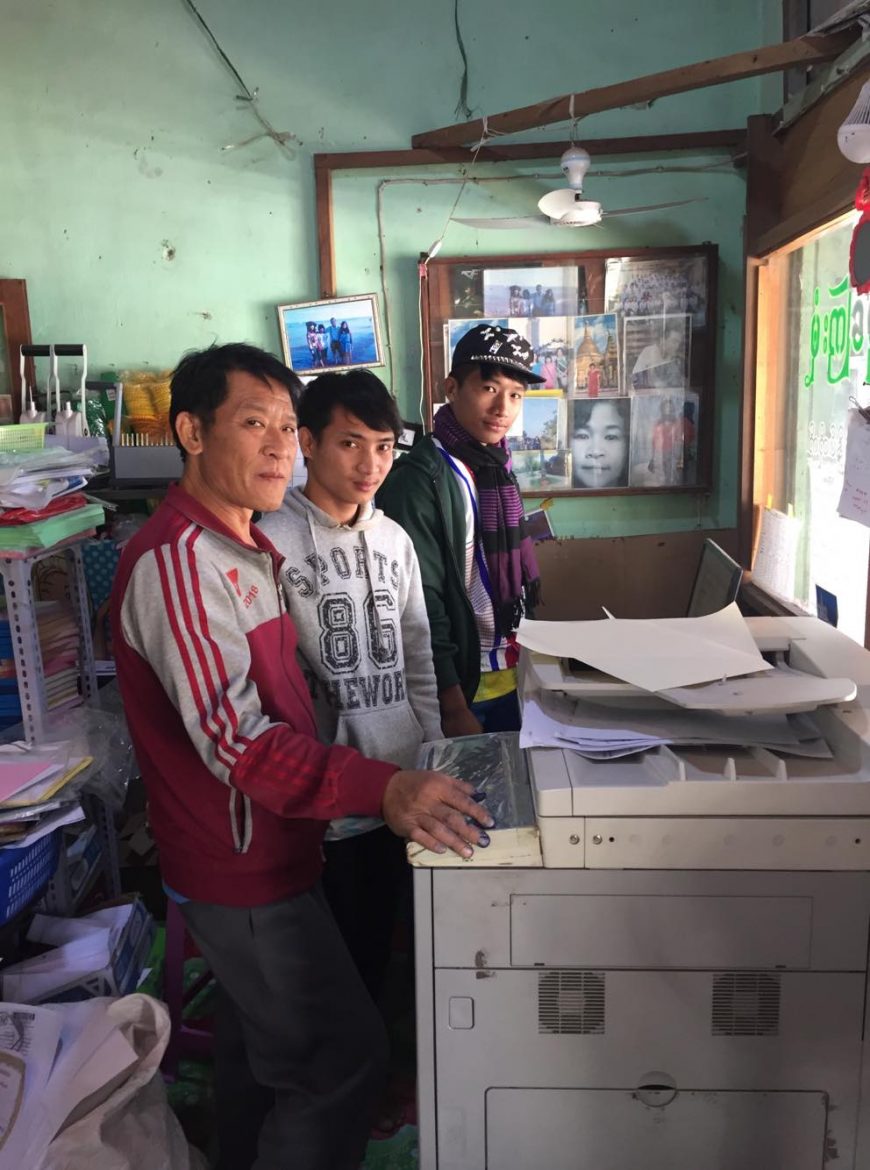 In response to these complex challenges, since 2013, ACTED has provided vocational training courses which focus on improving the skills required to access livelihoods opportunities both in Myanmar and Thailand.

To maximize the impact of the vocational training courses, ACTED also offers internship opportunities to graduates from the course with private sector employers to further develop and anchor the skills learnt in the courses. The refugees have the opportunities to choose internships placement in Kayah State in order to re-establish linkages between them and Myanmar.

Six advanced-level vocational training courses are currently available. They are all designed to match employment needs within hotel management, sewing, hairdressing, computer, electric wiring and motorcycle repair. All of the courses are complemented by a life skills course designed to ensure that the refugees have all the necessary information and tools to jump back into the world outside the camp. How to manage time, make decisions, work in a team and develop a CV are some of the topics covered during the life skills course. So far, ACTED has provided vocational training and life skill courses to over 1,500 refugees.

Experiencing Myanmar for the first time

In February 2020, ACTED met with two of our students who were working as interns in Loikaw, the capital of Kayah State.

Saw Oo, 20, is about to complete his internship at a photocopy shop. During his internship Saw has specialized his skills within computer services while at the same time expanding his interpersonal abilities through dealing with costumers. On a daily basis, he has provided typing services for invitations and songs, publish adds online and copy and scanned documents. He explains: “If I have more than one skill in life, I have more chances of survival wherever I go so I am very happy with the internship.” He hopes to use his newly learned skills to find a job in which he earns enough money to support his family.

Saw’s parents fled from Kayah State 20 years ago as such he has never experienced life outside the refugee camps, “I grew up in the camp, all my friend lives the camp – it is all I know” he says to ACTED. This is his first time visiting Myanmar, a place that was supposed to be his home but now is a foreign place like any other outside the safety of the camp. He explains that his family have been considering returning to Myanmar but is afraid that the conflict will break out again. Saw will share his experiences which might be the last push they need to take the decision and return to Myanmar. 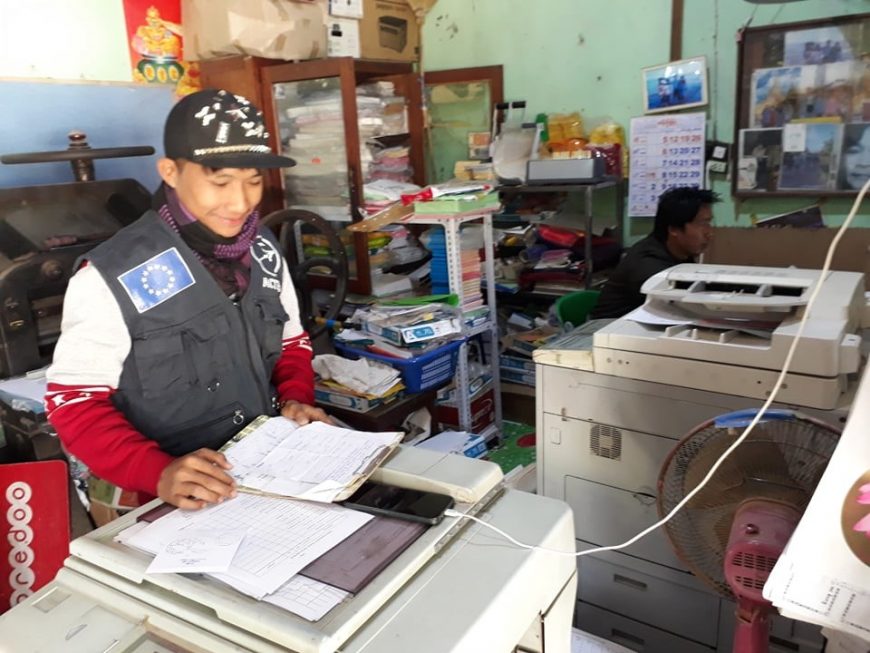 Next stop is a tailoring shop a bit further down the street, here ACTED meets Naw Paw sitting in front of a sewing machine surrounded by colorful fabrics. She fled from Kayah long before the ceasefire was signed.” When we left Myanmar, the situation was not good” she explains, “There was lots of fighting. We were living in the jungle and needed to move frequently from place to place.“

Naw is hoping that her new sewing skills can help her to sustain her family in the camp. She plans on opening a small sewing business, where people can come and get their clothes repaired. She explains: “I am happy that we have been allowed to live in Thailand for so many years but there are no livelihood opportunities for us here unless we get new skills and open a small business.” Naw choose to complete her internship in Myanmar partly so that she could witness for herself the rate of change of the last years. She was positively surprised during her stay and is for the first time since her exile considering returning. 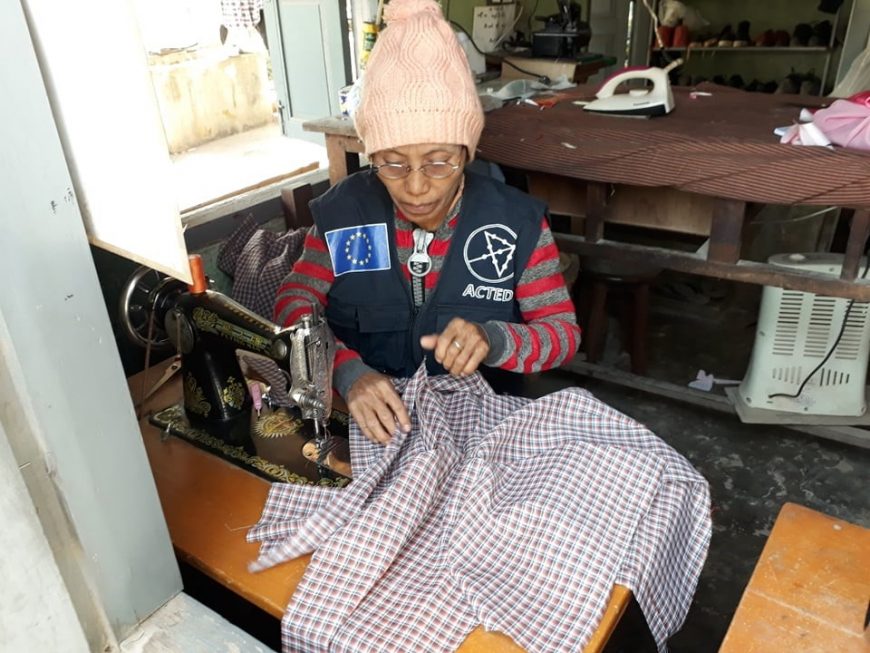 The power of making a decision

As the day is coming to an end and the sun slowly goes down behind one of the mountains of Loikaw, ACTED Project Manager rounds off the day by saying “ACTED most important job right now is to make sure that the interns feel safe and supported when they arrive here in Myanmar. Many of them have experienced horrible things and have big traumas that will never disappear. Everyone is afraid of coming back in case the conflict will break out again. We as ACTED cannot do much to reduce that fear, but we can make sure that while they are here in Kayah, they will have a good experience that they can share with their friends, families and others when they get back to the camp. This way we might be able to inspire more people to return to Myanmar before the funding for the camps disappear completely and they are forced to make the choice.”

It is ACTED’s hope to continue to the important work of preparing Myanmar refuges for a voluntary, safe and dignified return even after this project ends.

Fighting Covid-19 with Myanmar refugees on the Thai-Myanmar border

From camps to a new life: Two refugee women and their American dream

31st March 2020: Refugees in Thailand lead the fight against Covid-19 through mask production

From newcomer to leader: an inspiring woman emboldening her camp community

Photo Story: Training the next generation of Beauty Therapists in Thailand

Teaching for a future outside the camp