ACTED promotes gender equality in the department of La Guajira

In Colombia, all women suffer the consequences of gender based violence and the violation of their human rights. Women belonging to indigenous and Afro-Colombian ethnic groups have been disproportionately affected by the violence resulting from the conflict.

In the of indigenous and Afro-Colombian communities, 65.5% of homicide victims were women.   In  La Guajira, in terms of cases of gender violence, the lack of knowledge of reporting cases results in a precarious performance of the justice system. In 2020, between March and June, 36 women were victims of violence according to the National Institute of Legal Medicine and Forensic Sciences . That same year, in the scope of 3 months, 4 women were killed.

In Colombia, ACTED is committed to prevent and reduce gender-based violence among vulnerable migrant, returnee and host communities in Riohacha and Fonseca, La Guajira department.

ACTED organised an event to raise awareness on the role of women in society and the importance of women’s participation in the process of building a more equitable society. These activities are developed under the framework of the Humanitarian Aid and Civil Protection (ECHO) funded project.

The event took place on the occasion of International Women’s Day, celebrated each year on March 8th to help forge a gender equal world.  15 women attended this event to discuss topics such as women empowerment, equal rights and self-esteem.

ACTED’s team worked with several women in Los Toquitos, Fonseca through a 4-hour workshop. The event was attended not only by women of all ages, but also by men. All the participants had the same objective: changing behaviours to sustainably transform their communities and tackle violence.

Many of the female participants have experienced multiple forms of physical violence in their life. However, this did not stop them from defending their rights and those of their community. Their resilience and work within the community, alongside other women leaders helped them change the mind-sets in their community and influence others nearby.  To respond to the sexual, physical and systemic  violence that women face, ACTED seeks to integrate gender dynamics into its humanitarian interventions. 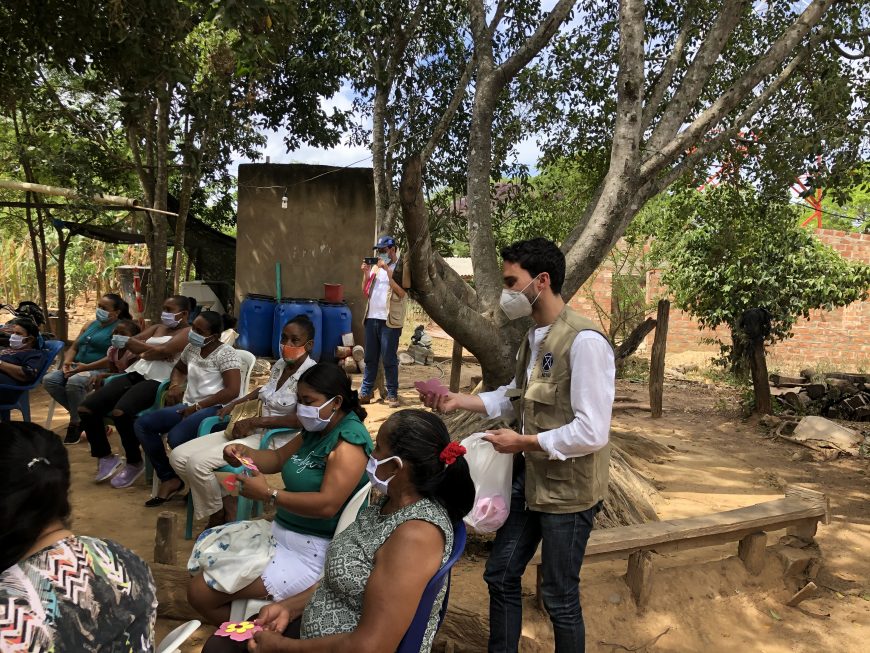 In addition, ACTED supports 2,200 people, mostly women, with gender-based violence prevention and response activities including awareness raising campaigns and the setup of prevention mechanisms, such as the implementation of case management with legal and psychosocial assistance. A CTED also provides legal and psychosocial support to survivors and manages gender-based violence cases.

Sobeida   is one of the women leaders. She has worked for years to defend the rights of her community. When she was 18, she moved to Maracaibo in, Venezuela, where she worked for 25 years.  When the situation in Venezuela started to deteriorate, Sobeida had no solution but to go back to Colombia with her child. Being a single mother with no regular job has been a real challenge, but she has been dedicated to lead community empowerment processes like the organization of training workshops and awareness-raising campaigns on violence prevention, among others.   She is also one of the most visible leaders within ACTED’s project in La Guajira. This project has provided Sobeida an incredible experience, as she says.

The celebration of International Women’s Day was a wonderful opportunity to provide information, especially to women, about their important role in the transformation of society over the years. ACTED was also able to carry out distributions of dignity kits containing  items for personal care to improve women’s quality of life. It helped create bonds between the ACTED teams and the local communities and to focus our actions on the improvement of the access to basic necessities as well as the empowerment of the participating communities.

ACTED works in Colombia since 2019 to respond to the humanitarian needs and consequences of the social and economic crisis taking place in Venezuela.

In Colombia, ACTED provides life-saving financial support to the most vulnerable families during Covid-19

ACTED promotes gender equality in the department of La Guajira