Due to the conflict, Yemeni populations are faced with harsh living conditions. According to the updated Humanitarian Needs Overview (HNO), the number of people in need of humanitarian assistance has increased from 18.8 million to 20.7 million since January. The conflict has had acute consequences on the health system insofar as easily treatable diseases can become a death sentence.

In October 2016, the Yemen’s Ministry of Public Health and Population (MoPHP) confirmed a cholera outbreak in Amanat al Asimah Governorate. According to the World Health Organisation, from 27 April to 29 July 2017, 425.192 suspected cholera cases and 1.895 deaths would have been reported in almost all of Yemen’s governorates. 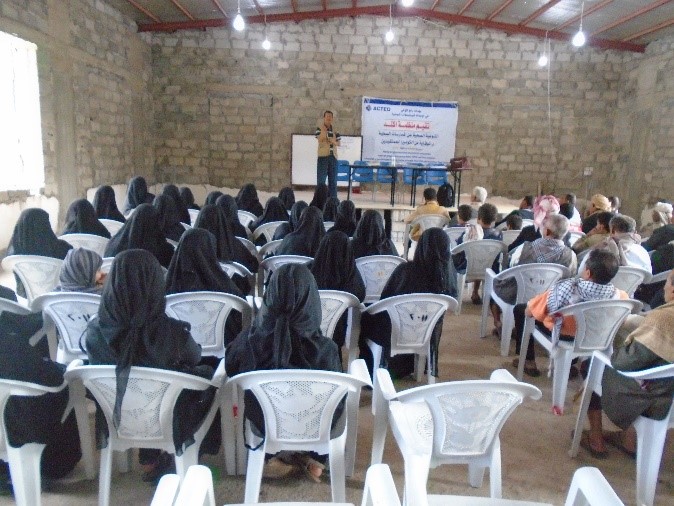 ACTED 2017
Cholera awareness and prevention trainings in cholera-affected communities of Ibb and Al Dhale’e, May 2017

What is Cholera? How can we get infected?

Cholera is an acute diarrhoea infection caused by ingestion of contaminated food or water. The disease can spread rapidly in areas with inadequate treatment of sewage and drinking water. In Yemen, collapsing health, water and sanitation systems have cut off 14.5 million people from regular access to clean water and sanitation, increasing the ability of diseases to spread. Moreover, because of the insecurity, many doctors have fled the country, there is a thus shortage of doctors and nursing staff to help treat and care for those affected. 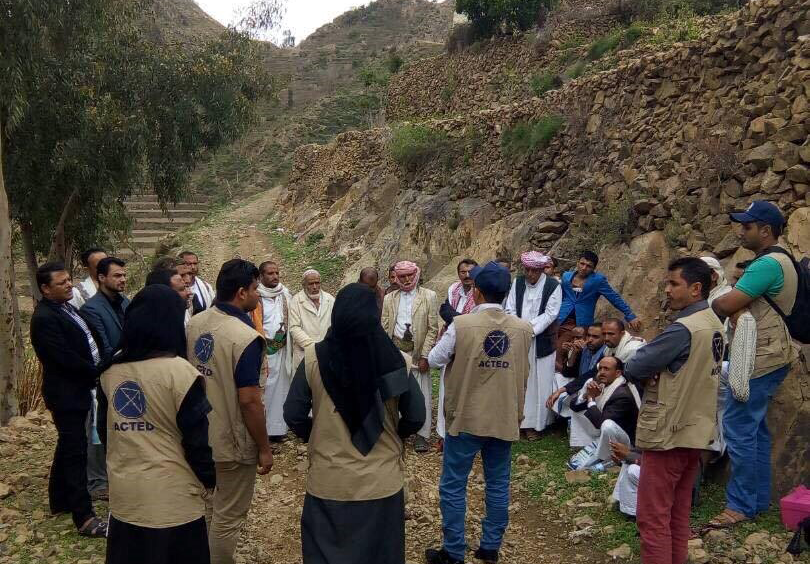 The conflict destroyed most of the infrastructure and undermined agricultural production capacity. Therefore, more than 1.8 million children already suffer from acute malnutrition. Both malnutrition and diarrhoeal diseases create a vicious cycle each making the other more severe and more likely to occur. Diarrhoea deprives the child of the necessary nutritional elements for growth and is a major cause of malnutrition, while malnourished weak children are more likely to fall ill and to die from cholera.

In July, 21% of the Yemen population beneficiated of all Cholera-related activities. In order to contain, combat and prevent the spread of cholera in affected areas of Yemen, ACTED provides joint emergency assistance and prevention interventions at both community and household levels:

On the one hand, ACTED distributes cholera prevention hygiene kits, containing a supply of chlorine tablets, soap, and jerry cans to families in cholera-affected communities with confirmed and suspected cases of cholera. ACTED also ensures families are well-informed and prepared by organising hygiene information sessions to raise people’s awareness on cholera risks and best practices, including on how to best handle and use chlorine in their home.

With OCHA’s support, as well as in-kind donations from UNICEF, ACTED has been able to provide emergency relief to cholera-affected communities in four Governorates. Since the end of April, ACTED has distributed essential hygiene items (soap, jerry cans, washing powder, aquatabs) to 5,154 families in Ibb Governorate, to 960 families in Al Dhale’e Governorate, to 2,000 families in Al Hudaydah Governorate, as well as to 1,805 families in Raymah. As planned, each family also received (or is in the process of receiving) a training on best hygiene practices, in order to ensure sustainable prevention of cholera and other communicable diseases transmission. 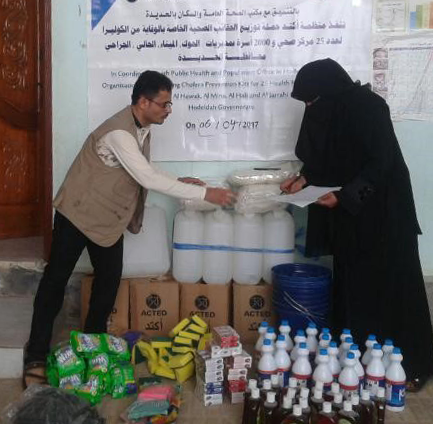 In addition, ACTED has trained and continues to work closely with health facility staff of 100 health facilities across Ibb and Hudaydah, on best hygiene and chlorination practices to ensure water supplied in such infrastructures is safe and clean.

ACTED aims to reach 644,350 people with water, hygiene and sanitation services through repair/rehabilitation/augmentation of rural and urban water and sanitation systems, as well as through delivering of essential hygiene items and trainings, particularly in areas with high food insecurity rates and those affected by cholera outbreak.

An epidemiologist/cholera technical specialist from ACTED Haiti mission has recently joined ACTED’s Program team to ensure a more thorough response, and will be available to support all partner organisations that might require technical support.

ACTED has also been coordinating on the ground and from Sana’a with all relevant stakeholders, including other international and national NGOs, UN agencies, local and national authorities. This is to address more efficiently and more significantly the causes and disastrous consequences of the ongoing cholera epidemic in Yemen.

12 days into the blockade – We are running out of Fuel, Food and Medicines

Food security and sanitation for displaced families in Yemen

ACTED and Welthungerhilfe: Support For Families In Yemen