ACTED Somalia: boosting the livelihoods of vulnerable households through savings systems in Baidoa

Somalia is experiencing its worst drought in forty years, affecting 7.8 million people. Hunger and loss of livelihoods, coupled with political instability, are forcing the population to flee in search of a better life. People are migrating from the countryside to the cities of Somalia, adding further strain on the limited resources available.
While the effects of climate change continue to fuel humanitarian needs, ACTED, with the support of USAID, works to strengthen the resilience of drought-affected communities.

Insecurity, unpredictable rainfall, and rising food prices are affecting the communities. Cases of deaths from hunger have been reported, with more than 1 million people having to flee their homes.

Bay Region has recorded the highest number of new internally displaced people (IDPs) arriving in various camps. This movement adds further strain to the needs of the population suffering from the consequences of the drought in the most affected districts: Baidoa and Burhakaba. Conditions in these two districts have been deteriorating for months, and the population remains extremely vulnerable to famine (December 2022 IPC Analysis).

Political instability and fights against armed militias in south-central Somalia also exacerbates the situation. These unpredictable fights make it difficult for humanitarian aid to reach those in dire need in the inner parts of the countryside. The populations from Bakool and Lower Shabelle regions seek refuge in Baidoa, the town hosting the second-largest displaced population in Somalia, in the hope of finding employment opportunities and accessing humanitarian assistance.

Empowering the Displaced and their Host Communities in Baidoa

Thanks to the support of USAID Bureau of Humanitarian Assistance (USAID/BHA), ACTED, in partnership with World Vision, has been providing opportunities for approximately 5,000 ultra-poor families in Baidoa to meet their basic needs.

To ensure that the assistance reaches the target group, a vulnerability assessment was first conducted to identify those most in need. Persons with disabilities, female-headed families and the elderly were prioritised. The selected beneficiaries received Multi-Purpose Cash Assistance (MPCA), an amount of cash they can use to provide for the vital needs of their families.

In addition to addressing immediate needs, this assistance is designed to support the beneficiaries secure stable livelihoods as a step towards self-resilience. Indeed, every supported individual joined a Village, Saving and Loan Association (VSLA), to increase access and control over their resources. A VSLA is a self-managed savings group whose members pool their savings to create a source of loan fund – allowing them to access small credits and emergency insurance. VSLA aims to reduce the poverty level of the members, empower them and reduce their vulnerability to hunger by enabling them to purchase essentials during the drought.

ACTED conducts financial literacy training for the VSLA members who are then provided with lockable cash boxes, passbooks, rubber stamps, calculators, and fabric moneybags to facilitate the accounting, recording, and safekeeping of the money collected.

The establishment of these groups relies solely on the goodwill of the community. They usually have between 15 and 20 members per group, who choose leaders among themselves. The leaders include a chairperson, secretary, money counters and box holders. The groups follow a constitution, which describes how the operations are to be conducted.

Members make a monthly contribution from the cash assistance they receive, which is recorded in a passbook and a ledger for reference. They also contribute to a social fund which serves as a relief fund to deal with any medical or educational emergency that may befall a member. 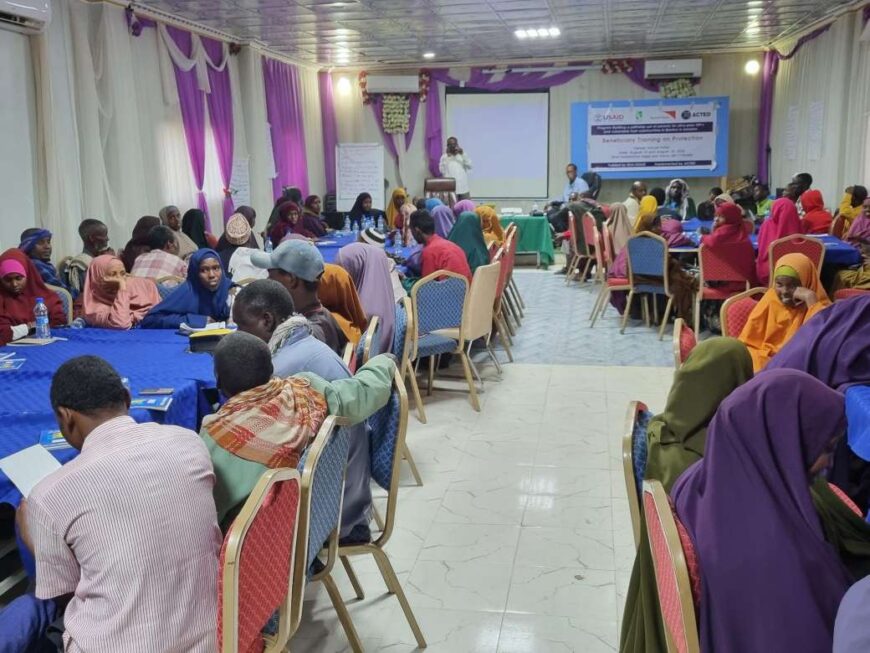 Baidoa has a total of 117 VSLA groups with a total of 2,642 members. After saving, members are eligible for loans, which they must reimburse before the group’s share-out period. Most groups redistribute the money after 11 months, with each member receiving their share according to their savings over that period.

Those who take out loans use them on income-generating activities, such as running a business, while others save to have enough money to purchase parcels of land that they can use to settle down with their families.

Yusuf* is a 38-year-old father of four. He fled from Gurbaan village, Diinsoor town, where he was a farmer.

Due to recurrent droughts, he lost his source of income and moved to the Dust IDP camp. After qualifying as a beneficiary of the MPCA funds, Yusuf used the funds received to open a small kiosk where he sells items like milk, sugar, and tea leaves.

His business is doing well. Yusuf has been able to generate income, which he now uses to buy essential commodities for his family, pay school fees for his children and cover medical bills. 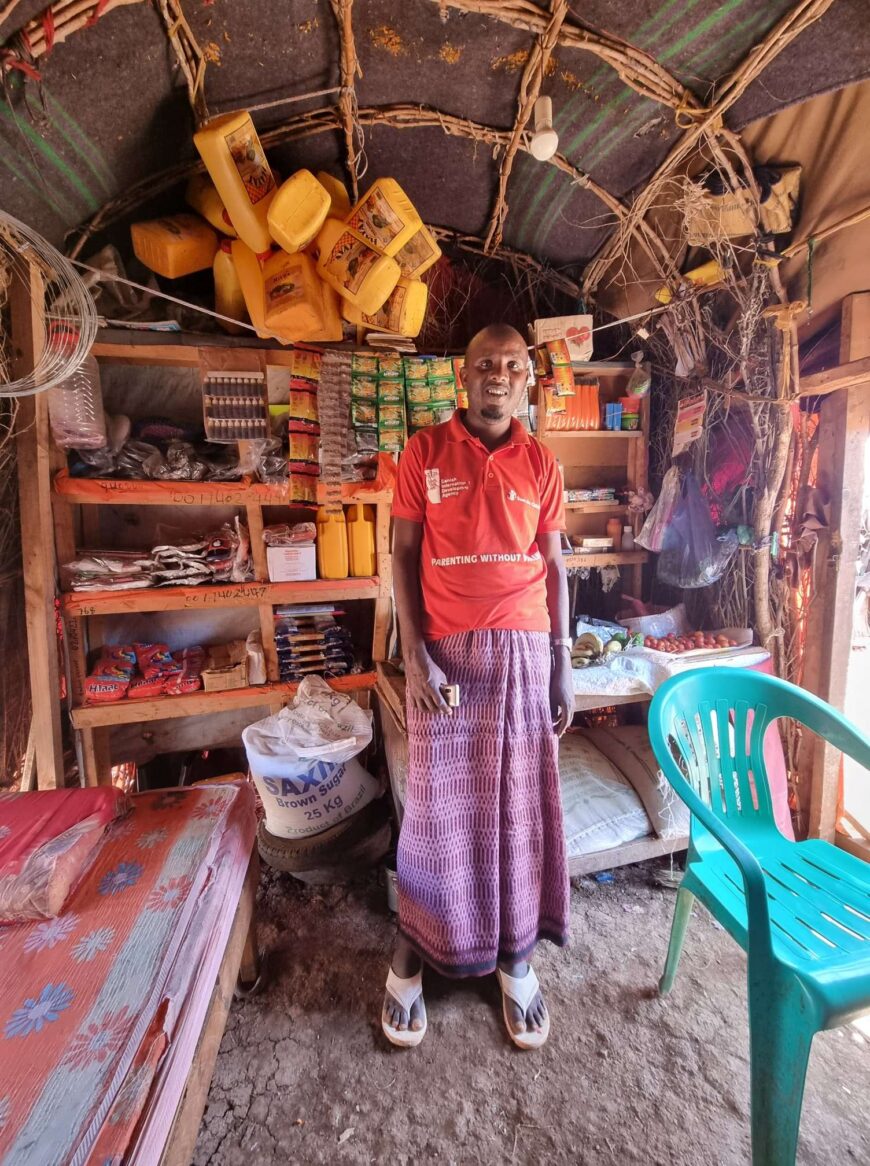 Yusuf in his shop in the Dust IDP camp, Baidoa 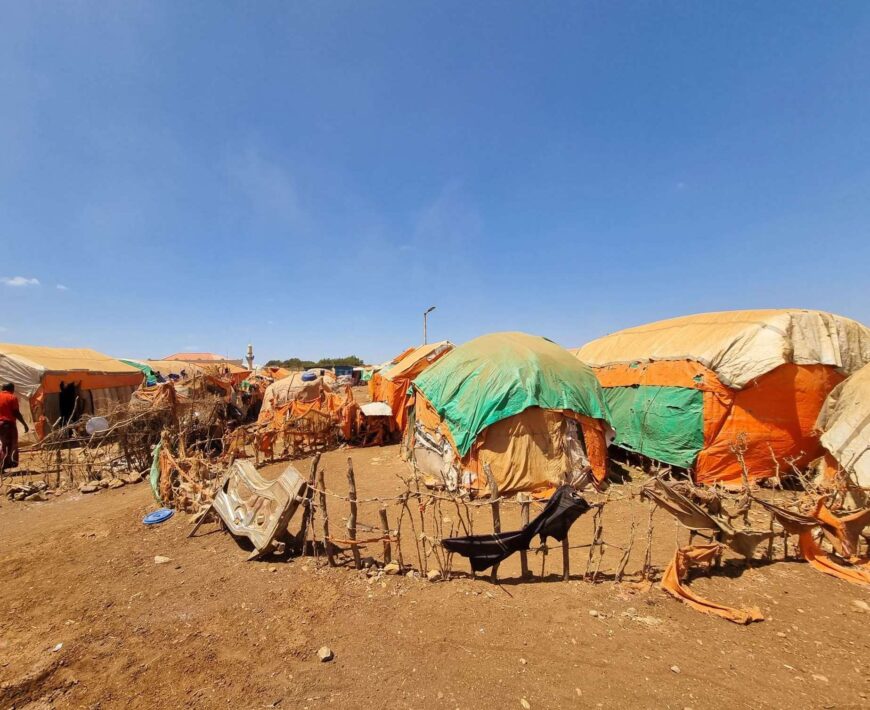 One of the sites in the Dust IDP camp, Baidoa, where Yusuf’s shop is located

This USAID/BHA funded project, implemented by ACTED and World Vision Somalia, provides assistance through cash distributions to ultra-poor people and gives them a chance for resilience.

The drought has affected thousands of livelihoods in Somalia. Yusuf’s story is but one example of how ACTED and its partners are alleviating the consequences of the drought. Providing life-saving assistance and durable solutions to displaced families remains the priority.

*Beneficiary’s name has been changed for protection reasons

ACTED Somalia: boosting the livelihoods of vulnerable households through savings systems in Baidoa