QWANT and ACTED unite in favor of social, environmental and humanitarian commitment 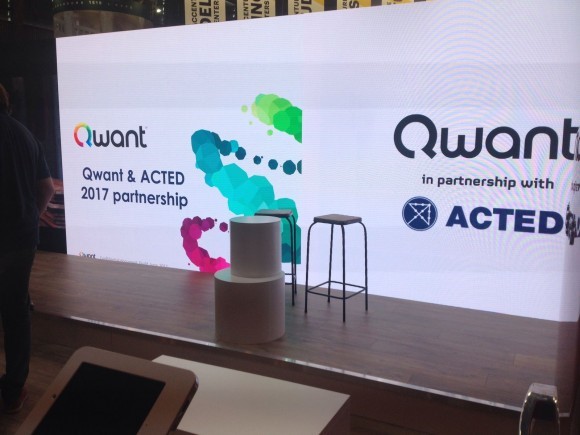 PARIS, June 15, 2017 – Qwant, the European search engine that respects the privacy of its users, is proud to announce an ambitious partnership with the international solidarity association ACTED, which has been working for 25 years in 35 countries. In order to act today and to invest for tomorrow, the two stakeholders based in Paris and active in a global community are bringing together to offer a complementary force to their commitment.

Qwant and ACTED share the same fundamental ethical values and wish to contribute through their partnership to the promotion of a 3Zero world: zero exclusion, zero carbon, zero poverty. This is why the European search engine will value the thousands of sustainable development activities and projects carried out by ACTED thanks to the commitment of 4,600 people.

Qwant also becomes the main sponsor of the World Convergences Forum, whose 10th edition will occur in Paris on 4th and 5th September. It aims to promote digital innovation and the social responsibility of the digital economy, at the service of sustainable development and social and solidarity economy.

“95% of ACTED’s resources are invested directly in its projects with 11 million people,” notes Eric Léandri, President of Qwant. “We have always placed social responsibility as the guiding principle of our project, and it was very important for Qwant to be a strong partner in an ethics NGO that brings sustainable solutions open to all with a willingness Demonstrated to create a positive environmental and societal impact “.

The actions enhanced by Qwant and carried by ACTED throughout the world offered all the simple and participative solutions that will allow Internet users to contribute to a development that is both sustainable and inclusive.

“We are pleased to announce this agreement with Qwant, which demonstrates that humanitarian actors and startups in the digital economy can share common values, ethical ambitions and know how to work together to realize their societal commitments,” says Frédéric Roussel, Director Development and co-founder of ACTED.

Designed and developed in France, Qwant is the first European search engine available to its own web indexing technology, which protects the privacy of its users by refusing any tracing device to advertisements. Unlike the main search engines on the market, Qwant does not install any cookies on the user’s browser, does not try to find out who it is and does not keep track of the queries made. With a warm interface that leaves a lot of room for results, Qwant makes it possible to effectively find the information sought on the whole Web and social networks, respecting a total neutrality. Qwant treats all sites and services indexed without discrimination, without modifying the order of the results according to its own interests or the sensitivities of the user. Qwant was launched in France in 2013, and in Germany in 2014. It responded in 2016 to more than 2.6 billion requests.

ACTED is the second French association of international solidarity. For the last 25 years, the NGO goes the last kilometer: ACTED’s mission is to save lives and support people in meeting their needs in hard to reach areas. ACTED develops and implements programs that target the most vulnerable amongst populations that have suffered from conflict, natural disaster, or socio-economic hardship. ACTED’s approach looks beyond the immediate emergency towards opportunities for longer term livelihoods reconstruction and sustainable development.

ACTED has implemented more than 490 programs with 11 million people in 35 countries thanks to the commitment of more than 4,600 people. ACTED devoted 95% of its resources to the financing of its projects. Initiated by ACTED in 2008, Convergences is the first multi-stakeholder European platform for reflection, advocacy and mobilization around Sustainable Development Goals, associating more than 240 organizations dedicated to a more sustainable and inclusive world. Convergences organize each year the main event in Europe on Sustainable Development and Social and Solidarity Economy.