3 March 2022 - ACTED launches an emergency flash appeal to support 300,000 people affected by the conflict in Ukraine and neighbouring countries. ACTED’s objective is assist an initial 300,000 people, internally displaced or affected by conflict inside Ukraine or who have sought refuge in Moldova, Romania and Poland. 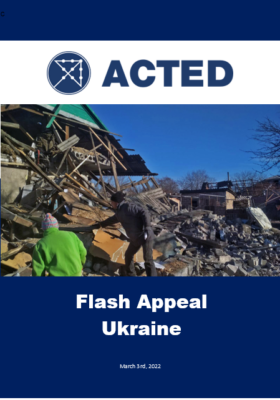 As a result of the military operations in Ukraine that started on February 24th 2022, at least 4 million people have left their homes (source: REACH). Within just a week since the start of intensified hostilities, nearly 3 million people are reportedly internally displaced and over 1 million people (source: UNHCR, 3rd of March 2022) – essentially women, children and the elderly have crossed the borders into the neighbouring countries of Poland (over 604,000), Hungary (133,000), Romania (51,00), Moldova (98,000) and Slovakia (79,000). Approximately 120,000 people were evacuated from eastern Ukraine to Russia in the day before the conflict intensified. According to OCHA, the population affected by the conflict in Ukraine now reaches 18 million people out of which 12 million are in need of humanitarian assistance.

Although the ongoing fighting make the evaluation of existing and immediate needs difficult, we can expect them to massive and widespread, affecting all regions of Ukraine, neighbouring countries and beyond. Populations trapped in the cities affected by shelling, IDPs and refugees lack everything: food and basic relief items, housing, psycho-social support and protection.

The crisis is taking on a new dimension as several major cities are now under fire with civilian populations unable to leave or facing dangerous journeys out. One of the central problems will soon be the disruptions of markets in the areas still spared by the conflict, with high inflation and shortages of commodities.

Current scenarios indicate that as many as seven million people could be displaced if the situation continues to deteriorate, with 18 million impacted, including those already in need and displaced in Eastern Ukraine since 2014.

Our action in Ukraine since 2015

Present in Ukraine since 2015, ACTED quickly mobilised its 150 staff and its networks of local partners across the country. Our first priority has been to provide direct cash assistance directly to vulnerable populations in the conflict zones. Earlier this week, ACTED also distributed hot meals to people waiting to cross the border with Poland for more than 48 hours in sub-zero temperatures. ACTED is now extending its activities to deliver critical assistance to displaced persons in the main hosting regions and to support self-help an local organizations groups that have spontaneously formed and provide assistance in Ukraine. Finally, ACTED is also taking part in the ongoing efforts to provide humanitarian assistance to refugees in the neighbouring countries of Poland, Romania and Moldavia where 3 humanitarian response teams have been deployed.

Considering the immense scale of the crisis, ACTED is planning a large-scale humanitarian response to the Ukrainian crisis, with a three-pronged approach coordinated from our office in Lviv, including the delivery of: 1) life-saving humanitarian assistance in areas directly affected by the hostilities; 2) assistance to populations that are internally displaced and in transit; 3) humanitarian aid to the most vulnerable refugees who have recently arrived in Moldova, Romania and Poland.

ACTED’s objective is assist an initial 300,000 people, internally displaced or affected by conflict inside Ukraine or who have sought refuge in Moldova, Romania and Poland.

To support this major operation, ACTED is launching an appeal for donations with an initial target of 100 million EUR. This will make possible the implementation of 4 types of humanitarian intervention: