Boosting economy and local resilience in Lengima during the drought

Lucas Cheule, a shop keeper at Lengima Village of Laisamis Sub County in Kenya is one of the people who have witnessed the full effects of drought. “People of Laisamis depend on livestock for survival, but due to lack of rain for a whole year the goats and sheep had become emaciated and could not provide meat. We were worried, our survival was threatened,” said Lucas.

Before the emergency cash project, Lucas had closed down shop due to lack of business. His debts were growing and he couldn’t sustain his transactions, thus impairing his relationship with suppliers. Thanks to the ACTED’s cash support, he found an opportunity to reopen: as people regained their ability to pay debts and buy goods, they also started ask for stocks again. 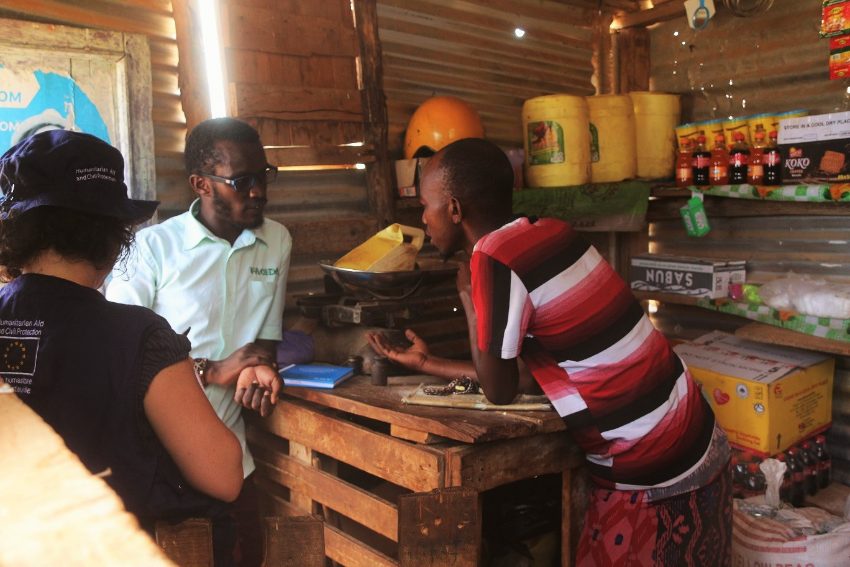 Lucas Cheule talks about the effects of drought on his business and how the cash assistance impacted on his community. Credits: PACIDA

In 2019, the drought has been harsh and extreme in Kenya. From the 1st July to 31st December 2019, ACTED has led the Kenya Cash Consortium – together with Concern Worldwide, Oxfam, REACH/IMPACT and local partners – in order to respond to the crisis and help vulnerable communities in the region.

The confidence in giving out credit in trust increased thanks to stronger purchasing power and higher flow of currency within the village. “People started to smile again. A new lease of life had been given to my customers” he says.

The Story of Mary: improving a family’s living conditions through cash transfer

Mary Pungen, 47, is a single mother of five. She is originally from Laikipia County, from where she had to flee in 2017 due to a conflict, a move which forced her to abandon most of her family’s livestock. Her house was burned during the skirmishes and she had to relocate as an internally displaced person (IDP) in Baringo County.

She has been relying on meagre income as well as help from her relatives to survive.

With the prolonged 2018/19 drought that has ravaged parts of Baringo County, things took a turn for the worse: she could no longer afford to meet her family’s food needs and slipped into debt and worry.

Later, Mary was selected as beneficiary for the ECHO funded Unconditional Cash transfer project implemented by ACTED. She says the assistance has gone a long way in supplementing household food requirements and provided much needed relief from the increased food costs brought about by the drought.

Mary has used the money to buy food, and was also able to renovate her family house. In addition, she bought a goat which she hopes to sell at a much higher price during the Christmas period.

I am very grateful for ACTED for a cash transfer programme that considers vulnerable people like me.

Thanks to partners Concern Worldwide, European Commission ECHO, Pastoralist Integrated Support Programme (PISP) and ACTED, PACIDA (Pastoralist Community Initiative and Development Assistance) has helped to cushion the effects of drought through a mobile phone cash assistance. The M-Pesa based cash transfer has helped many families to withstand the drought that continued to worsen from April and peaked in October 2019.