Three years after experiencing the destruction caused by typhoon Haiyan, ACTED deployed enumerators to assess the current situation of families in Eastern Samar.

Looking back at the situation, massive destruction caused by super typhoon Haiyan left terrible devastation throughout Eastern Samar. It was a wakeup call for not just Eastern Samar, but the whole of Philippines, to be more prepared and resilient for any catastrophic disaster. It also brought home a strong message to be more responsible in protecting our environment, which will ultimately protect people, livelihoods, homes and infrastructure.

ACTED is continuing its commitment to improve the living conditions of families through health and sanitation projects in Eastern Samar. With this, ACTED deployed a group of enumerators to conduct a faecal sludge management assessment in four core areas; namely Guiuan, Mercedes, Salcedo and Quinapondan.

In order to ensure the relevance of the project and participation of the beneficiaries, an interview was conducted with Ms. Joana to share her views on the issue of latrines and septic tank in her current situation.

Ms. Joana is a family oriented person, taking care of her five children. They have been living in barangay Pagnamitan, Guiuan for the past 30 years, a comfort zone for Joana and her family. Her husband brings in the daily income through fishing and shell crafting; a practical livelihood as their home is situated facing the ocean. Joana focuses on ensuring a healthy lifestyle for the family and good sanitation facilities in the home. Although her neighbours have a problem with faecal sludge management, she has not experienced it as her septic tank has not reached full capacity and it is made out of concrete. However, several storms that have passed over the past three years have caused structural damage to the toilet facility, such as to the roof. Repairing these damages however is not a priority at the moment for the family due to financial instability. Should the septic tank reach maximum volume, she is willing to pay for a service provider as long as the cost is justifiable. If this is not the case, then her options will be to either build a new septic tank or temporarily share with a relative or neighbouring house.

Having mentioned that ACTED is intervening a faecal sludge management project, Joana is willing to take part in whatever activity ACTED is going to conduct, “as long as it will be beneficial for the betterment of our lives”, she quoted. 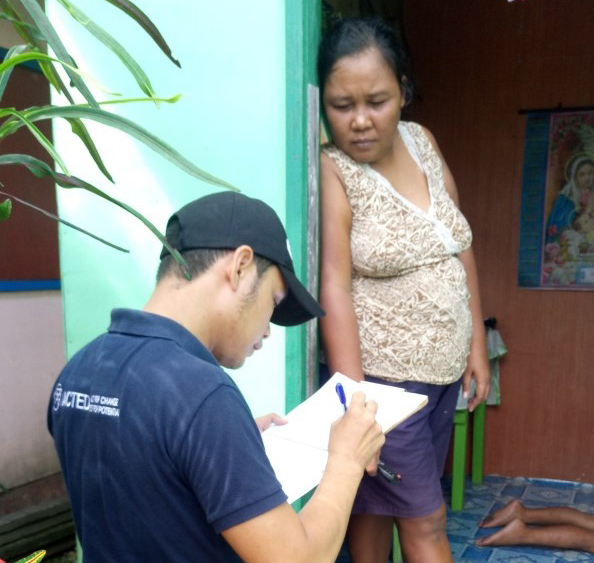 Super Typhoon Haiyan, one of the strongest typhoons to hit the Philippines on November 8th, 2013 caused severe damage in terms of shelter, livelihood, water, sanitation and hygiene in Eastern Visayas. Three years on, ACTED returns to assess the families affected and reflects the progress made in terms on sanitation.

Julie is a full time mother of two young children under the age of 5 and four older children between the ages of 6 to 17. Her husband generates an income for the family through fishing and shell crafting. The family, together with their grandmother, live in a cramped house in Barangay Ngolos, Eastern Samar, with a small kitchen annex in poor hygiene and sanitation condition.

The devastating effects of Typhoon Haiyan in 2013 and the fear of another such typhoon hitting in the future still looms heavily with the family. Although it is dangerous and technically not permitted to live 40m near the seashore, Julie and her family have no choice. They have been given notice from the owner of the private land they currently reside on to transfer their house, together with the toilet facility located outside the main house, to another area. Their only option is to relocate nearer the seashore. The lack of sanitation infrastructure in the new relocation site is worrying for Julie, especially the effect it will have on her children’s health.

Julie was one of the beneficiaries of ACTED during the previous WASH project implemented from 2014 to 2015, which targeted almost 60,000 individuals across five municipalities in Eastern Samar. She received one toilet bowl, 14 concrete hollow blocks and two CGI’s for the construction of a toilet. However, there remain certain gaps in the construction of a ‘good sanitation facility’, namely additional material is required to strengthen the roof and door.

As Julie and her family have benefitted from having their own toilet facility the last two years, she assures that constructing a new toilet with septic tank will be prioritised when moving to the new site. Julia stated that having a toilet “is not only for our heath but for the safety of my 6 children, especially my daughters”. However she added that they will no longer create a septic tank made up of blue drums because it is not sustainable, instead they will continue to create a concrete facility. She does not want to be in the same situation as her neighbours, who currently face the issue of a full septic tank. 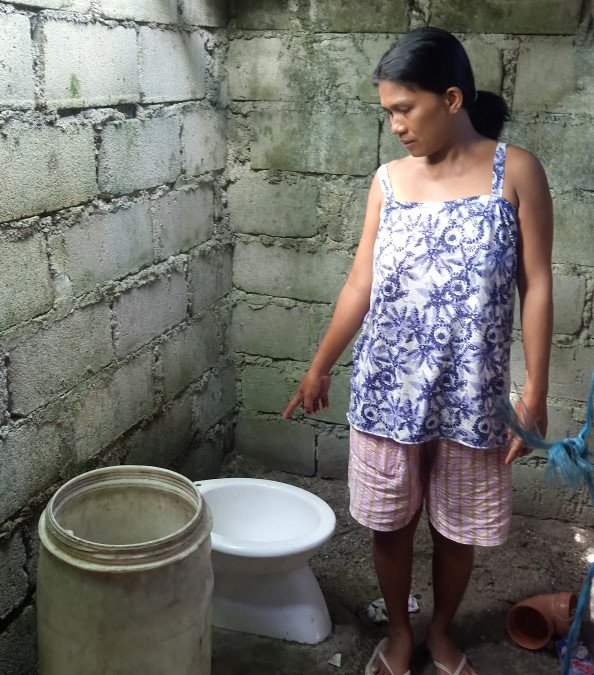 Maria, a 48 years old public servant has been living for the past 10 years in Barangay 2, Quinapondan with her four grandchildren. However, she is currently left alone at home as her grandchildren attend school in another town. Maria does all regular tasks on her own, such as cooking, washing clothes and cleaning the house, especially the toilet room to ensure good hygiene and sanitation.

During the conversation, Maria mentioned that she enlisted the Malabanan service because she was anxious during the previous town fiesta that the septic tank might leak and bring a foul smell to her visitors. However she does not feel like she benefited from the service, in accordance to her expectations, as the septic tank was filled with water after being desludged due to its location near an irrigation system. “It did not turn out to be successful because of the location of my septic tank”- Maria stated.

Enlisting Malabanan’s services cost Maria one thousand and four hundred Philippine peso to be exact. It took only an hour for the desludging of the septic tank using a machine and truck. Since Maria’s toilet has only 1 chamber over hanging the pit latrine, the Malabanan group had to make a hole at the side of the toilet facility to be able to desludge the tank. This hole was then rehabilitated after the desludging was complete.

At this time, Maria is still using her toilet facility since it is still functional; however she plans to add a new chamber to the septic tank so it will become bigger and will last longer before filling up again.