Kenya is facing a devastating drought with approximately 2.6 million people in need of immediate humanitarian assistance, an increase from 1.3 million in August 2016, and this number could rise to 4 million by April 2017 . As a result, on 10th February 2017 the government declared the ongoing drought affecting 23 ASAL counties and pockets of other areas as a national disaster. The National government has also sent out an appeal to local and international partners to support its efforts to mitigate the effects by upscaling drought responses. Following suit, the UN will be issuing a flash appeal on 16th March to supplement gaps in government efforts. In addition the forecast by the Kenya Meteorological Department of March-April-May (MAM) Long Rains shows depressed rains in most part of the country. This will continue to erode the ability of the poor households who are already in crisis levels of food insecurity to meet their basic needs, especially in counties that are currently in IPC 3 (crisis), leading to negative coping strategies (i.e. increased sale of charcoal, reduction in number of meals per day). 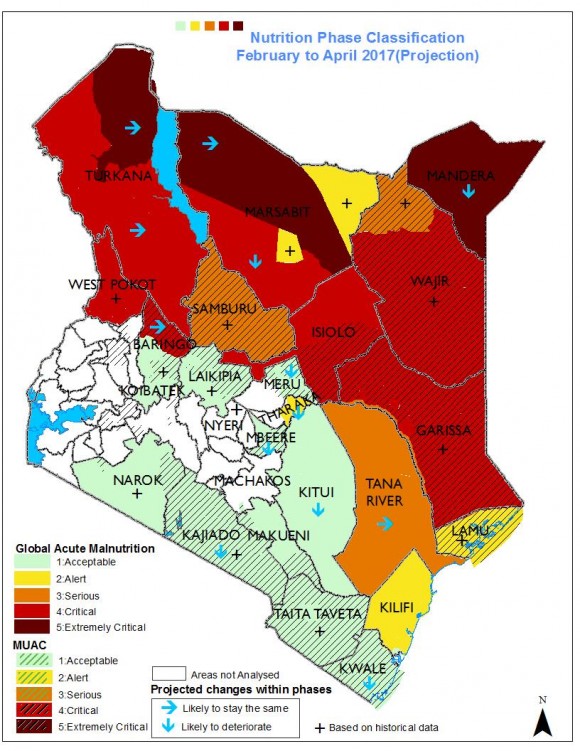 Short rains assessment showed Mandera county as one of the hardest hit counties while long rains forecast (March-May) show depressed rains in most part of the country (including Mandera). Most areas in Mandera are most likely to be in IPC 3 (crisis) and Samburu IPC 2 (stressed) until April 2017. In addition, poor 2016 short rains affected proper growth of marginal crop producing regions which have predicted crop failure of up to 70 % (compared to a 5 years average already resulting in an increase of food prices). Population numbers of people affected by drought stress are increasing and currently stand at 2.7 million (February 2017). Most affected populations are pastoral communities residing in Arid and Semi-Arid counties of Northern Kenya and marginal farming communities especially those whose livelihood income is based solely on agriculture.

The ongoing drought is also taking a toll on the livestock sector with livestock death already recorded in a number of ASAL counties such as Samburu leading to loss of critical livelihood assets. Traders are wary of transporting weak animals to terminal markets to avoid risking losses due to deaths during transportation. Decreased livestock productivity has also resulted in reduced milk production and household milk consumption that will in turn also negatively impact on household food and nutrition security.

Food insecurity is further intensified by the worrying trend of increasing food prices. According to FAO’s latest Food Price Monitoring and Analysis Bulletin, the price of maize in the country has increased by around 30 per cent. With already diminished purchasing power, vulnerable households will have limited access to much needed food.

Additionally, most drought-affected counties are currently facing acute water shortages as well as exacerbated pressure on the few functioning strategic water sources. In Samburu and Mandera, breakdown of water pumps and ebbing of strategic water boreholes due to overuse and declining water table has been reported. There are also growing fears of outbreak of waterborne diseases such as AWD, and cholera in light of declining access to safe drinking water especially in institutions such as schools and health facilities with concentration of people.

Immediate action is required to save lives and protect critical livelihood assets to stem the severe impact of the drought crisis. ACTED intends to intervene in Samburu and Mandera counties to improve food security and protect livelihood assets for severely drought-affected populations as well as reducing the incidence of water-related morbidity and malnutrition by improving access to water and hygiene.

ACTED’s strategy focuses on restoring functionality of strategic water points that represent the only water source for severely drought-affected communities. ACTED will immediately provide fast moving spare-parts for broken down strategic boreholes, in the ASALs critical to both humans and livestock. ACTED will identify damaged boreholes and water points and undertake rehabilitation activities through a private sector company and in collaboration with the County Water Departments and affected communities. As a last resort, in agreement with stakeholders, ACTED can emergency water trucking.

This will be complemented by hygiene promotion activities at water points and through hygiene promoters. These sessions will stress the link between poor hygiene habits and malnutrition, disseminating key information on how to secure food and water and use it safely in order to avoid water borne diseases.

This strategy will include rehabilitation of key water points for both households and livestocks, as well as trainings of water management committees. These committees will be able to keep the boreholes functioning and will also play an important role as hygiene promoters, teaching other community members how to keep water clean (use of chlorination tablets) and how to store food and water safely.

Based on its long lasting presence in the region, ACTED also intends to participate in Cholera surveillance and contingency planning activities, especially in Mandera where the risk of cholera outbreak is the highest. Following hygiene promotion activities and in partnership with UNICEF and technical health actors in the region, ACTED intends to provide support to county public health departments in order to prevent and address cholera outbreaks.

Targeting the most vulnerable

In terms of beneficiary selections, ACTED will prioritize households living in rural areas, as to avoid population displacement to city centers adding pressure to food prices and water resources. Beneficiaries for unconditional cash transfers will be selected on a vulnerability basis, and ACTED will prioritize populations in IPC 2, 3 and 4 as well as households including women and children left behind due to distress migration or newly displaced drought IDPs without asset holdings or livelihoods.

The whole strategy is built on ACTED long lasting relationship with affected communities and the preparedness work that has been undertaken for the past few years. ACTED will build on lessons learned and its established DRR interventions (notably strengthened County Early Warning Systems, community disaster management plans and crisis modifiers) in order to launch a quick impact intervention immediate targeting WASH and food needs amongst rural vulnerable households. Depending on the level of rains in 2017, this initial phase may be scaled up or replaced by a recovery component, aiming at building resilience and preventing further shocks to affect these communities.

Due to arising resource based conflict (over scarce water and pasture) resulting from the drought, ACTED has also been facilitating dialogue between conflicting communities to promote peaceful co-existence and resource sharing, in collaboration with county governments of Samburu and Mandera. Conflict mitigation will be mainstreamed in all components of ACTED’s strategy.