The combination of the Covid-19 pandemic, conflict, climate change, and other global, regional and local crises has slowed global progress towards beating hunger.

Despite continued improvements over the past decade in certain regions and countries, these overlapping crisis inevitably took a toll on global food security. However, the unfavorable outlook is not exclusively the result of ‘Force Majeur;’ the 2020 Global Hunger Index (GHI) report emphasis how the unfairness and inadequacies of the existing food system make responding to such crises more difficult and has hampered efforts to end hunger by 2030.

‘COVID-19 has made it clearer than ever that our food systems, as they stand, are inadequate to the task of achieving Zero Hunger. The unprecedented disruptive force of the pandemic has once again laid bare the fragility and inequities of our current globalized food systems, the threat to global health and food security posed by increasing human impacts on the environment and wildlife, and the need to address these challenges in a holistic, ambitious way. ‘ – Matthias Mogge, Secretary General of Welthungerhilfe and Dominic MacSorley, Chief Executive Officer of Concern Worldwide.

The case studies of DRC and the Greater Horn of Africa both illustrate the impact of overlapping crisis on food security. The DRC faces a tremendously challenging situation of widespread extreme poverty, ongoing armed conflict and political instability, and multiple health emergencies. In 2019, the country faced the second worst food crisis in the world and this year, the GHI notes its levels of hunger as alarming with 41,8% of child stunting, 6.5% of child wasting and 8.8% of child mortality.

Similarly, in the Greater Horn of Africa, the double threat of COVID-19 and desert locusts has had an unprecedented impact on the economy of the countries, making already vulnerable populations at a greater risk of food insecurity. In addition, restriction measures related to COVID-19 have been particularly harmful to local economies and have hampered the response to the locust infestation. Today there are a reported 8.5 million people in acute food crisis in Ethiopia, 6.48 million in South Sudan, 2.1 million in Somalia and 985 000 in Kenya. Levels of hunger range from serious to alarming in the area.

Amidst the extreme challenges faced by communities in the DRC, Horn of Africa, and elsewhere, ACTED is committed to the fight against hunger, supporting populations that have suffered from conflict, natural disaster or socio-economic hardship.

Present in DRC since 2003, ACTED continues to respond to the immediate needs of populations affected by violent conflicts, natural disasters, epidemics and chronic poverty in country. Through emergency food security, the implementation of Water, Sanitation and Hygiene services and shelter assistance, as well as longer term agricultural and economic recovery programs, ACTED teams aim to support communities facing this complex humanitarian crisis. 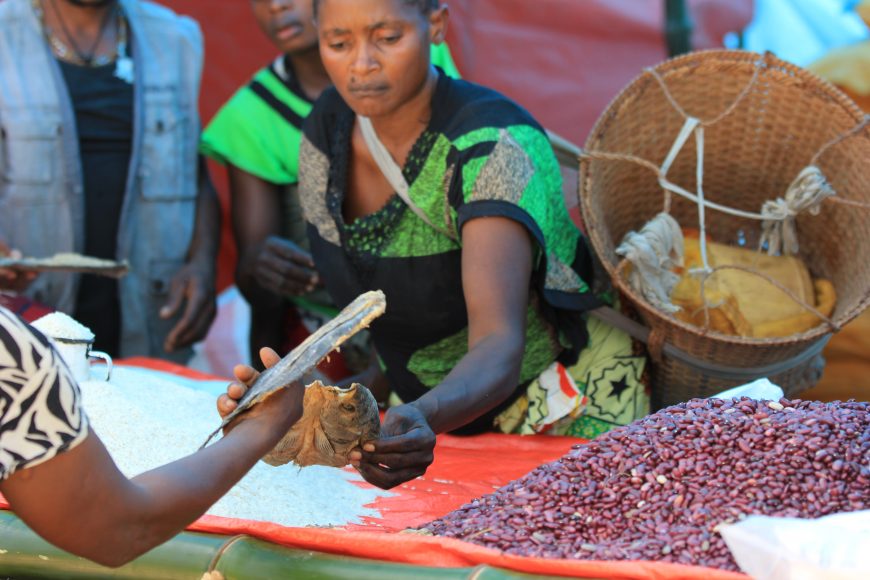 In the Greater Horn of Africa, ACTED, which co-leads the Regional Desert Locust Alliance, an alliance of over 60 National and International NGO’s responding to the crisis, is providing amongst other activities cash assistance to vulnerable communities to meet the food and basic needs of households damaged by the recent flooding and the locust infestation in Kenya. 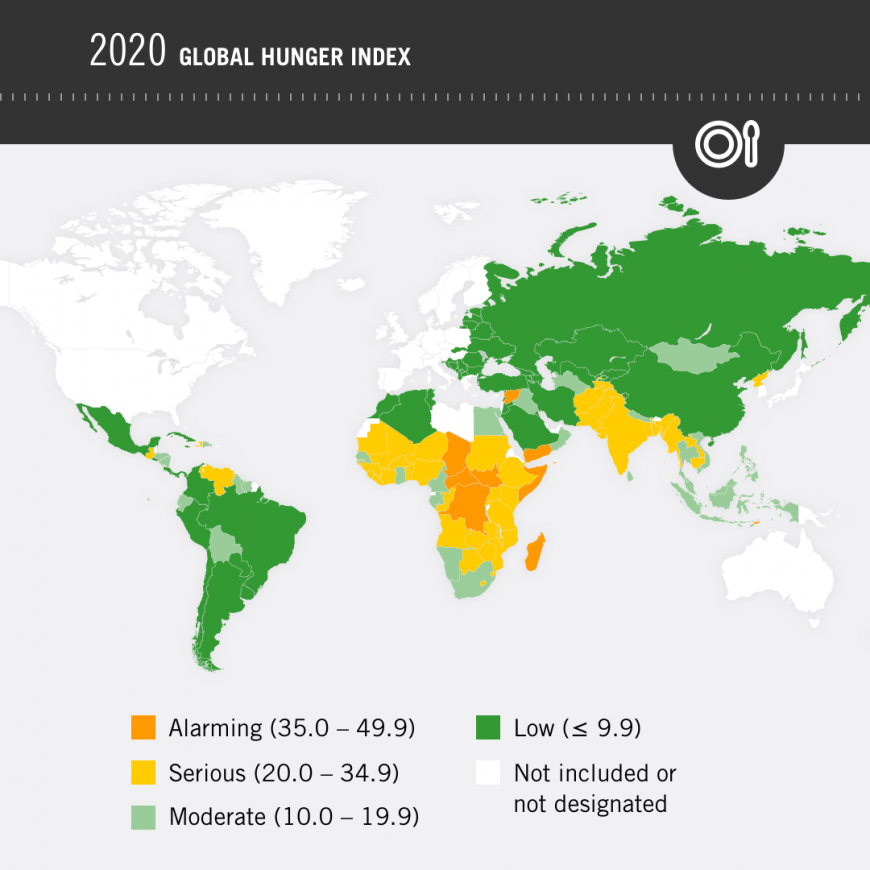 Despite a decline in global hunger since the 2000s, progress remains too slow in many countries. The report highlights 11 countries (including DRC, Somalia, South Sudan, Syria and Yemen) in which hunger is confirmed, or provisionally considered ‘alarming’ levels, an increase of seven countries on last year. A further 40 countries (including: Kenya, Mali, Nigeria, Haïti, Afghanistan, Pakistan, Bangladesh) showed ‘Serious’ levels of hunger.

At the end of 2019, 690 million people were classified as undernourished with 135 million people experiencing crisis levels, or worse, of acute food insecurity. In addition, the number of children who suffer the consequences of hunger remains very high, with 144 million stunted children and 47 million who are wasted across the globe. Many countries, though, show progress against hunger, with 26 countries with GHI scores indicating moderate levels and 47 countries with low levels. 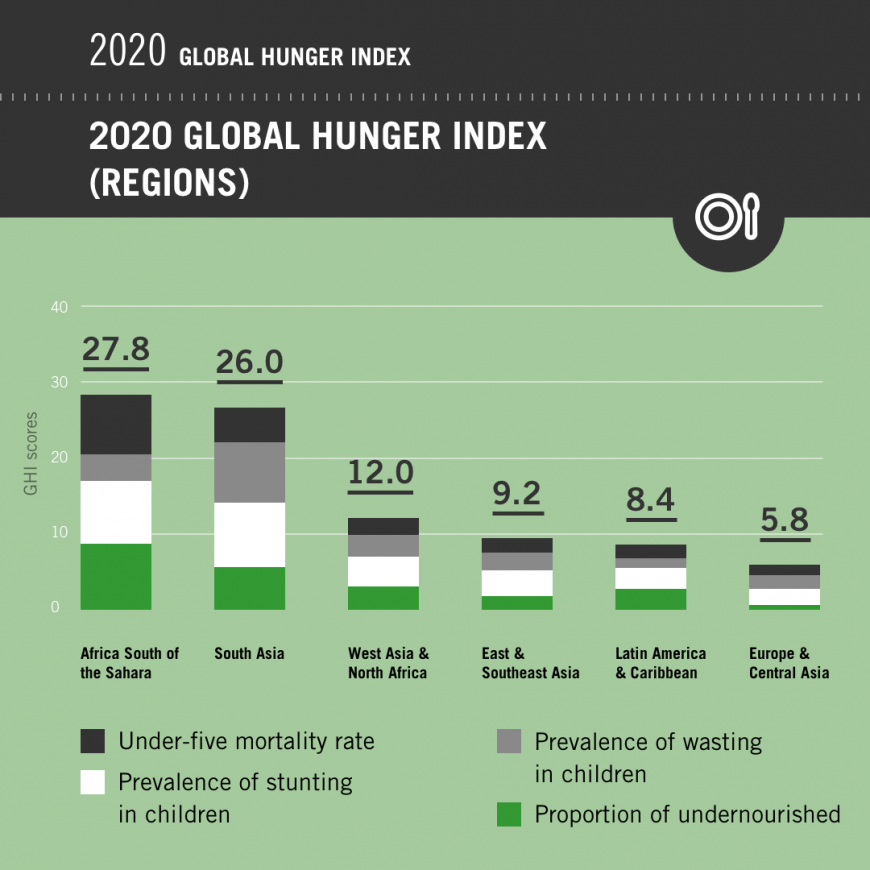 In order to end hunger by 2030, the GHI recommends to reshape current food systems as well as integrating them into a broader political effort. The main recommendations from the report are:

What is the GHI?

Welthungerhilfe and Concern Worldwide have published The Global Hunger Index (GHI) tool on an annual basis since 2006. The aim of the report is to comprehensively measuring and tracking hunger at the global, regional, and national. It is designed to: