Consecutive poor Gu and failed Deyr seasons have severely affected livelihoods and production systems in Somalia leading to a spike in food insecurity and malnutrition with some areas at risk of famine in 2017. The hardest hit are rural populations who have lost livelihoods as well as the newly displaced (including destitute pastoralists and farmers). 2.9 million people are acutely food insecure (IPC Phases 3&4) and this number is expected to rise by June 2017. 84 per cent (421,000) of these are in rural areas and many are already moving towards urban areas as the situation deteriorates, joining existing settlements for IDPs. In the first three weeks of 2017, more than 33,000 people were displaced due to drought in southern and central alone . The drought has eroded household assets and food stocks, threatening lives with high risk for children under-5 and pregnant and lactating mothers. Successive poor rains have affected production levels, reducing availability of food and increasing cereal prices. January Deyr harvests are 75 percent below the five-year average and among the lowest on record (FSNAU, Jan 2017) leading to local food price spikes in not seen since 2011. Limited access to income has led to an inability of the most vulnerable HHs in the areas to meet their basic needs. Subsequent poor diets have contributed to widespread critical levels of malnutrition and there is an urgent need to support rural populations to protect from further asset depletion, loss of livelihood and distress migration to urban areas.

Water needs of populations continue to increase and are worsened by sharp increases in water prices. Reduced water quantity and consumption of poor quality water are negatively affecting the health of many households with increased outbreaks of water-related disease leading to morbidity and mortality in the worst-affected areas. It is projected an estimated 4.5 million people will be in need of urgent WASH services by the end of April 2017 . If the 2017 Gu rainy season is also poor, as currently forecast, and purchasing power declines to levels seen in 2010/11, Famine (IPC Phase 5) would be expected (FSNAU, Jan 2017).

What can be done?

Immediate action is required to stem the tide of the deepening crisis as well as forward-looking interventions to protect assets and promote recovery of livelihoods. ACTED proposes to work now with the dual fold objective of 1) Saving lives and protecting affected populations from destitution, including preventing further distress migration to urban areas and IDP settlements (at least until June, beyond if Gu rains fail or are inadequate); and 2) Restoring livelihoods and promoting economic recovery in the medium term (from June, if Gu rains arrive on time and are adequate). The below action plan is fully aligned to Cluster level strategic objectives and sector guidelines.

Under Outcome 1) ACTED will support:

Under Outcome 2) ACTED will support:

Under both outcome areas, building on lessons-learned from 2011-12, there is a need for enhanced coordination amongst emergency actors as well as concrete linkages with development actors ensuring recent gains are not lost. ACTED will prioritize populations in IPC Phases 3 & 4 and households that include women and children left behind due to distress migration or newly displaced drought IDPs without asset holdings or livelihoods. Across the areas, ACTED is prioritizing interventions under Outcome 1 up to June with a focus on the hardest hit areas of Bay Region (south-central) and Sanaag (north), currently in IPC Phase 4. From June, depending on the spatial and temporal distribution of the Gu rains, emergency interventions may continue or ACTED will transition into a recovery phase.

ACTED has a strong presence on the ground in the worst-affected areas having built relationships and trust with communities and key stakeholders, which allow the Organization to maintain its position at the forefront of humanitarian access. In the challenging and volatile context of Somalia, ACTED remains committed to responsible implementation in line with the ‘do no harm’ approach. To achieve this, ACTED maintains strict security and financial risk management procedures and prioritizes community engagement to ensure accountability to beneficiaries.

Additional resources are urgently needed to cope with the crisis and ensure famine never happens again.

In the North, ACTED is already providing emergency support in the hardest hit areas of Sanaag with potential to scale up interventions in underserved areas of Bari, Bosasso, North & South Galkayo. In the Northern region, more than 80 per cent of land is used by pastoralists and total loss of livestock, destitution and displacement has been reported in some parts of the zone. The livelihood has been classified in ‘emergency’ (IPC Phase 3). Water shortage and depletion of pasture partly due to over grazing has resulted in the emaciation of livestock and voluntary migration to rain-fed areas.There is a need to immediately scale-up life-saving interventions such as water-trucking and unconditional multi-purpose cash support to bring populations in IPC Phases 3 and 4 back from the brink of famine. 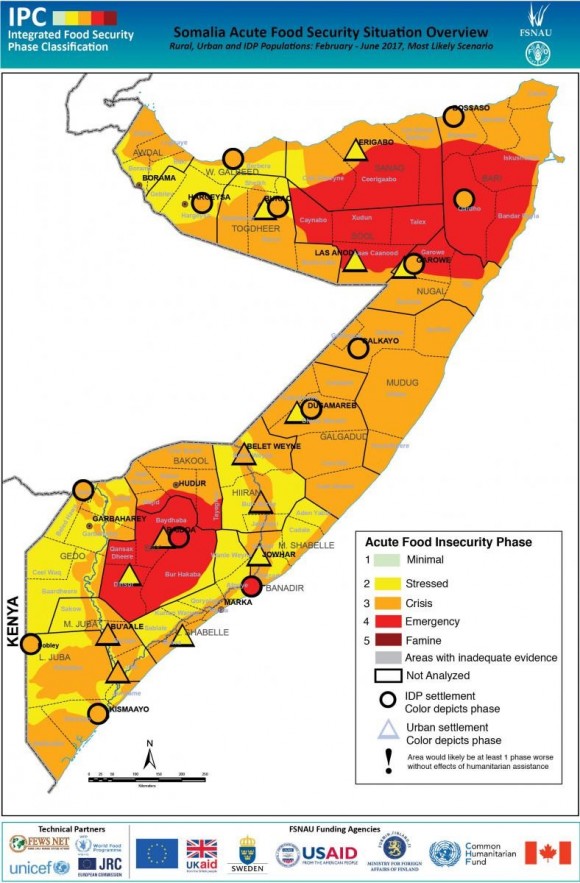 In South-Central, ACTED has a firmly established presence and significant reach in hard to access rural areas. In Bay Region, there is a high percentage of the population in IPC Phases 3 &4 including Baidoa (urban and rural) and Buurhakaba. Moreover more than 7,000 people arrived in the first three weeks of January in Baidoa, increasing the food pressure and the need for a large scale multi sector support in the district. This situation is further aggravated by the cholera outbreak observed in the district since the beginning of 2017. ACTED and other actors have large-scale cash programming up to June. There is a need to prioritize immediate access to water as well as recovery-oriented activities from June to promote asset and livelihood restoration.

In Gedo Region, the situation remains dire although access has impeded thorough assessments allowing for clear classification vis-à-vis other areas. Field reports confirm livelihoods have also been severely affected by the drought with high levels of food insecurity, malnutrition and lack of water. Immediate interventions are needed here under both outcome areas, particularly in hard to reach and underserved districts such as Ceel Waq and Baardheere. Ceelwaq district is severely underserved with very few humanitarian actors currently present. Restricted access, limited funding, and inherent systemic weaknesses combined with the recent withdrawal of key actors, mean there are very significant gaps, leading to serious food security and nutrition concerns. According to the FSNAU latest report (February 2017), more than 250 000 people are now considered food insecure in Gedo region, this represents 50% of the population.

In Kismayo in Lower Juba Region, immediate life-saving interventions to support water are still required although coverage by cash actors is high in urban areas. As of February 2017 and based on FSNAU latest report, 210,000 people in total (42% of the total population) were food insecure in Lower Juba, including 87,000 people in IPC 3 and 4.